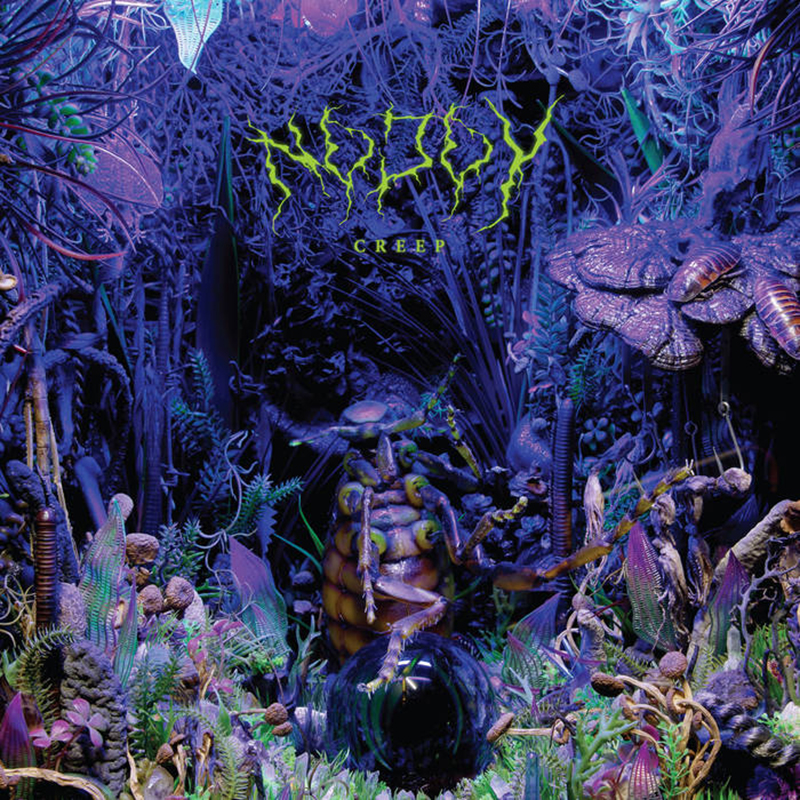 This is the third No Joy review I’ve done, and I’m starting to feel like I possibly have an unfair monopoly on providing my opinion about the band. That, and I worry this is the third time I will assert that No Joy are only getting better at playing with their sound and that we can only expect to keep being caught off guard by them in the future. The only new thing I have to say about this band and their new EP, Creep, is that this one stands apart for the diversity of style in each song. How No Joy are constantly coming up with new things to try when they’re already doing cool stuff always is a mystery to me.

I’ve never been one to really see the Lush parallels that people always draw from No Joy, but the opener of the EP, “Califone,” did remind me of an acute, Lush-style, very-’90s shoegaze—and it’s a style that works well. Migrating away from the steely, dark-pop orientation of their earlier works and also from the fuzz-soaked grunge path they walked on in their last releases, More Faithful and Drool Sucker, No Joy move into a little bit of a new territory where they play with neon-glowing synths and some nice, dark tones. The neon synths can be found in “Fluorescent Dread,” and the spooky wooshes and ethereal sighs slicing through the quick tempo of the unchanging electronic beats reminded me of any This Mortal Coil song if it were remixed into something faster and altogether tinier, and the title suits this idea. It also sounds a bit like Black Marble if Black Marble got pried out of its low-res shadows and saw a bit of sun. It’s pretty much a goth dance song, which really rocks my socks. It doesn’t sound like any other No Joy songs I’ve ever heard, and I love seeing them branch out (to the dark realm of goth—cue smiling-devil emoji).

“Hellhole,” the following song, does sound like the opening to hell. At the one-minute mark, No Joy depart from a somewhat standard progression of twinkly chords and those ethereal shoegaze sounds that Jasamine White-Gluz always does so well, inserting instead an actual growl of bass. I’ve used that word to describe a grungy guitar or bass part pretty often, I’m sure, but it is super low, and super rumbling, and it really catches me off guard when the same tinkling synth from the last song comes sparkling back behind. I really need to see them play that part in real life. The synth lets off at the end of the song, making way for 40 seconds of a guitar part that carries you to the end of the song like you’re on a cool-kid cloud to an indifferent heaven.

“Tearing Apart the Dark,” the last song, employs male vocals that are raspy at times, hardcore at others, combined with chopped-up beats and sharp, cutting guitar parts that create a dark, aggressive mood, which then fall away shortly after White-Gluz’s voice swirls into the mix, dipping the song into a slow calm. When it sounds like the end, the song comes right back again with the hellishness from the beginning, and though it was the song prior that was called “Hellhole,” this is the one that ends up sounding like a dark maw opening.

Although Creep is a cool EP and I started writing about it as soon as I turned it on because it was so interesting, I don’t think it’s one of their best—that only means, of course, that this is still pretty damn good, since their best work is hard to top. The further away from Wait to Pleasure they go, the more I love Wait to Pleasure, but in a happily nostalgic way. The fact that they keep making unique music that can be loud and jarring or aimlessly swirling is what makes No Joy great, and that innovative quality is quite visible in this release. –Erin Moore