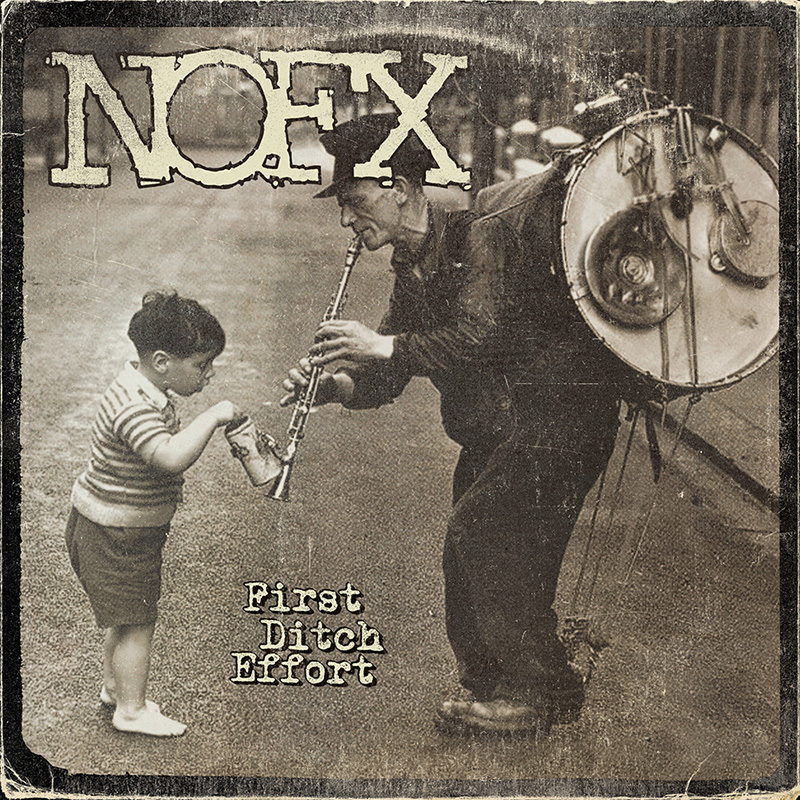 NOFX’s new album, First Ditch Effort, is a perfect next chapter to their unflinching, honest, tragic and beautifully perfect band biography: The Hepatitis Bathtub and Other Stories. NOFX project their own American Idiot—an idiot that can make you think but is right next to you in line at the keg. NOFX have made a career of being silly and slippery-serious at the same time. On their thirteenth studio album, this band is right where we want them—politically pissed off, open-sore transparent, somewhat sober and questioning their sense of balance and gravity in a perpetual, unforgiving, fuck-you spinning world. The punk-rock mission statement has always been to live fast, die young. Be the party, project your image, enjoy the drugs and get out. NOFX understand this business plan—only, they’ve stuck around.

The album gets started with “Fat Mike” Burkett handing over the vocals to Eric Melvin to “Do that yell from the gut.” Melvin’s vocals are immediate and raw, juxtaposed against Fat Mike’s familiar whine and snark—two old-school punk-rock ex-junkies trading vocals about six years on dope. “I was a human trash can / Shortening my life span / Live fast, die tan / I think that was the plan.” The rest of the album, lyrically, is all Fat Mike. He rubs your face across a murderous mile of loose gravel opening wounds from distant parents (“Happy Father’s Day”), self-loathing (“I Don’t Like Me Anymore”), lost love (“Bye, Bye Biopsy Girl”) and bad mothers (“Dead Beat Mom”).

Closing the loop on what it’s like to be Fat Mike in the year 2016, as punk-rock’s jester-in-chief pushes 50, are “California Drought” and “I’m a Transvest-lite.” On the former, Burkett sings about something he is reluctant at doing, and then later, he celebrates by raising the flag to see who salutes. On “California Drought” he sings: “I’m a jest pilot in jux, to positions in a crux / I’m not in fashion, I’m in flux, so they all doubt / I just want some cocaine but it’s making me insane / I think I may have broken my brain so I’m dryin’ out.” On “I’m a Transvest-lite” Fat Mike announces what the world already knows: “I gotta confess that I like to cross-dress / and I’ve been doing it since I was 13.” Both songs are pretty much dump-trucked in the middle of the record and its themes of growing old, adapting, not caring and expanding help center the entire album.

It would be unfair to say that this record is all about Fat Mike when, in fact, the entire band has something to say. NOFX like to promote themselves as a bunch of sloppy, scatterbrained knuckleheads that stumble around in a blind stupor barely understanding their musical instruments, when truth be told, they are a tightly tuned, well-oiled machine that has been in the game for over 30 years. Fat Mike (vocals, bass), Melvin (vocals, guitar), Aaron “El Hefe” Abayta (lead guitar, vocals) and Eric “Smelly” Sundin (drums) are an American punk rock institution in a corporate-run music business that bases success on data rather than heart. NOFX are the honest and transparent mom-and-pop corner-store operation that has survived and thrived over the years. Buy the album, Last Ditch Effort, and the book, The Hepatitis Bathtub and Other Stories, and have the complete NOFX experience. In an election year, vote Fat Mike for president—make America great again. –Russ Holsten