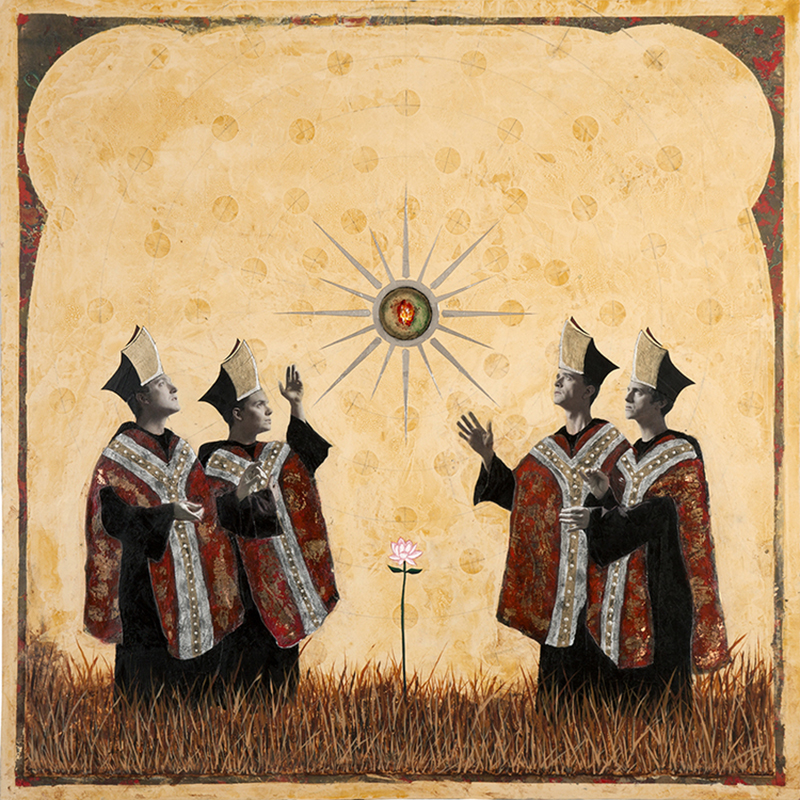 Not Blood Paint
Believing is Believing

Not Blood Paint show off a slew of new, great ideas in their latest release. Shocking jump cuts, a ridiculous number of distinct riffs and the most dynamic pulse I’ve yet encountered make every song on Believing is Believing an adventure. This record is full of things I’ve never heard before, pulled off in a style that’s as competent as it is creative, and it certainly has me believing!

Not Blood Paint produce a fierce sound with strong guitar lines and heavy bass riffs. In between badass eruptions of groove, the band keeps thing sly with crisp cutoffs and phenomenal builds. Vocals drive the sonic exploration and turn rapturous as backup vocalists thicken and accent just the right chords at just the right times. Each song is full of surprises: riffs I never expected, interjected where I never expected them, each so apropos yet so distinct that I’m often amazed that I’m listening to the same song from one section to the next.

Every song on this album maintains a shockingly dynamic pulse. Sections transition unexpectedly, often changing tempo and orchestration. It’s music that I’m forced to bang my head to because of how deep the energy is, yet it’s music that is inherently difficult to bang one’s head to—the groove keeps changing so dramatically and so often that I end up looking like I’m having a hard time trying to sneeze as I shake my head back and forth. Many riffs appear only once before being lost in the sea of catchy guitar licks, which leaves me with the impression that the band simply doesn’t like repeating itself!

Not Blood Paint’s music demands attention and usually keeps things flavorful enough to hold that attention. I felt a little lost when the mix got too bare, like in “The French Song,” but every song features a massive build into something that is invariably groovy. The band is great at going from sneaky, palm-muted riffs to full-throttle explosions of chaos in the blink of an eye. Rhythmic kicks and jump cuts meld each song into a journey that consistently takes me further than I’m expecting. Some songs begin slow and somber, while others get right up into your face—every song, though, climaxes into something epic, unexpected and extraordinary.

Not Blood Paint write songs that don’t fit any of the conventional song structures. As a result, they aren’t stuck replaying a verse or coming back to a familiar chorus. Instead, each transition brings new riffs—new flares in a colorful flow of groove. Every verse is catchy, every chorus is better than the last and there’s always something new happening. The band keeps it flush tight between choppy transitions, keeping the pulse alive and pumping no matter how extreme the shift is between sections.

From mathy fills to head pounding builds, Not Blood Paint make it all sound smooth and natural. Believing is Believing is a feat of style—a style I’d never even imagined possible. These catchy songs got stuck in my head quickly, and I haven’t been able to stop listening to the album since. If you’re looking for a new take on the rock album, this is where to find it—full of chaos, full of groove, full of flavor. –Alex Blackburn