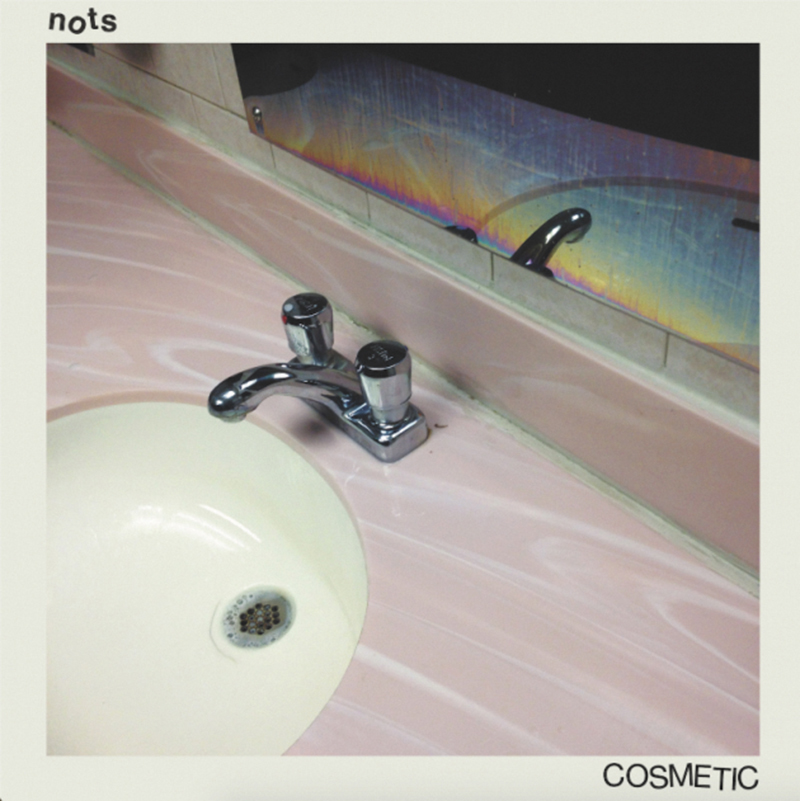 To the bone, punk has always been DIY. One of the newer strains that have mutated out of that junk-riddled corpse is this almost poppy, intentionally amateur garage rock that seems to draw its life and blood from the riot grrrl crowd. Nots are faded the way that that hole-riddled, pastel T-shirt from high school is faded on the floorboards underneath your never-washing-again pile. I don’t know—maybe Alan Vega spit on you once while you were wearing it.

Nots feel cohesive throughout Cosmetic, even if the synth seems out of place in a couple songs. The lead guitar has a scratchy reverberation that makes it seem both front and center and totally out of focus at the same time, all while the drums give off a driving propulsion even in their rhythmic simplicity. Natalie Hoffmann, lead guitar and vocalist, has a voice that seems stamped with the fuzzy technicolor of the golden ’90s, only making herself intelligible in brief spurts that get lost in the mix of a lot of apathetic, almost lethargic, rage.

This apparently is their take on the grunge aspect of the genre. With song titles almost to the point of the cliché (“Rat King” and “Entertain Me”), they manage to hold on to the ethos of the city: a pool of Narcissus with the green muck of mass populations floating around. It’s music that makes me feel like they’re complaining about something without ever actually complaining. The chords can be jarring and pining while the little synthesizer creeps around in the back of the songs, just making little space-cadet noises, which gives off the effect of playfulness even when they’re trying to sound badass. It’s fun and self-defeating, and I kind of like it.

One thing Nots definitely have going for them is that their sound across the album remains varied enough that I don’t ever feel like it’s being sucked into one hard glob. Instead, the music carries us from one end of the parking lot to the other and showcases all the rundown vintage-car wrecks along the way. When we get to the end, where the fence blocks off the end of the lot to some secret city just out of reach, we find ourselves at the beginning, ready to see the carnage again.

One message seems to come across that is something only an all-girl punk band could really portray without seeming to hammer it in too eagerly: the idea of beauty. The title track of the album has this sort of frustrated and anxious wall of noise that actually happens to sit as a backdrop to Hoffmann’s vocals, something the rest of the album doesn’t seem to worry about, as she yells out, “Cosmetic! Aesthetic!” in a bitter and somewhat jealous sneer. You get the image of these girls trying to live the CBGB life where anything went and you didn’t have to worry about your look except to make sure you looked like you didn’t care about the way you looked. Here, just a few decades later, the Nots are trying to hold onto the idea that floated across that decade’s headspace while still trying to be relevant in an image-obsessed world. We’re all still trying to decide if it’s working.