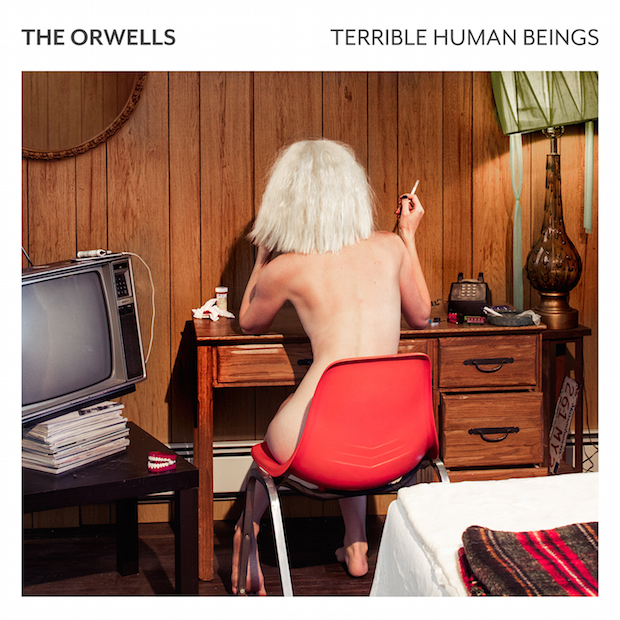 The Orwells are at it again with their third release almost three years after the well-received Disgraceland. With this new record comes a new set of challenges for the group: not only are they in competition with their earlier releases, but they also must reckon with the question of how long rock and roll records are going to keep getting attention. In some views, The Orwells are today’s Strokes: five dudes making rock ‘n roll claimed to be saviors of the genre— youthful, spirited, sexy, etc. But it’s the contrast between the two bands and their respective eras that bring up the obstacles of reality this new record faces. The Strokes got to be in a world where MTV still gave a shit about music, and The Orwells get to hope that a portion of one of their songs play while VH1 transitions between episodes of America’s Next Top Model. The Strokes got to release records when people were still buying them; The Orwells get to have their pennies snubbed by Apple Music and Spotify; the Strokes were able to inspire a generation of kids to pick up a guitar; the Orwells might be some of the last of those kids. However, their situation isn’t all dismal. They are still able to tour as a group and they do have an unprecedented ability to make old rock ‘n roll tropes seem alive and well.

“They Put a Body In the Bayou” came out late last year, signaling another good delivery. It sets a high standard that is quickly followed up by “Fry” and “Creatures,” two tracks that demonstrate the band’s sassy yet relatable demeanor. “Buddy,” also an early single, probably comes out of the record as the best-sounding track. It’s quick, under a 1:30 and about one-night-stands, which has always been a favorite of rock ‘n roll. “Hippie Soldier” and “Heavy Head” keep the record moving at solid rates with tormented guitar laments of “the easy way out” until we arrive at “Body Reprise,” a 1:15 ambient track full of hollow “ooooohs” with a vacant drumbeat that I’m sure Brian Eno could at least nod at.

Wrapping up the record, “Ring Pop” and “Last Call (Go Home)” bring on a noise level that calls across the pond to those 1970s pub rock bands like Ducks Deluxe and Dr. Feelgood, who were as indifferent to the last call as are The Orwells to diminishing record sales. “Double Feature,” clocking at a surprising 7:18 for the band, questions life choices and what chance a man “from the wrong side of the tracks” has. After a few verses and choruses, the band dives into an instrumental break with technical guitar reminiscent of what Television were doing years ago and introducing more howling vocals similar to what was going on in “Body Reprise.”

By the end, this record turns out to be a solid release, but it’s nothing more significant than that. It’s an album defined by the rock ‘n roll tropes it lives up to. Nothing is out of place or wrong—it’s just very familiar. Without a newer cause or figurative idea of what rock ‘n roll could be, it comes out as another record. If this had been released 30 years ago, it would have gotten a fair amount of attention and deserved it. But if it were released 100 years from now, no one would probably know it. Terrible Human Beings is a good record, but because of the times and with all of the other noise out there, it’s just not that exciting. –Austin Doty