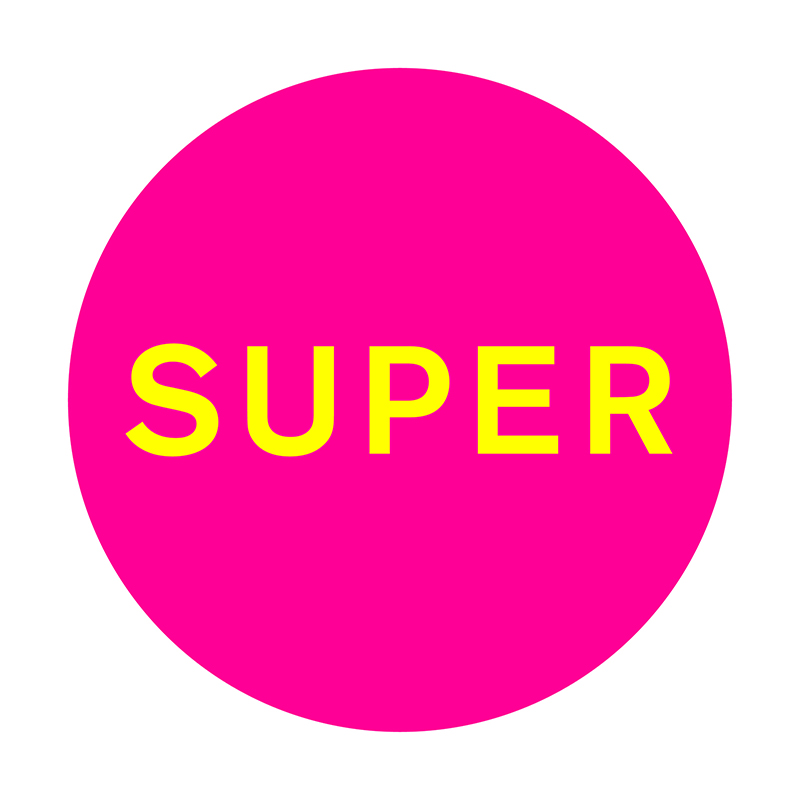 Ever the purveyors of sophisticated dance music, Pet Shop Boys’ Neil Tennant and Chris Lowe return to show us why 35 years in they not only have the goods, but are still thrillingly active in pioneering the sound that made them famous. Seemingly fond of the single-word album title, Super is no exception. The great news is that the title is completely accurate and the even better news is that we have 12 new original compositions (not counting b-sides or remixes) to learn, love and dream alongside to. Indeed, there is a lot happening musically that it takes more than a few spins to take it all in. Super’s party-themed mood—reminiscent of 2013’s triumphant return Electric—is mostly on display, with only the reflective “The Dictator Decides” and the softer-keyed “Sad Robot World” being the exceptions—lyrically, its often politically-themed notions produce echoes of 2006’s underrated Fundamental.

The skewered Spaghetti Western sound of opener “Happiness”—with its twerked keys and backward-filtered background vocals—possesses a dramatic optimism. Even when Tennant’s actual vocals start, they are surprising and effective. “It’s a long way to happiness / a long way to go / But I’m gonna get there, boy, the only way I know!” he proclaims, even as Lowe’s keys pull them back into that dynamic soundscape. Yee-haw!

Lead single “The Pop Kids” is a fine example of the Tennant/Lowe songcraft nearing its zenith. Seemingly effortless in its storytelling, broad in melody and structure, it is infectious and nostalgic within the same beat. This wistfully dynamic view of clubland—told via flashback mode by narrator Tennant—is hard to resist. “To follow our obsession with the music scene / Wherever we went / whatever we did / we knew the songs,” he confesses, and later reflects—with the track’s bass line and drums switching alluringly to a conga-like breakdown—about he and his unnamed college-aged partners’ fear of going clubbing on a “wet Wednesday night” to find no one there. Then joyfully—as the melody throbs along—the partner declares that they never want to leave the feeling of that evening. It is goosebump inducing, with Tennant’s voice transforming into a fine plea-like cooing, as the bass and drumming fully return to their exuberant conclusion.

The infectious Mambo-Italiano meets acid keys of “Twenty Something” (which one hopes will be a single) playfully mash alongside its keen lyrics, observing the title’s characters are living “in a decadent city/at a time of greed,” directly addressing the not-untruthful selfishness of today’s younger generation, with their smartphones, start-ups, and superficial relationships. Ever the astute historian with a heart, Tennant wryly suggests “you can make believe, that it’s all you need,” while Lowe’s hypnotic melody burrows the point home.

Returning to the theme of selfishness—naturally assumed to be directed towards today’s celebrity driven culture—“Groovy” doesn’t hold back in its assault, with Tennant mockingly teasing “look at me, I’m just so—look at me!” while Lowe accelerates the music and drum programs, making them sound almost like a live concert, so much so that it doesn’t take much imagination to picture a self-centered Kayne or Gaga dancing and singing along as though it’s a complimentary ode to their celebrity! Two tracks later, the commanding “Pazzo!” with its alarm-like loop and literal translation—meaning “crazy” or “insane”—is a fitting companion to “Groovy”‘s austere subject matter. It’s always nice to hear Lowe in the vocal mix—even if a bit twisted here—alongside Tennant, With its Italian title and randomly spoken vocals, it indirectly recalls the pairs’ classic “Paninaro.”

The most Electric-like track here is arguably the pre-album release teaser “Inner Sanctum,” which features yet another loose reference to celebrity culture—albeit somewhat internalized—against a frantic drum pattern and a more confessional vocal, wherein Tennant intones: “In the inner sanctum you’re a star / the girls, the guys, they all know who you are,” as Lowe’s keys accelerate upwards and upwards then spin and ensnare the vocals. In fact, so intoxicating is the music that the slight pause between this track and “Undertow” momentarily hint that they are possibly connected, but in fact the latter is grippingly different sounding and memorably catchy; a song trait which the Boys have always excelled at producing.

Earlier, the accidentally topical (assuming) lyrics of “The Dictator Decides” could arguably be a thinly-guised Trump-like inference, where the fictional title subject admits, “my facts are invented / I sound quite demented / so deluded it beggars belief,” alongside warped Casio-like keys. What makes it so much more than a parody, however, is an intriguingly detached vocal, its sombre lyrical perspective is seen entirely from the vantage point of the dictator’s own inadequacies and finally a gorgeous aria that literally distorts as the song concludes. The eerily stark poetry of “Sad Robot World” nearly belies the otherwise hi-energy momentum the previous 3/4th’s of the album has been building up to, and yet it is so captivating, both musically and lyrically. Tennant’s lines are odes to the thankless plight that the invisible computers have in all our lives: “there’s no sleep / no food / no pay / doing as commanded / 24 hours every day / whatever is demanded,” it laments with a jarring realism.

But fear not that this melancholy lasts musically, as fortunately, the party is quickly livened again with a solid trio of triumphant closers, starting with the staccato-like beginning moments of “Say It To Me,” which then builds into a good ol’ fashioned stomper, complete with a speak-sing chorus and dancefloor beckoning bridges. And that is just the beginning: as the album’s thumps and thrills have lead us to the clear crest of pure ecstatic joy, which is “Burn.” It literally is on fire, with its warbled keys and tight drums surging and igniting alongside Tennant—singing in his upper register—boldly stating “We’re gonna burn this disco down before the morning comes!” In an album built upon thrills and innovation, it is a victorious delight. If that weren’t enough, this triptych of joyous ideas is concluded with the beautifully light “Into Thin Air,” which references the album’s earlier political themes, but then makes light about escaping from it all. “We won’t even pack a case / just cash in all we own,” its lyrics teasingly offer. And those sentiments are matched by music that is intriguing and slightly sinister and, like all good album closers—especially good Pet Shop Boys ones—begs repeated listens.

For their second outing in a row with producer extraordinaire Stuart Price, Pet Shop Boys deliver with Super. That isn’t so surprising—it is their 13th original long player after all—but what remains revelatory about the duo is the skill and sheer élan with which they present their music to the world. In a depressingly predictable pop world of too-many-cooks-in-the-musical-kitchen in both writing and producing, it is refreshing that synth trailblazers Lowe and Tennant remind us that great albums—in both songwriting and execution—need not be overproduced to be good. Super succeeds in the joie de vivre department and then some.

Super is released digitally and physically on April 1, on the Pet Shop Boys’ own x2 label, via Kobalt Label Services. Lead single “The Pop Kids” was released both digitally and on CD on March 18,  and features new b-sides and is most notable for the dynamic extended ‘Full Version’ of the title track. Great remixes of the track were also released digitally the same day.