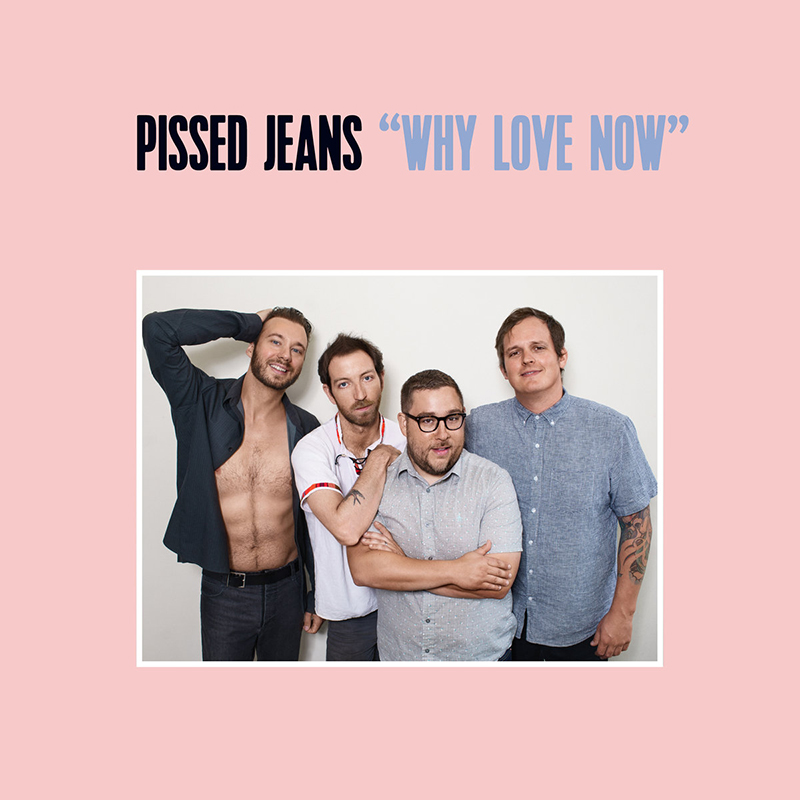 Rock music should have evolved from the late 80s punk/hardcore scene into something beautiful and strange. It didn’t. It evolved into Motley Crüe power ballads at high school senior proms. Guns N’ Roses brought the best part of the Rolling Stones back, Jane’s Addiction made things weird, but it was the Nirvana Nevermind time-bomb that scorched the earth. What followed was grunge—its angsty, Black Sabbath–sludge fashion show was supposed to be the phoenix and rebirth. It wasn’t. Its hostile takeover turned into a drugstore heist in the basement of the police station. Before you knew it, the whole movement was bought, sold, captured and hanged at dawn. Back to the ashes. Rock music should always sound like Tarzan fighting gorillas in a swamp crowded with pythons and sludge oil. Always! And if you’re lucky, you have a frontman who sounds a little like Lemmy Fucking Kilmister!

On their fifth album, Pissed Jeans almost succeed at this blueprint. Why Love Now is an album about modern man heading headfirst into the time of Trump—bored, paranoid, sexually repressed, regressed, confused and alone. Songs about webcam love, office fantasies, being furniture, yogurt, knee repulsion and a worldwide-marine-asset financial analyst occupy this complicated, angry jigsaw of a record. Why Love Now is produced by rock icon and no-wave singer/poet Lydia Lunch and metal producer and Philadelphia legend Arthur Rizk (Sumerlands, Eternal Champion). Cult author Lindsay Hunter (Ugly Girls) was invited in, and she contributes the stream-of-consciousness track “I’m A Man,” which helps tie the perfectly unhinged record together.

Matt Korvette (singer), Brad Fry (guitar), Randy Huth (bass) and Sean McGuiness (drums) offer us a mirror of an album that we hold up to see what assholes we really are. The track “The Bar Is Low” does just that. It starts out sneakily close to a pop song—McGuiness’ opening drums sound seconds away from “My Sharona.” Korvette doesn’t allow that to happen as he sings, “I’m a picture of a noble guy / Now let me explain why. It’s a story of a guy that could have “climbed a mountain, but barely walked up a hill,” an absurdist example of a man that represents “the speed of evolution getting slower.” The opening track, “Waiting On My Horrible Warning,” is about a character waiting around to have the cancer set in. Korvette groans, “Back thrown out / Just trying to tie my shoes / I used to play punk / Now I’m singing the blues / Just waiting for a headache that never goes away / Just waiting for a lump that gets bigger everyday.”

Korvette continues to introduce us to more disillusioned characters throughout the record: “Ignore me, Please ignore me / You should ignore me / It’s been five minutes / Let’s make it 10 / Proud to be useless / I’ll keep calling in” (“Ignorecam”); “The only thing you could do / Is to be sexually untrue” (“Cold Whip Cream”); “You are not as perfect as me / If I could have you, I wouldn’t want you anyway” (“It’s Your Knees”). Finally, with “I know I’m ignored / Too often I’m so bored / And once a day is enough to feel adored,” “Activia” is a song that sounds a little like masturbation, but isn’t that what rock n’ roll is about anyway?

This album is not perfect, but it’s heading in the right direction. I hope this band continues pissing in their jeans! –Russ Holsten