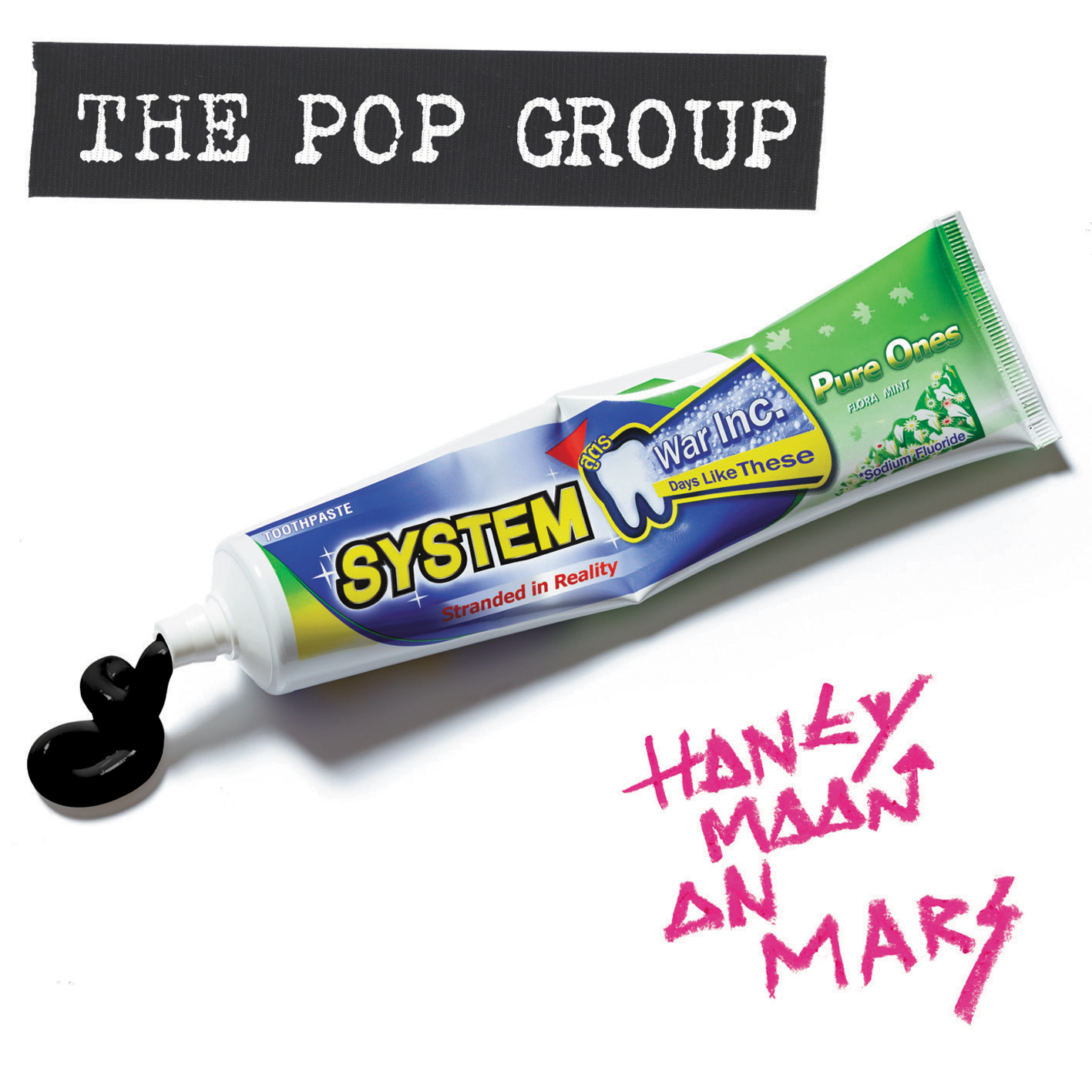 The Pop Group | Honeymoon on Mars | Freaks R Us

The Pop Group
Honeymoon on Mars

Before reading on, prior exposure to The Pop Group is mandatory before listening to Honeymoon on Mars. It’s not because this new album is some radical departure of what has come before, but rather, it seems to capture an essence of the band’s chilling and obviously progressing sound, so knowing where The Pop Group come from is beneficial for your health.  Honeymoon on Mars opens up with the track “Instant Halo,” a number that defines the feeling of the album as it captures an overwhelming, synthetic feeling, themed by their post-punk madness. In other words, it’s a noise that devastates whimsical hopes of a brighter future with sounds of theatric urban decay and is an experience that would be worthy of a symphony played by the damned. No doubt, this is an intended consequence of the music, which comes from the storied legacy of a band that means to provoke and inspire protest. This all can be heard throughout Honeymoon on Mars, but particularly with tracks like “War Inc.” Some other tracks worthy of special mention should include “City of Eyes,” “Little Town” and the single from the album, “Zipperface.” Again, a prior initiation is suggested, as The Pop Group are not a group that only delivers solid albums—they are also a group that has, for decades, planted seeds of radical rebellion and continues to practice what they have preached.

Honeymoon on Mars was produced by Hank Shocklee (producer of the first three Public Enemy albums) and the legendary dub reggae artist Dennis Bovell—a friend of the group who also worked on their debut album, Y, in 1979. This record comes during a year that has also seen the re-release of For How Much Longer Do We Tolerate Mass Murder and the bootleg The Boy Whose Head Exploded—which came with a bonus DVD of Don Lett’s archived Pop Group performance footage. Both were released through The Pop Group’s label Freaks R Us and should have your attention.

With so much available this year from The Pop Group, it may be a challenge to know where to start. It’s almost like a three-course meal of radically relevant music that ought to agitate and educate. These cats aren’t fooling around, either. The Pop Group doesn’t just play one style of music—they draw from all sorts of inspirations, like jazz, funk and reggae. It’s all mixed up into sounds that excite and make you move against a seemingly crushing reality that invokes thoughts of despair. This is rebel music with actual meaning from those who walk the walk. To say the least, there are not enough groups like this one, which talks about the importance of standing against the ever-apparent, increasing hate in our society and the very real threat of an approaching dystopic future. The Pop Group do just that. Be sure to note that their brand of post-punk music stands opposed to a world wrapped in complacency and dares to demand for something more.

Honeymoon on Mars hits record shops on Oct. 28. Be sure to check out The Pop Group’s already impressive catalogue and dig their solid tunes. Then, after a lengthy immersion, grab this record, as it will be an essential part of your library. –Nick Kuzmack