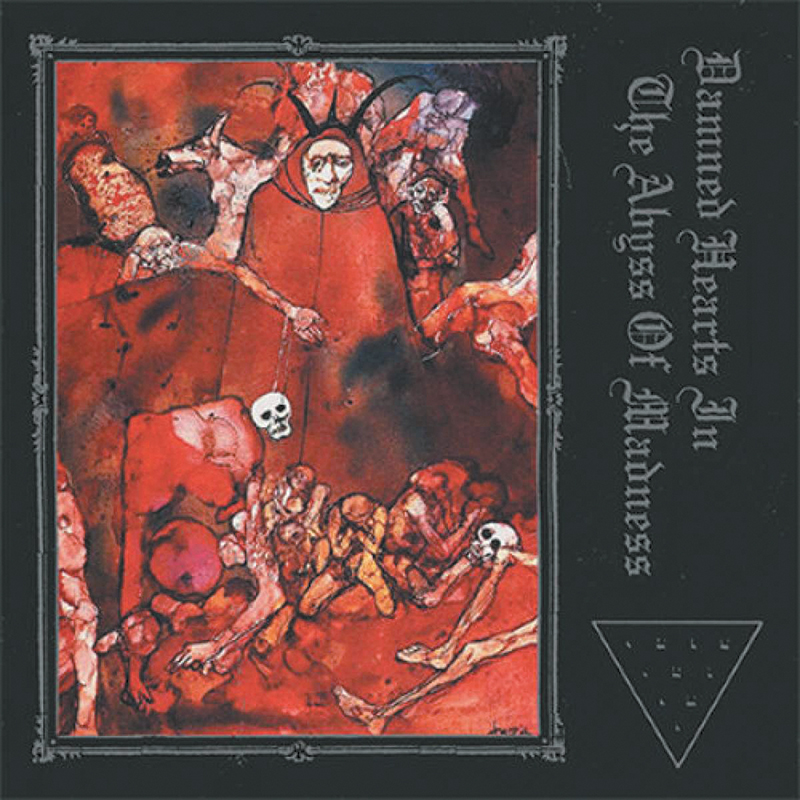 Review: Primogenorum – Damned Hearts in the Abyss of Madness

Primogenorum
Damned Hearts in the Abyss of Madness

In so many ways, an adjective can be a subjective word. Take “happy”—it’s pretty subjective, as one person’s happiness may be different from another’s. In my case, for something to fit my category of dark, especially in music, it must be beyond bleak. It must make me feel like I need to go bathe in sunlight, go for a walk or take a shower, just to get the darkness of it all awash from me. I don’t have much background about the band other than that the lead singer is from the Ukraine—this adds to the darkness of it all.

The sound of these eight, murky songs, layered yet hollow, creates a sonic fog so dense that it feels like I’m weighted. Oddly, the songs don’t ever feel fully directional. The lack of harmony is prevalent, and it makes things disorienting as hell. When the speed picks up on the second track “Hecatomb,” the production is a bit fuzzy, with echoed vocal scowls and layered guitar effects. The drumming is clear and distinct, but when the cymbals arrive, they add a tin-like effect to the music. There is a duality to the album—depending on the volume at which one listens—leading to disturbing, altered states of mind. On lower volume, the feeling is again murky ilk with a slower, more sinister edge. At high volume, the listener is blitzed by walls of intense sound that resonate long after the 37 minutes of playtime are done.

More oddity comes by way of the track “Dead Calls My Name.” There is an interesting use of guitars that comes up early in the track—a sort of high-pitched scratch. For me, it feels like an unwelcome voice is coming in. This strange introduction ignites the inner, abysmal side of my mind. I get this feeling in my head that the song is talking to me in a language I don’t understand, but if I’m not fully focused on the song, I get lost in that voice and cease to hear the music. The ultimate strength that Primogenorum display is the depth and versatility of the songs. Each one brings something unexpected, from disparaging, slow moments to hyper-intensive blasts. The dynamics and qualitative changes come effortlessly. Some songs have odd melodic moments, such as the portions when the guitars are not distorted. The songwriting is never limited to one style or range, yet it’s nothing that goes outside the realms of black metal. This isn’t merely an aurally intensive experience; it can become physically demanding to move through the thick fog that it exudes. Any given musical form aims to convey an emotional experience or response. What I thought was going to be a sort of lo-fi black metal album—with slow moments turning into some faster black metal moments—completely went off the rails. All the unexpected moments brought out some darkness I have never encountered before. It is, in a way, a double-edged sword: I enjoy the album, but also, it’s dangerous, as the album title suggests: Damned Hearts in the Abyss of Madness. The more I listen to the album, the further into the abyss—or down further into a blackhole—my mind wanders. Listening between the lines here is essential—Damned Hearts is one of the darkest of the dark albums I have ever heard. –Bryer Wharton