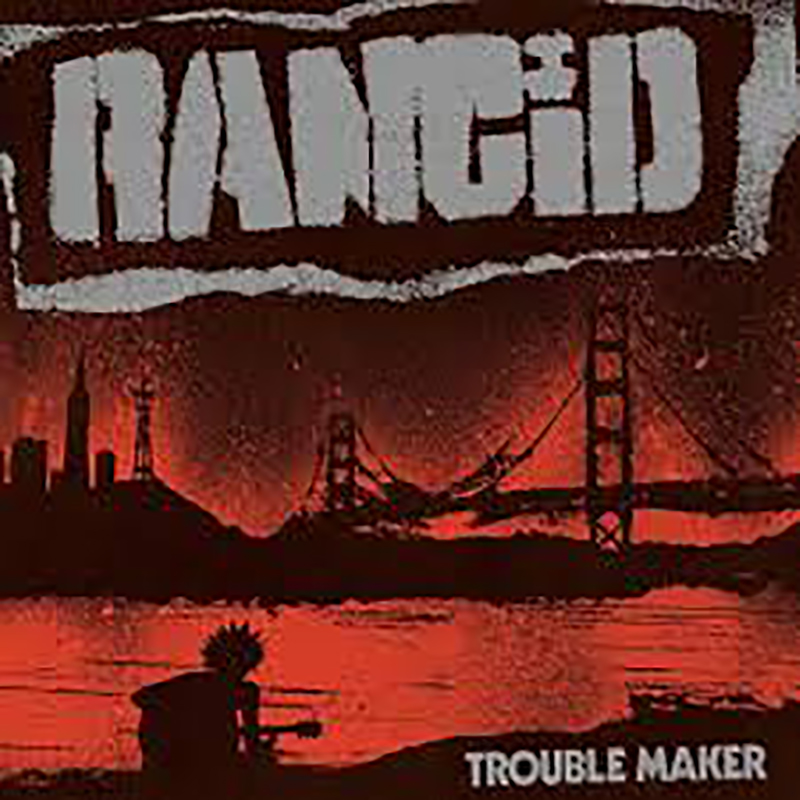 You know, being in a punk rock band, especially one that has been around since the 1980s or ’90s, must be the most artistically challenging thing ever. If there’s anything I’ve learned in all my years of listening to punk rock, it’s that you’re damned if you do and you’re damned if you don’t. When it comes to your audience, releasing new music is like walking on eggshells—you’ll be plagued with comments like, “It’s not as good as their old stuff,” or, “It’s just the same shit they’ve been putting out for years. Where’s the variation?” Granted, there’s very little headspace in branching out to new forms of music while still identifying as a punk band, but really, the punkest thing to do as a band is to just write what you want to write. That having been said—onto Rancid’s Trouble Maker!

While I have always loved Rancid and their music, I can’t deny the difficulty of being void of filler for albums with 15 to 20 tracks. Despite having a few gems, Trouble Maker felt like every other song had half the effort put into it as the preceding track. It’s not that the songs are horrible. In fact, they have incredibly catchy vocal and guitar harmonies mixed in with a lot of raucous screams and chants, but the super crisp production by way of Mr. Brett Gurewitz makes their raw punk sound feel somewhat diluted. I can’t speak for Gurewitz or any of the members of Rancid on behalf of how the production of this album went—I’m simply just speaking about how this album made me feel.

So, what’s good on this album? “Ghost of a Chance” and “An Intimate Close Up of a Street Punk Trouble Maker” (Phew!) are very decent representations. There’s Tim Armstrong’s guitar harmonizing over Lars Frederiksen’s high-speed riffs with the “ooohs” and “aahhhs” in the verses leading very comfortably to the chant-heavy choruses. One of the leading singles, “Telegraph Avenue,” softens it up with an acoustic guitar carrying the verse before blasting into the electrified chorus consisting of “nah nah naaahs.” “Bovver Rock ‘n Roll,” fittingly enough, has a very classic rock edge with headbang-style rhythms and bluesy guitar solos. That’s right, a guitar solo with hammer-ons and everything—in a punk song: Judas!

One thing that’s noticeable is that there are not a lot of ska-sounding songs on this album. In fact, there is only one song that invokes the two-tone skank rhythm—“Where I’m Going.” The mix of ska and punk is a huge asset to Rancid’s sound—while I don’t see them as straight-up ska punk, some of their best songs, like “Hooligans,” “Red Hot Moon” and “Time Bomb” were written as such and added diversity to their albums. While “Where I’m Going” is a good song and probably the most memorable on this album, it feels like it was added because, “Oh, we need a ska song here because every Rancid album needs one.” And that’s basically what this album is—Rancid doing Rancid with little to no variations.

Rancid are a band that, despite having somewhat significant musical drifts (i.e. Life Won’t Wait and 2000’s Rancid), are at a point in their careers where any album they put out, good or bad, is going to get their fans saying, “Yup, same old Rancid.” This can be a blessing and a curse as Rancid have patented a musical style that joins together West Coast hardcore, U.K. street punk, Oi! and two-tone ska, which got them to where they are today. But as the old saying goes, “If it ain’t broke, don’t fix it.” I’m not going to argue that Trouble Maker is not as good as Let’s Go or …And Out Come the Wolves, as I know we are all sick of beating that dead horse, but I will say it is what you’d expect from a Rancid album. Take it for what it is and enjoy what you want on it. –Eric U. Norris