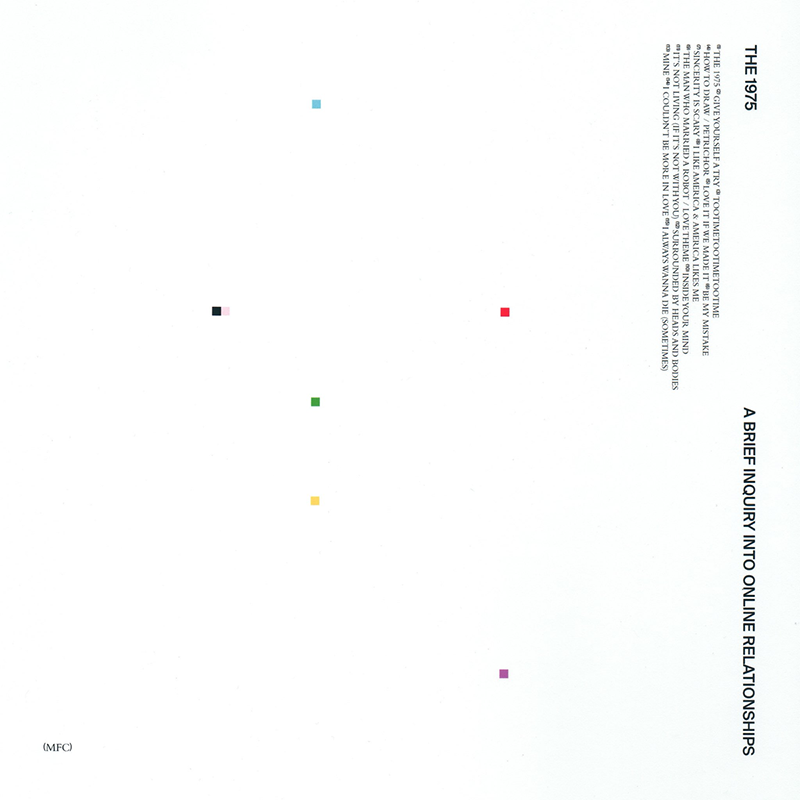 The 1975 | A Brief Inquiry Into Online Relationships | Dirty Hit

Review: The 1975 – A Brief Inquiry Into Online Relationships

The 1975
A Brief Inquiry Into Online Relationships

Manchester pop band The 1975 have made the rounds in the past few years, with their sophomore album having solidified their placement as rebellious influencers on the indie scene. However, they have arguably transcended this persona as of late. Their anthological third album ushers in a daring direction for their musical modus operandi, offering their usual, sonic eclecticism with a recipe of added edginess, zeitgeist-y lyricism, millennial nostalgia, a dash of pop formula and a pinch of unnerving Siri monologue.

Proto-punk debut single “Give Yourself A Try” dropped in June, a strange and sonically disruptive election for a first release from an album. It’s utterly congruent for these smart pop provocateurs, who rarely take the easy out, even as market demand might dictate. The boys bring back an instrumental deep cut from their early years, to be adored by the most entrenched of their fanbase in the (slightly) retitled “How to Draw/Petrichor,” adding the obligatory selection of more ambient tracks the band has been known for from their inception. Second single “Love It If We Made It” is a hyper-modern “we-didn’t-start-the-fire” statement on contemporary hegemony. “Love It” is frontman and frontal lobe Matthew Healy’s finest vocal moment since debut-album single “Robbers,” with the topical, tooth-gritting passion of hope amidst chaos. Thus far, this one is my favorite track of the album, an anthem to the rancor of the past couple years and the audacity of optimism for an ostensibly bleak future.

The multitextural influences on the band since their fledgling era in 2012 remain the undercurrents of their third album, including Guy Debord & French Situationists, Infinite Jest, ’80s pop and the struggle to seek the spiritual in an increasingly secular world. An added theme of obsession and subsequent disenchantment with postmodern binge culture and the relegation of human relations to a billion some-odd screens suffuses the 15-track collection. Track 8,“I Like America & America Likes Me,” seems to indicate that though Healy is often keen to unpack Western culture, he’s simultaneously adoring of it—a tension not unusual for this open-book outre frontman. The dystopian flavor of the album is‚ however, nicely balanced with strains of hope and endurance, an appropriate ode to the addiction struggles of Healy and the commitment of his band sticking by him through recovery and personal renaissance. Per their brand of eclecticism, tracks like “TOOTIMETOOTIMETOOTIME” sprinkle the album with fluffy marshmallows that make the heft of the whole a bit sweeter on the emotional constitution without feeling excessively saccharine.

An ode to the truly fanatic Easter-egg-hungry fanbase, “I Couldn’t Be More in Love” is Healy and company’s pseudo-love theme to their oft ravenous listeners. Eschewing pop traditions of endless romantic songs dedicated to an unnamed other, the band sprinkles A Brief Inquiry with loving notions about concepts, coping strategies and community rather than sexual partners, per se. Track 10, “Inside Your Mind,” is indeed the only one that appears to address a significant other, in a moribund yet oddly adorable fashion wherein Healy acknowledges the overwhelming urge to know a partner’s inner world so intensely that he’d imagine cracking their head open to do so.

The mellow, polyphonic jazz-sax on the track, “Sincerity Is Scary,” dives into the R&B and gospel terrain that the band has deftly wandered through before. Thematically, this track speaks to the heightened consciousness that Healy gained during weeks of intensive therapy in his early recovery. Track 12 “Surrounded by Heads and Bodies,” tells the further narrative of rehabilitation and the precious—and sometimes scarce—real and conceptual relationships forged during that vulnerable time. “It’s Not Living (If It’s not With You)” is a grandiose, lyrically acidic examination on Healy’s opiate addiction with perplexingly poppy sound, the signature mark of the band’s intent to juxtapose levity with depth. The body of the album is heavily weighted toward cogitations on the nature of mental health, addiction and human connection, which are nearing perennial status as themes for The 1975’s narrative.

Fans of the band, like myself, will locate a familiarity in the album, met with a satisfying set of surprises of sound and sentiment. For the curious, uninitiated listener to this band’s brand, A Brief Inquiry may feel a bit heady and difficult to access, especially via the tendency to meander through multiple genres. In its complexity and consciousness, A Brief Inquiry Into Online Relationships is lucidly reflective of a maturation for Healy and his bandmates, and a challenge to their listeners to get a little more “woke” along with them. –Paige Zuckerman