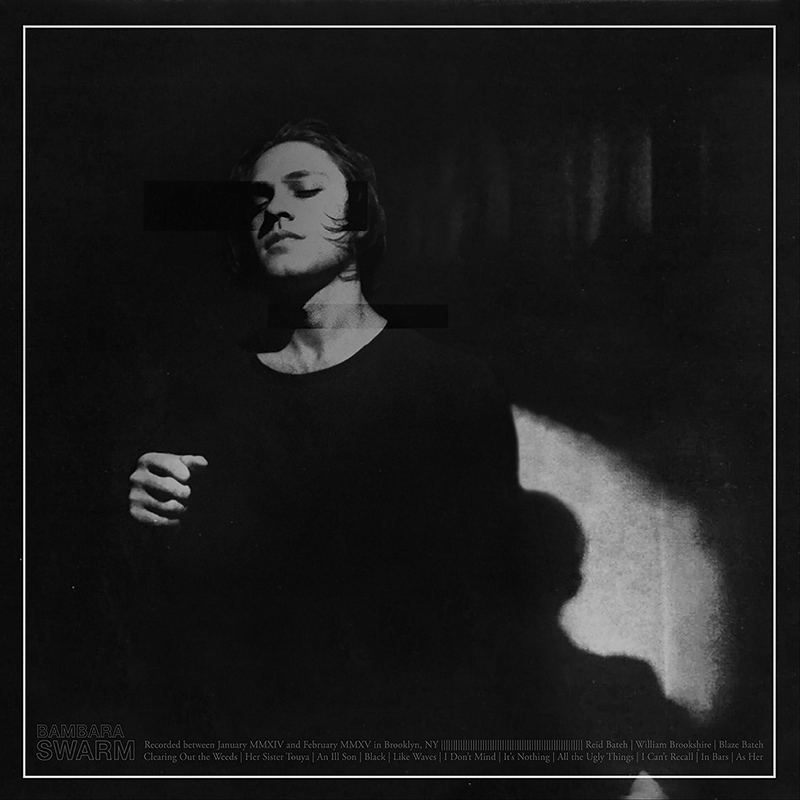 Brooklyn-based trio Bambara’s second full-length, Swarm, pulses with the same harrowing noise punk and raucous discontentment that typified their 2010 release, Dog Ear Days, and 2013’s Dreamviolence, an at-times hellish LP that took its inspiration from the desperation and grime of New York City. In Swarm, Bambara similarly fixate on crafting a haunting and beautiful nightmare, maintaining their standing as purveyors of dark and tangled noise while successfully concocting a cohesive and satisfying whole.

Recorded in a studio by Ben Greenberg (Uniform, The Men), Swarm isn’t so much a point of departure for Bambara—instead, Swarm represents more of a sharp advancement from the three-piece’s previous work, leading the way into a well-manufactured and compelling nightmare. Throughout, Bambara remind of Iceage as they meld traditional noise with blues-esque cowpunk. Immediately in the first track, “Clearing Out The Weeds,” singer/guitarist Reid Bateh’s stratified spits and snarls, laid over Blaze Bateh’s drums and William Brookshire’s bass, draw quick comparisons to Elias Bender Rønnenfelt. The second track, “Her Sister, Touya,” trades out the gritty guitar and dissonant melodies for crashing cymbals, a furrowing bass line and Reid’s blustering vocals, which simultaneously accent the instrumentals while being washed over by them.

Swarm marries the grim and grisly with a captivating fervor, resulting in a hailstorm of vivid and brutal vignettes. In the swaggering and fatalistic “An Ill Son,” Bambara channel the darkness and gloom of The Birthday Party along with Western-influenced guitar riffs and a haunting noir backdrop. Bateh’s disjointed and straggling vocals sidestep from distracted rambles to maniacal growls as he theatrically hisses out imagery that fascinates as much as it disturbs: “The night when I first saw you / Your skull made all of the skin on your face shine / Skin pulled so tight.” In “It’s Nothing,” Bambara’s bleak, post-punk atmosphere is capped by griping vocals and rhythmic blasts before swirling into album highlight “All The Ugly Things,” a catchy and stirring—and even anthemic—track. This is Swarm at its most spirited and breathless, and there’s something surprisingly buoyant and hopeful—and especially encapsulating—of the song: “All the ugly things are lit up so pretty,” Bateh sings, breathless.

The album is muddled, smearing and anguished—note the amp-debilitating “I Can’t Recall” or the screeching “Filled Up With Night”—but it’s undeniably tantalizing, too, and never once does Swarm come unhinged. Instead, Bambara punctuate their album’s noise with eerie moments of stillness—“Like Waves” is a stunningly beautiful meditation that slowly and wordlessly amasses washed-out noise, which hangs in suspension over pulsating layers. “In Bars Or Something Moving” takes the same speechless stillness in a more foreboding and dread-filled direction through tense and cinematic sound effects, bleeding into the final track, “Her Dreaming,” which maintains the shrill, creaking soundscape but brings back, in bursts, Bambara’s snarling vocals and aggressive drums. Like Dreamviolence, Swarm pieces together a pulsing and austere soundscape by capturing and collecting the fragmented pieces of a city and the characters—Bambara included—that exist at its margins. Nightmarish yet alluring, Swarm is a chilling and immensely gratifying release that signals Bambara’s leap forward in the realms of noise and post-punk; and fittingly, the album ends abruptly, but not in a violent way—more like the way you might wake up, disoriented, from a nightmare. –Kathy Zhou