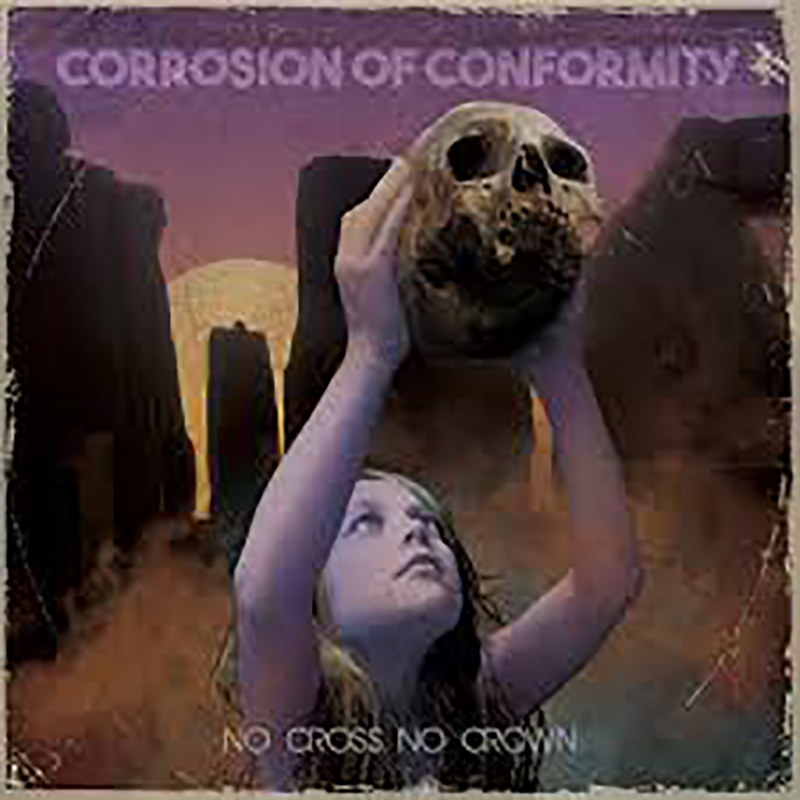 Review: Corrosion of Conformity – No Cross No Crown

Corrosion Of Conformity
No Cross No Crown

Many are familiar with Corrosion of Conformity. They’ve cut their teeth as Richmond’s hardcore heroes in the early ’80s, crossed over to the thrash realm in the latter half of the decade, and finally carved a niche out for themselves as a sludge metal band that wears their Southern roots on their sleeves while keeping their integrity firmly planted in the ethos of hardcore. It proved to be a formidable stronghold for them as, throughout the ’90s, the American South saw an overflow of stoner-sludge greats like Eyehategod, Solient Green, Down and Crowbar. However, COC were not swept under the rug as a hardcore band attempting metal—the addition of rhythm guitarist and eventual vocalist Pepper Keenan enabled the band to hone their craft and with it, pump out a trifecta of brutality: Blind (1991), Deliverance (1994) and Wiseblood (1996).

As much as fans revel in the height of COC’s success in the ’90s, they still can’t deny their arid artistry that followed them into the 2010s after Keenan took leave from the band in 2006, causing a hiatus until 2010. The band returned as a trio with original drummer Reed Mullin. Keenan would eventually return in 2014 after a stint in Down while COC put out their self-titled album in 2012 and IX in 2014, both paling in comparison to the days of Keenan’s driving riffs. Which brings us to 2018—No Cross No Crown is COC’s first album since Reed and Keenan’s return to the group. Obviously, there was a lot of buildup to this album, and for good reason—while the semi-reunion in 2010 was welcomed, it was clear that we weren’t going to get another Deliverance with just a portion of the classic COC lineup. Now, with said lineup in full force, does No Cross No Crown deliver on the hype?

After the intro track “Novus Deus” the album properly begins with “The Luddite,” which shows off Reed’s groove-based drumming, giving a very heavy and swaying feel to the album. “Cast The First Stone” features some tasty blues licks from lead guitarist Woody Weatherman, and “Little Man” goes heavy on the ZZ Top sound. Throughout the album, Keenan shouts most of his lyrics, which is probably a good thing—he still has a demanding presence with his sandpaper growls, but it loses me on tracks like “Forgive Me” and “Nothing Left to Say,” when he has to hit vocal melodies that sound close to a Zakk Wylde parody. While it sucks that his cleans can’t reach that same vertex they once did, I can at least take solace that his growls in songs like “Wolf Named Crow” still hold the same gravitas.

I won’t lie, I have a pretty major gripe with this record—the last half REALLY … DRAGS … ON! I’m not against songs or albums being long, but most of the latter half of the record went in one ear and out the other—which is a shame because I was getting into the music as it was playing but groaned at the fact that there were still five more tracks, each ranging from four to six minutes in length, that had yet to play. First, it feels like the title track is going to wrap things up with its atmospheric and quiet, more subtle approach, but nope! In comes the six-minute monstrosity, “A Quest to Believe (A Call to the Void),” with Weatherman taking the last minute and a half to stress some pretty impeccable soloing as the song and album fades out drawing to a close … but NOPE! The 15th track is a cover of Queen’s “Son and Daughter.” Just end already! The cover isn’t bad, but for an album that’s already pushing an hour, it should have been saved as a B-side to one of their singles.

If you’re a diehard COC fan, you’ll get about what you’d expect—it’s awesome to once again hear Keenan and Weatherman complement each other’s guitar playing, and while Keenan’s voice has noticeably aged, it isn’t unlistenable. And, on top of it all, there is an element of cohesiveness on this album that hasn’t been felt on a COC record in a long time. It may not be as sensational as their older work, but I’ll be damned if this isn’t a step in the right direction. –Eric U. Norris