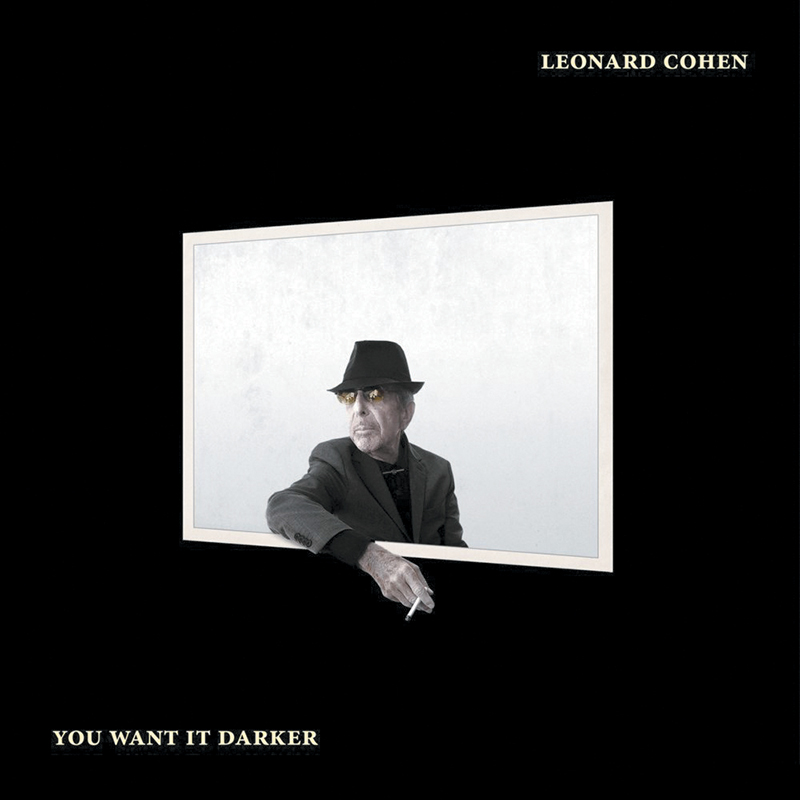 Leonard Cohen
You Want It Darker

Columbia
Street:10.21
Leonard Cohen = The Angel with a Golden Voice

Leonard Cohen’s voice has always elevated to the heights of angels and descended to the depths of the devil, sometimes in the same song. In his life, Cohen understood the themes of love, light and the grace of redemption, but he also understood the quiet, unholy, looming darkness and the beasts that pull you there. Cohen once sang, “Like a bird on a wire / Like a drunk in a midnight choir / I have tried in my way to be free.” On Nov. 7, 2016, Leonard Cohen finally found that freedom—The Baffled King composing “Hallelujah” stepped into the space between the “garbage and the flowers,” and the flame flickered out.

You Want It Darker is Cohen’s 14th studio album. Like David Bowie’s Blackstar, Cohen gives us one more masterpiece before stepping into the great beyond. The album starts out by placing you immediately into the heart of darkness with the title track. Cohen sings, “Magnified and sanctified / Be thy holy name / Vilified and crucified / In the human frame / A million candles burning / For the help that never came / You want it darker / We kill the flame.” Death, darkness and sin thread through every song on this album. These themes have been staples in Cohen’s whole career, and he reminds us of how unavoidable they are. On the track “Treaty,” Cohen tells us, “I heard the snake was baffled by his sin / He shed his scales to find the snake within / But born again is born without a skin / The poison enters into everything.”

Cohen put death and dying at the heart of this record. As always, he would never leave it at just that. Cohen once famously sang, “Ring the bells that still can ring / Forget your perfect offering / There is a crack in everything / That’s how the light gets in.” That light has always been love. And on this album, he leaves that behind, too. On the track “On The Level,” Cohen thinks about staying for one more go-around: “I said I best be moving on / You said we have all day / You smiled at me like I was young / It took my breath away.” Cohen changes his mind—understanding his fate. “Leaving The Table” is the song where Leonard Cohen seems to say his goodbye: “You don’t need a lawyer / I’m not making a claim / You don’t need to surrender / I’m not taking aim / I don’t need a lover / The wretched beast is tame / I don’t need a lover / So blow out the flame.”

Leonard Cohen never shouted out into the void—he whispered, with that ghostly voice that age and experience scratched raw and clean. Leonard Cohen’s You Want It Darker is a great album, but we’ve always expected that of him. What we didn’t expect is that it would be his last. It hurts a little. “Now I bid you farewell / I don’t know when I’ll be back / But you’ll be hearing from me, baby, long after I’m gone / I’ll be speaking to you sweetly from a window in the Tower of Song.” I hope this is true. Goodnight, maestro. Hallelujah. –Russ Holsten