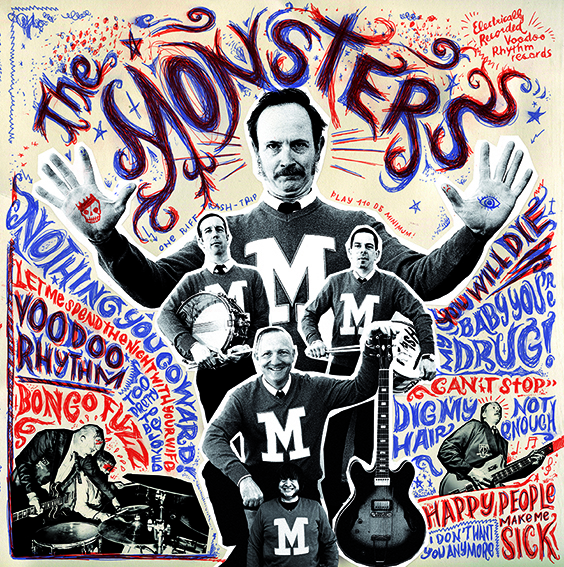 Certainly the raw and rambunctious nature of rock n’ roll is nothing new. Really, all one has to do is be properly attuned to anything with a ravaging style. So naturally, with such keen attention, one would come to The Monsters. Listening to them is very much to be subjected to the sheer brutality or rock n’ roll at its most devastating—save a few other noteworthy acts, such as Guitar Wolf or maybe The Rippers.

The Monsters are the distant cousin, or even perhaps the slightly removed and deranged child that comes from the tales of the black lagoon. Admittedly, the charm that comes from a listening session with The Monsters’ records stems from their simple take on a savage noise. Sure, it may be a bit repetitive, but its energy is wild and dangerous. Think something along The Cramps, but so thoroughly revolting a sound that it germinates within the confines of the garage and remains to fester there.

The album takes influence from the 1931 Fritz Lang film, M. If the exploratory listener is looking for a rock n’ roll noise that stems from originality, this isn’t quite that, but it’s pretty goddamned exciting. The Monsters have a coherent way of thrashing about. It’s something that appears refined and not at all sloppy — rather it’s a precious way of delivering rock n’ roll to shatter the mind, body and soul. This garage punk, which sounds like the rough end of chainsaw to bone, is not for the weak-willed. It’s for those whose demons are far from being at bay and are only too eager to stalk the back alleys in the dead of night. Purchasing M is a risk, and it’s only fair to provide the buyer with some warning or caveat emptor.

This warning aside, the depravity of this record ought to be enjoyed. Unfortunately, bums of this ilk do not often damage the eardrums of eager rockers on this side of the pond. Top tracks for your immediate digestion are the 60s garage-punk-sounding “I Can’t Stop,” the volatile “Not Enough” and the rocker bopper “Bongo Fuzz.” Other tracks worth a mention are the juvenile and snotty “You Make Me Sick” and “You Will Die.” Really, though — the consistency that comes from M is nothing short of remarkable. The Monsters’ sound is totally the vison of shock and awe for the soon-to-be-deaf. It’s nothing short of vicious, and it would be remiss if it were not allowed to dominate your mind.

The Monsters’ M is out through vocalist Reverend Beatman’s Voodoo Rhythm Records. Located in Switzerland, this label has the edge on the interesting areas of subculture. These cats actually take it seriously as an art and lifestyle. It bleeds into their music, and through that, it shows their vitality of soul. While The Monsters represent a primitive yet awesome sound, they should not be in any way underestimated. To do so would be a grave mistake. Be sure to consider M as an album whose energy does the talking. It’s unbridled and passionate—much like what one can expect from Voodoo Rhythm. Now, if you dare, go pick this up. –Nick Kuzmack