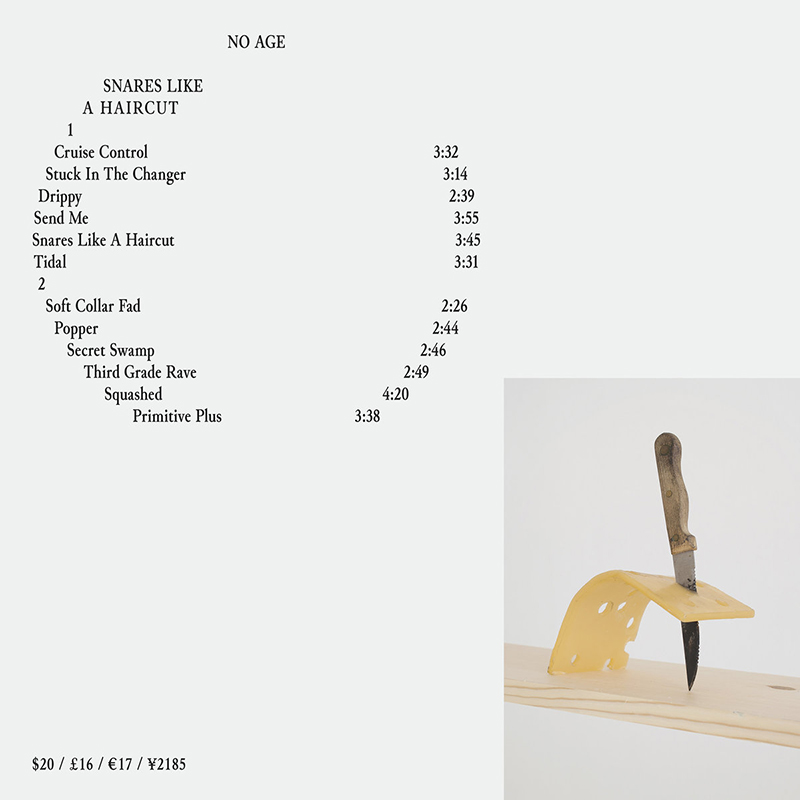 No Age were one of the first bands I got into when I discovered that new post-punk and garage was a thing and started listening to the likes of Ty Segall, Preoccupations (fka Viet Cong), and my evergreen favorite, Gauntlet Hair (where are they now?). I didn’t initially love No Age’s work, even though they had been releasing music for years, and at the time, I blamed it on my innocence and vowed to come back another time for another go. After a few years, I did come back, and I found that it still wasn’t working for me. It seems to me now that this confusion is a product of their love of experimentation, something that pins nothing down and cannot be pinned down. I’m sure the disaffection I felt several years ago toward them would have melted had I chanced to see them live, because though their sound seems to lack a center, if they had an instruction label, it would say, “Please play loud!”

Unfortunately, I still haven’t seen them live, and my wariness remains upon listening through this new 12-track album. Everything in me wants to finally like this band, and though they do so many things I like—and though I admire their determination to experiment—I am still bothered that this is clearly a band with the talent and devotion to dig into a sound and really flesh something out, and yet they just haven’t. The twosome Dean Spunt and Randy Randall come from hardcore band Wives. As No Age, in four full-lengths and many EPs, they have played around a lot with their garage-perfect noisy guitars and long-winded fuzzy ambiance, diving into emo-ish vocals on 2010’s Everything in Between and stabbing into a grungier side of pop-punk-driven melodies. All that’s present is in parts here, a brother to the former albums with the same eyes and hair. Maybe this is what they want: a constant spiral of sound that is just about making noise, not chasing a feeling or a shape. The album artwork features a knife piercing the air as it dives through one of the holes in a slice of swiss cheese. No Age miss the mark; No Age don’t age.

I find myself liking the ambient intermission tracks on this album more than anything else. “Snares Like a Haircut” and “Third Grave Rave” are calming, cool (as in the temperature) and modest. None of the other two- to three-minute tracks, snazzy and noisy or not, grab my attention so much. It’s only for that nagging feeling that this is almost something else that keeps my ears piqued, waiting for them to develop that “almost.” Snares Like a Haircut sounds like something Parquet Courts, current little kings of avant-garde songwriting, would name an album, but it also just sounds like a foggy, distant version of themselves, like a memory or a dream. I want so badly for No Age’s experimentation to harden, to crystallize into something sparkly and distinct. The potential, as I think it always has been, is there. But when they’ve sampled sounds and moods as much as they have, where they’ll go to find a real handhold from here is beyond me. –Erin Moore