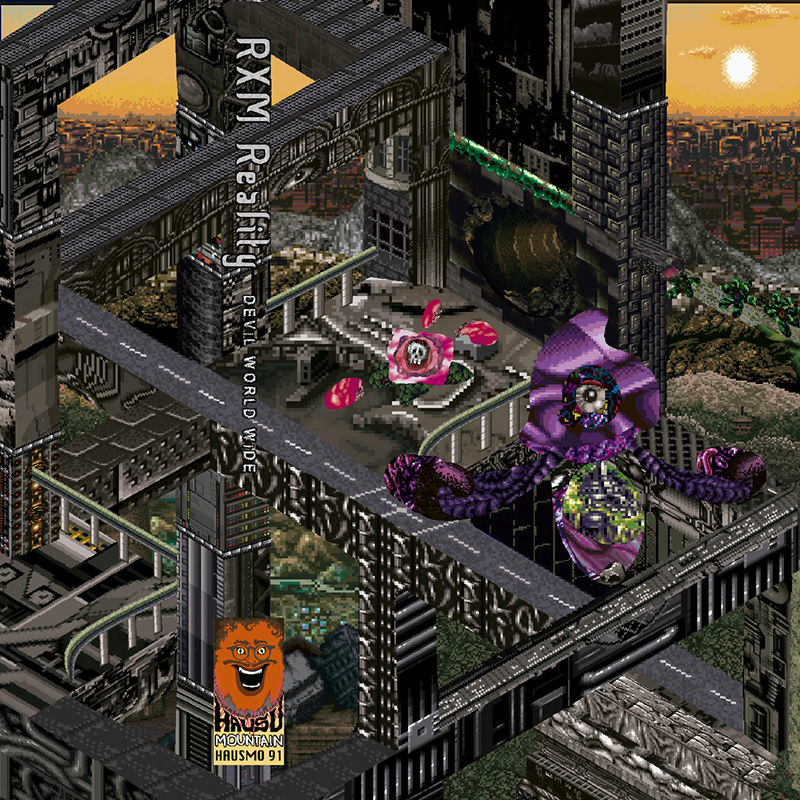 There’s more than one way to glitch. While we’re collectively more than two decades off from the eerie, minimal beginnings brought into the wider public by artists like Autechre, Oval and Fennesz, the sounds of skipping CDs and hard digital cuts are omnipresent in the works of many contemporary experimentalists. Glitch—and glitches, and glitching—dominates Mike Meegan’s latest as RXM Reality so heavily that, more than just an easy genre box to tick, the production trick is essentially his core instrument. It’s as if the stuttering, disorienting sounds of glitch are a medium unto itself, and Meegan has chosen this restriction for himself as a means of boxing in what can often be an overflowing creative vision.

Overall, DEViL WORLD WiDE does feel a little more cohesive and agreeable than Meegan’s last record for Hausu Mountain, Panic Cycle. The noisiness is still present, as is the general unrest of his song structures; everything else, though, is infinitely brighter. The melodies are closer to being tuneful, the harmonic patterns slightly more comprehensible, and elements like the inclusion of warped vocals atop a gleeful synth progression on “I’m a Switch” almost read as pop music filtered through Meegan’s warped lens. There’s a similar feeling on “Hell,” which incorporates an arpeggiated synth line that borders on being a melody. This lingering element of sweetness helps to offset the overall aggression and bleakness of Meegan’s music. It’s noisy and disarming, but there’s a sense that he might want listeners to dance to it, even hum along in certain moments.

Underneath the sheen of Meegan’s sound design is the rhythmic pull of his compositions, which often include the affectations of his synthesizer as a core element. These rhythms are often practically grotesque. Slight inconsistencies in pulse (stretchy rubato, extended pauses, random jumps in tempo) feel like joints lurching in undesired directions, and some of Meegan’s bass tones closely resemble a neglected stomach. On the brief and ironically titled “Chill Lofi Study Beat,” the repeating synth stabs sound especially unwell, offering one of the album’s most consuming, darkly atmospheric moments.

In a similar fashion to many of Meegan’s contemporaries, his solution to the eternal human/machine problem that faces electronic composers is to mirror the messy, unpredictable nature of the computer’s operator. While there is a certain succinctness to the compositional structures—rarely do the tracks push past four minutes, despite containing multiple parts and self-contained interludes—DEViL WORLD WiDE’s micro elements are more prone to unpredictable deviation. Both in the unnerving sound design and in Meegan’s rapid-fire delivery of his ideas, this album reads as a back-and-forth between the lightning-fast processing power of contemporary technology and the inability of dull humans to fully control these devices; between the boundlessness of organic creativity and the frustrating inability of an artist to reprogram their machines to do the impossible.

Even at barely a half hour, DEViL WORLD WiDE can be something of a task to take on. Despite what seems like an attempt on Meegan’s part to soften the experience with generous bits of silence in between tracks and a few briefer interlude cuts, there’s still a sense of needing to pause to come up for air multiple times through a listen. This is a direct consequence of Meegan’s favoring of extremes. Every combination of sounds here is equal parts sickly sweet and upsetting enough to churn your stomach, with the general attitude always pushing at the limits of noise. –Connor Lockie