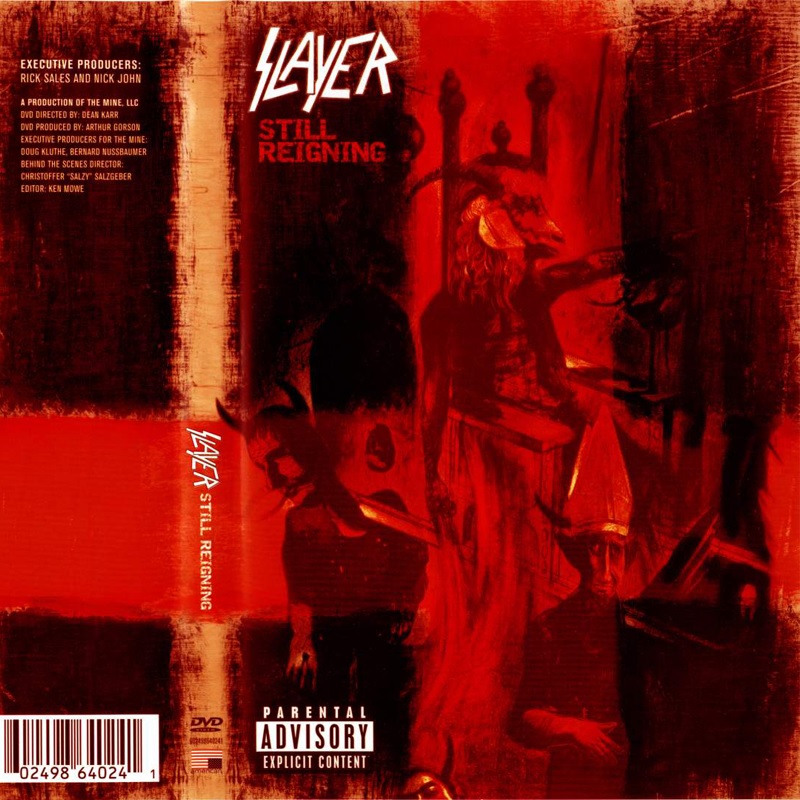 Slayer has been putting out records for 21 years now. In that time they’ve released eight studio albums of original music, including a little gem named Reign In Blood (1986). I’m sure in the last 18 years they’ve tried to put Reign In Blood to bed, but that’s a monster that will never sleep. In an attempt to appease the old Slayer loyalists, the band has released the DVD Still Reigning. The DVD was filmed in Augusta, Maine on July 11th. The entire Reign In Blood album was performed during the second half of their most recent tour, but a little cutting and pasting has the album’s performance front and center as soon as you hit “play”. Other songs from the evening’s performance make the DVD, including: “War Ensemble”, “Hallowed Point”, “Necrophiliac”, “Mandatory Suicide”, “Spill The Blood” and “South Of Heaven”. “Slayer In Their Own Words” is a special feature on the Still Reigning DVD; it’s a compilation of interviews with the band and fans.

If I have one complaint about this release, and I do, it’s the same complaint I have of about every live DVD or video release – too many damn camera angles. There’s someone responsible for directing the cameras that is getting paid. There’s someone else that gets paid to edit all of the camera angles. If they don’t keep camera views changing, zooming in and out, etc, then they don’t have a job. It’s just too much in my opinion, and ruins the continuity of what is happening on the stage. I guess besides earning their keep, the DVD editors realize that the band is getting up there in age and isn’t exactly as active on stage as they once were. I guess the editors feel their snappy camera work and clever editing will make up for it. Tom Araya (bass/vocals) still works the crowd with his hair spinning around like an airplane propeller – the guy looks as though he still has every strand of hair that he was born with. As for the guitarists, well, they’re getting a little portly. I have $5 that says Kerry King would have trouble touching his knees, let alone his toes (and no, I would not say that to his face…). I’ve got to give them credit though, they still sound as good as ever. Kerry King and Jeff Hanneman have always been better song writers than skilled, technical guitar players, but they are truly at the top of their game on this DVD performance. How Kerry gets those fat little sausages he calls fingers moving at the speed he does is a wonder of nature (Again, I’ll keep my comments to myself if ever in Kerry’s presence).

This is a good DVD presentation of Slayer. It’s even better when you consider the price is less than $15.

This review originally appeared in Written In Blood, January 2005, Issue 193.