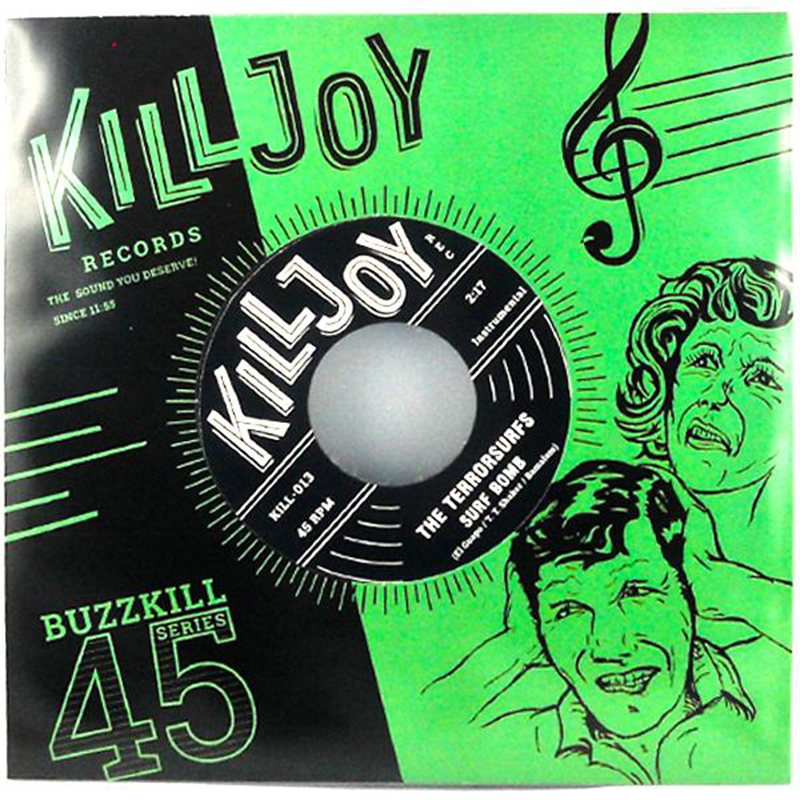 I have a complex appreciation for the raw sounds of surfy garage-punk. By its very nature, it’s music that invokes hostile feelings of rebellion and angst. This is the result of a unique, salt-water style that is made up of primitive guitar riffs that define its rambunctious sound. It’s a familiar style of rebellion best suited for the wilds of the ocean waves. One could say that it all started with The Ventures or Dick Dale or even The Safaris. Years after these pioneers laid down this foundation came the birth of punk. This new philosophy reenergized this style with a dangerous attitude and subsequently, we get bands like Guantanamo Baywatch, The Phantom Surfers, or in this case, The Terrorsurfs.

The terror that comes from the crashing ocean waves and the freedom of a surfboard have easily made surf punk a comfortable style. However, at this point in the game, to pull some sort of unique distinction from the surf punk–meets–garage sound would be akin to stretching the most miniscule particle in an attempt to celebrate a certain aspect of its style with purity. In other words, much like the nostalgic age, each rendition of surf punk is all too familiar. Not that it isn’t good, or even fun, mind you—I just have trouble meriting all of it with promising distinction.

That being said, The Terrorsurfs are worth a listen, and when played live, I’m sure it would make for an absolutely stellar show. It’s a sound so wonderfully savage that it serves to excite and get the knickers wet. The Terrorsurfs continue on with this legacy and do not fail in delivering an energy meant for some sensational fun. The Surf Bomb/Loco Dinorsaurio single is perfect for a budding shredder ready to hit the surf. These two tracks are best suited for a go-go affair or perhaps even a knife fight—that is, if any retro-rockers actually still carry one. This is rebel music through and through. The only thing, though, is that it’s a bit predictable—but if you can jive past that, then you are golden.

The Terrorsurfs' new single can be found thanks to a readily available catalogue from Killjoy Records. If you like what you hear from this, then you are in luck: The Terrorsurfs are releasing a full-length in September. Be sure to check it out and play it for all of your parties. The result should amount to making loads of new friends at your party and, of course, pissing off the neighbors with the tenacity of rebel music—aka rock n’ roll. I could say play at your own risk, but if you’ve read this far, you, the eager listener and hopefully all-around troublemaker, know exactly what you are getting yourself into when dropping the needle on this single. So shape up, play it loud and be inspired to hit the waves or asphalt. Either way, this is music that will be easy to get behind and even easier to inspire carnage on the impeccably boring lives of those living without this kind of noise. –Nick Kuzmack