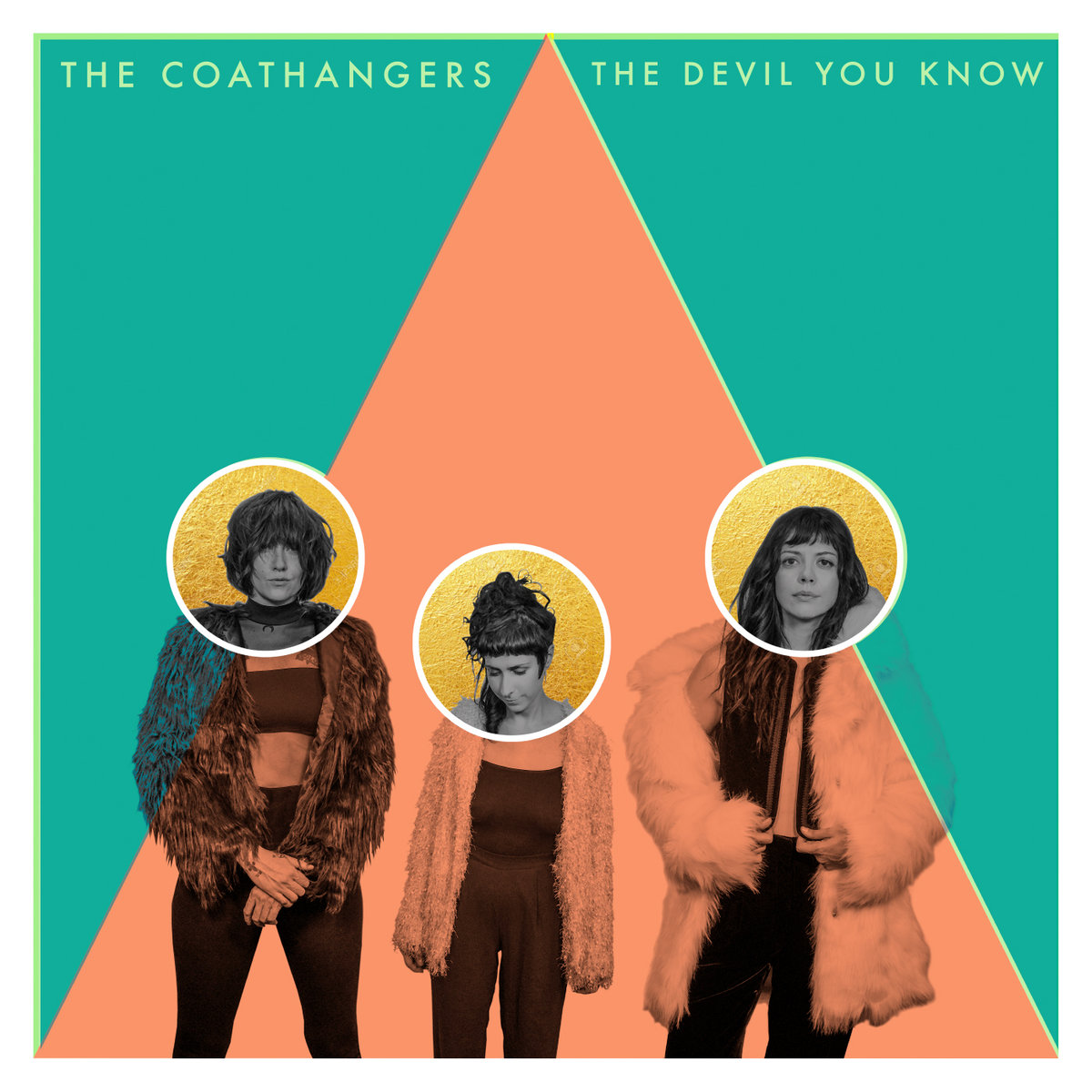 The Coathangers | The Devil You Know |Suicide Squeeze Records

Review: The Coathangers — The Devil You Know

The Coathangers
The Devil You Know

The Coathangers are beloved and embraced by their fans for their frantic and piercing riot grrrl anthems. Coathangers hits are built by beat-driving bass lines, from bassist Meredith Franco (Minnie Coathanger), that swing heavy like an iron pendulum paired with tempestuous vocals and biting lyrics thrown on a platter by guitarist Julia Kugel (Crook Kid Coathanger) and drummer Stephanie Luke (Rusty Coathanger). Albums and songs like Suck My Shirt’s “Adderall,” released in 2014, and Nosebleed Weekend’s “Squeeki Tiki,” released in 2016, shoulder-checked us all, and if there is any way to describe what behavior The Coathangers incite in fans, it’s to be pissed off with smile on your face and a hearty squeal to match.

After a long tease of a wait, fans are able to add another Coathangers album to their collection and once again have more Coathangers lyrics to growl and chant in their car/shower/house party … whatever. On March 8, The Coathangers jump back into the rancorous narrative of modern-day punk rock with the album The Devil You Know. Before pressing “play” on the first song, “Bimbo,” I buckled up, and took a deep, metaphorical cigarette drag ready to rock back and forth to another tried-n-true Coathangers banger I was about to meet.

The two-and-a-half-minute song starts with, dare a say it, a taste of surf rock—I thought I was listening to Habibi (I love Habibi; I just didn’t expect the tremolo effect). Quickly, Rusty Coathanger comes in with her classic vocal “rust” and the guitar switches to a familiar, distorted effect for the chorus. The song ends with the lyrics “The world’s got other plans.” Oh boy, did The Coathangers have other plans for me with that song. Totally thrown off, but still enjoyable.

“5 Farms” comes in second to comfort me with their classic, panic-stricken bass and guitar lines with an anthem-like chorus. I was home with my girls again. “5 Farms” tells a narrative story with the verse lyrics reading, “His father’s dead / With the money in hand / There’s nothing for you / He kept all of his land / Sister over here / She steals your chair.” The chorus follows with a rally cry: “Can’t take it with you / Nobody gets out alive”. This song is like a high, and like all highs—it has a come-down. It ends with a slower and reverb-drenched citation of the first verse to finish us off.

“Crimson Telephone” comes in third and sounds like a slow, tired prowl that snowballs with speed and weight throughout. The song bears classic Coathangers elements but almost feels like a reverse sink into quicksand, as it flexes psych-rock influences mixed in. The following eight songs in this 11-song tracklist continue to have a sense of variety, and having clearly been heavily curated to encapsulate the range The Coathangers are capable of. Initially unwilling to accept the change, it was songs like “Step Back” with Crook Kid Coathanger’s siren-like vocals driving the chorus and “Stranger Danger” with the multi-layered, doomy chorus that coaxed me back into the trio’s trance. There is something about the way Luke and Kugel mumble, “Stranger danger what do you see / Stranger danger looking at me / Yeah you’ve faded and rotten / Yeah you’re something forgotten” that makes me feel like they are licking those words on the side of my face and it is fucking sexy.

Needless to say I am “hooked” on The Coathanger’s The Devil You Know. It got me like a Little Ceasar’s pizza—hot n’ ready for more. I can’t wait to see what this trajectory leads them to in upcoming albums—I’m buckled up! –Bianca Velasquez (March 7, Kilby Court)