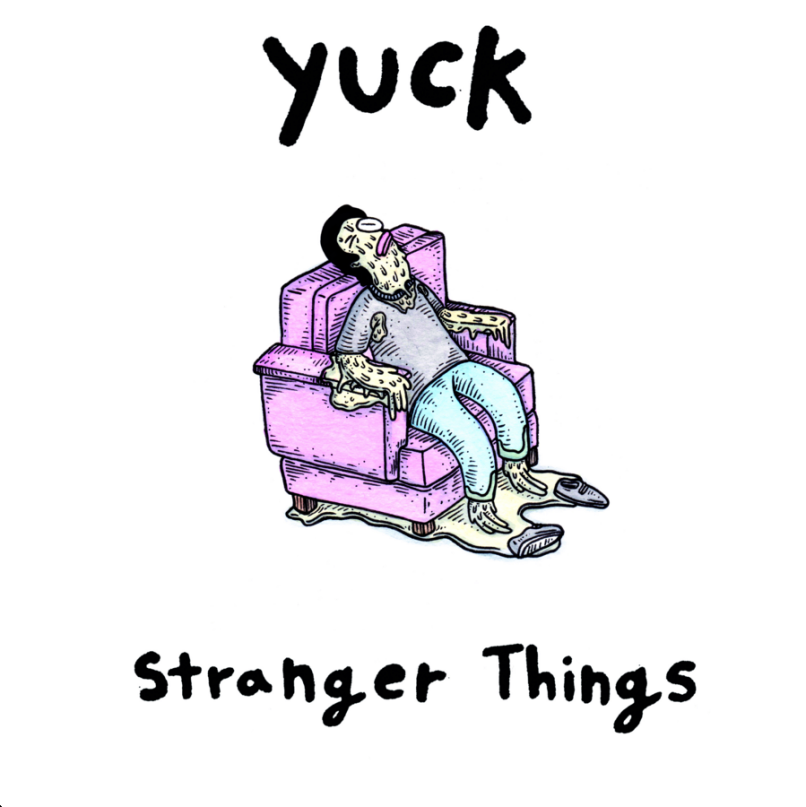 I did not get instantaneous heart eyes the first time I heard this album. Sometimes, your bod isn’t ready for certain sounds, and it takes a gap and a coming-back for you to actually get it. It just kind of fell on ears that weren’t tuned for it. I was ready and expecting some twin to Yuck’s last album, and a few discrepancies upon my first listen to Stranger Things forced me to feel unsure.

I had to forget, for a moment, that I was listening to Yuck to vibe with this album. I didn’t listen to it for a week, and when I returned to it, I came around to it. The issues that made me hesitant were very few, admittedly. The whiny fuzz that usually accompanies their lo-fi, beautifully hooky garage rock is more concentrated in the vocals on this album. Surprisingly, it’s not an awesome fit, and it’s a little abrasive on the ear, even though one would think it would fit right in with the rest of their usual lo-fi mash. It sounds a little artificial, and I think Stranger Things would feel much better if it were a bit less touched-up, with vocals more like those on 2013’s Glow & Behold.

That, and Stranger Things feels like a step in the more pop-oriented direction Yuck were heading on their last album. Poppy tracks like “Like a Moth” and “Stranger Things” are ultimately pretty charming in their sweetness. That’s one thing to note with this album: It does maintain the tangy sweetness in both slower, lighter songs and the harder, grungier ones that have always been present in their music.

Yuck still embody a unique and modern take on indie-garage rock, and I think this album shows change and growth, which is important for a band in that sort of genre to maintain. They are slacker rock that feels begrudgingly affected. Not shoegaze but sidegaze, they’re peripheral glances at a crush across the room, peripheral glances at one’s own embarrassed feelings. They still employ ensnaring hooks, and their lyrics are still weird and relatable. In “Stranger Things,” frontman Max Bloom croon-chants, “I ha-ate myself, I ha-ate myself, I ha-ate myself.” So now, we can all have something to sing along to every time we feel self-deprecating.

“As I Walk Away” is by far my favorite track, with sweet, sweeping guitar that sounds like a Fleetwood Mac song, of all things. The song later bursts, for a second, into a little fuzzy crash to remind us of who we’re listening to. That song is an emotional trip in the way “Shook Down” is on Yuck’s first album and “Somewhere” is on their last one. For me, hardly anything is better than a sad-ish, low-key Yuck song, and this one really is lovely.

Though I wasn’t as stoked about this album as I thought I would be, I came around. I like it because it’s still Yuck: heavy with noisy guitar, loving hooks and easy progressions. There is a motivated freshness present here, and I think that’s what I like most about it because it reassures me that they’re not winding down, that they’ve got a lot up their sleeves. That’s a good feeling to witness in anything, one that inspires and excites. I’m just glad, ultimately, that one of my favorite bands has put something cool and new out. And I have a feeling that seeing them play on April 1 at 8 p.m. at Metro Bar (not an April Fools Day joke, hopefully), might sell me on this newer material a bit more, but either way, joke’s on you if you don’t go to see them, too.