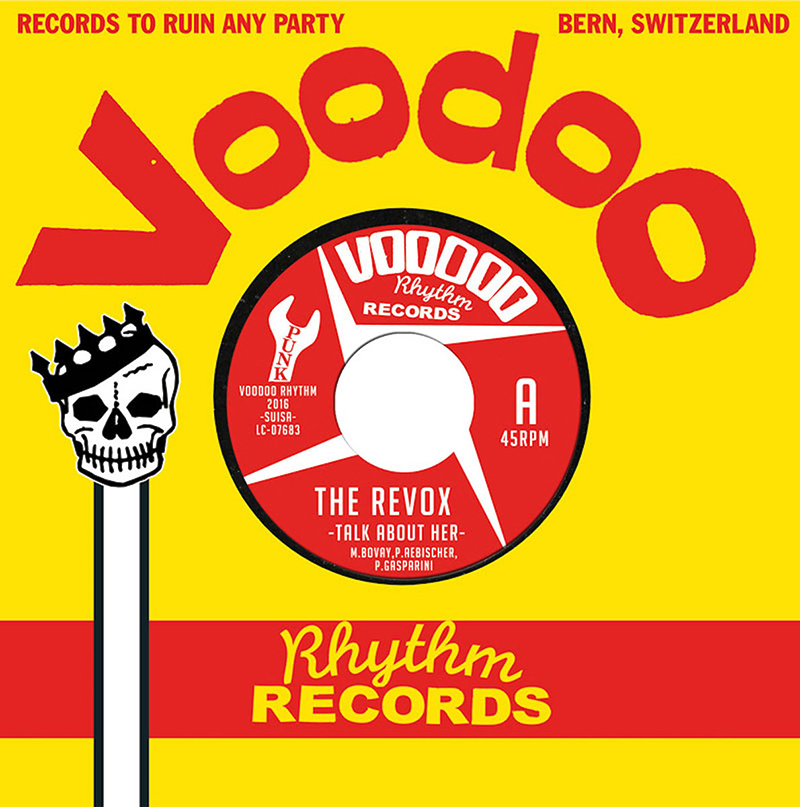 Review: The Revox – Talk About Her / Sick Of You

The Revox
Talk About Her / Sick Of You

Screaming from the frozen utopic wastelands of Switzerland come The Revox. According to Voodoo Rhythm Records legend The Revox were recently resurrected from their ice-cold graves in the Swiss mountains to annihilate planet Earth with fuzz-guitar-driven rock n’ roll. With a sound like theirs, I’d be hard-pressed to believe otherwise.  This band embodies the devastating yet hedonistic power of the untamed nature of garage rock n’ roll. Their sound is unbridled and crushingly raw. Within this release are sounds that bring up a passion for 1960s garage rock but with the shocking energy of punk rock.

The A-side of The Revox’s single is a cover of The Sevens’ “Talk About Her.” The original is an organ-heavy twister. The Revox’s cover shows the logical evolution of a vintage garage rock sound and will have you dropping your knickers in fits of hysteria. They bring forward an already sex-driven tune with snotty vocals and distorted guitars. It’s still got a beat-led rhythm that The Sevens performed with, but this cover has a definitive edge. It’s wild and reckless, but overall, remains tight.

The Revox’s B-side’s “Sick of You” is an original tune—and  I’m sure that by the name alone, you can guess that this is a song of defiance and love-lust-lost. In this garage rock mooder snot and distaste reign. This fuzz-driven relationship killer drives straight to the point by piercing a heart worn out by the false promises of a significant other. I can’t imagine that anyone hasn’t been fed up and demoralized by the fluttery notions of love only to be bitterly disappointed. If your heart is aching, play this loud and go break things that shatter and possibly explode—after all, this is rock n’ roll.

The Revox follow in ready succession behind many garage punkers with similar attitudes toward disaffection. The loud and reckless sound has been done before, and arguably done just as well. The Revox’s single is still something to consider, however. These cats are not sloppy in their delivery. In their own untamed way, they knock out two solid tunes that are well played. This band has done their homework: They know their material and are serious about it. The Revox bring to light a cover of The Sevens’ “Talk About Her” by doing it in their own right and as a sign of appreciation for what has come before.

Furthermore, The Revox show a degree of excellence when bending the rules of rock n’ roll into something primitive and their own. Their style exhibits savage  garage punk at its near finest and shares every deliberate, afflicting and damning spell of rock n’ roll. Like others found in the Voodoo Rhythm Records catalog, this single will inspire a party or, more likely, ruin it. Since it was released in 2016, the damage that this recording has done is likely extensive. So spin this single with a degree of certainty that through these grooves, the ravaging nature of rock n’ roll lives on, and that there are more like this to come. –Nick Kuzmack