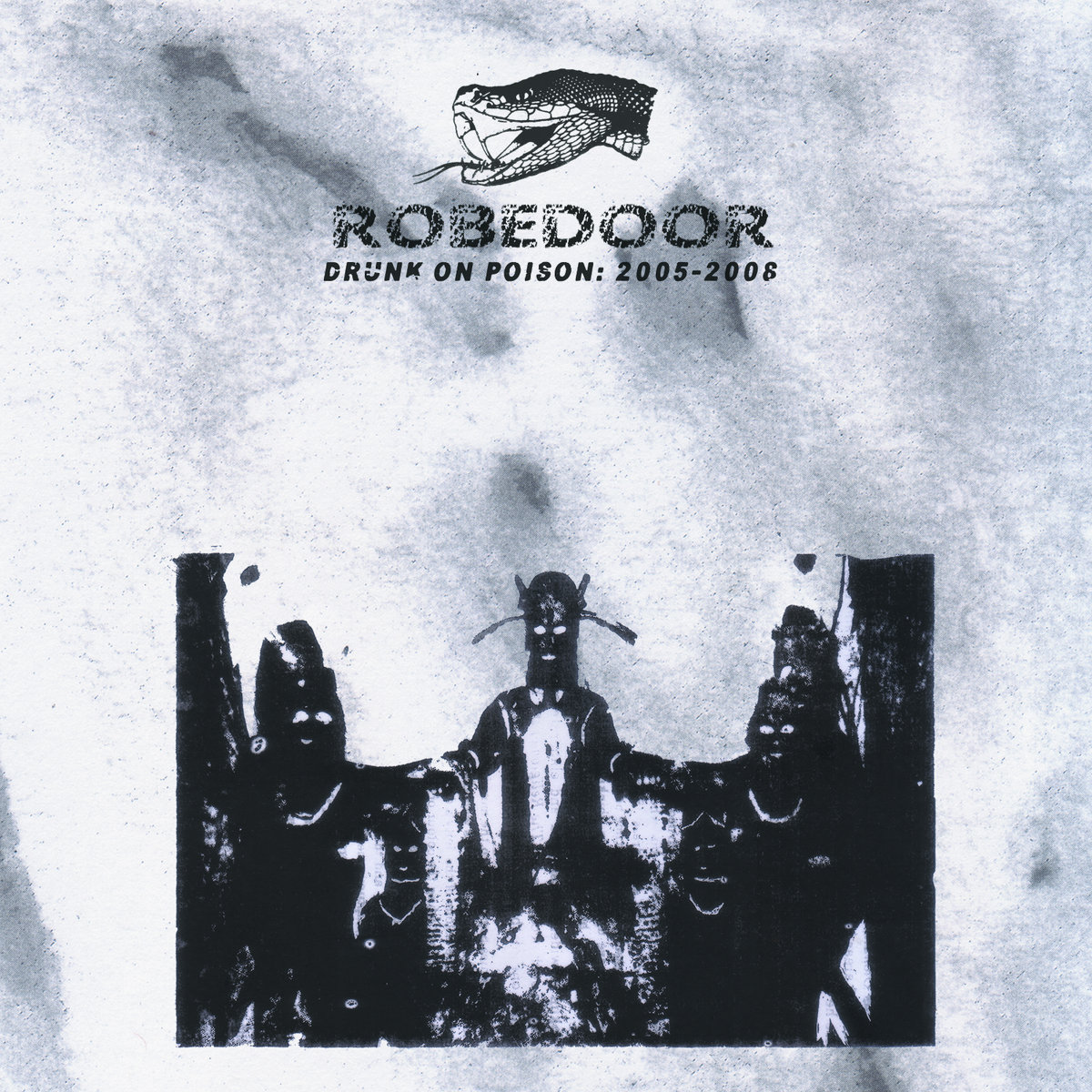 L.A.–based drone-doom-noise duo Robedoor’s first four years of recorded music are a mammoth, sprawling pile of golden debris, dozens of releases scattered across a litany of international independent labels and released through all manners of splits, compilations, cassettes, CDrs and records. From 2005 to 2008, the duo of Alex Brown and Britt Brown (and, for a stint between then and now, a trio with M. Geddes Gengras) hunkered down into a gritty approach to longform composition. Deathbomb Arc’s four-disc box set culls together a sampling of this material and sequences it into a tight tour through the group’s genesis.

Anyone familiar with more than one Robedoor release can testify to the loose—if not entirely nonexistent—sonic lines surrounding the group’s terrain. The last ten years have seen the group toy with melted pysch rock in their trio days (2009’s Raiders) to the industrial hellscapes of songs found on their two most recent and excellent releases, New Age Sewage (2017) and Negative Legacy (2019). Though Drunk on Poison: 2005–2008 is but a snapshot of the still prolific group’s oeuvre, it successfully recites an origin story of Robedoor’s warped musical vision. Here, the duo are fully immersed in the worlds of drone and noise, chiefly concerned with the construction of dissonant towers of lo-fidelity electro-acoustic sound.

Drop into this four-hour hunk of material at any point and you’ll immediately get a sense of some of Robedoor’s career-defining characteristics. The subterranean swathes of noise, the bellowing vocal moans, the swelling, arch-like structures and mantric repetitions pop up in nearly every corner of this set. Contemporaneous criticism looked toward bands such as Sunn O))) and Yellow Swans as points of comparison (two groups who also exhibited with these vague musical traits), but viewing Robedoor’s sound through the privilege of hindsight paints a different portrait. When swallowed whole, Drunk on Poison presents a vision of drone music that, overall, favors in-the-moment arrest over lulling meditation.

While nailing down any firm definers for Robedoor’s sound is inevitably tricky—perhaps even futile—there are a few cuts that seem to embody these loose characteristics and feel prescient in their relation to the duo’s subsequent music. Through both the impeccable sound design and always-shifting terrain of the sparse, dark ambient cut “Reality is a Mausoleum” and the way that “Roving Shaman” crafts a sonic analogue to its title in its swirling loops and ritualistic bell-chimes, for instance, a thread begins to appear. Robedoor approaches these long-form compositions with a quasi-spiritual bent, searching for a religious ecstasy in every note and constantly finding the “next” place.

Outside of these sonic signifiers, Robedoor’s definitive philosophical and conceptual framework is as well omnipresent throughout these discs: the perfect, waxy synthesis of Lovecraftian fantasy, stoner humor and the theology of death, transcendence and destruction, all stored in a damp, moldy underground cave. From the first disc’s opening moments, “Proceed the Weedian” embodies these trademark traits. The track treads along a wave of noise, with a single-note, reedy melody swelling in and out of the mix as the duo stretch toward a grainy, blown-out climax. It’s in turn profound and ridiculous, a serious experiment in patience and the physical chilliness of slow-moving dissonance as well as a melodramatic dirge delivered through a puff of smoke and a stifled giggle.

As is the case with a host of drone, noise and doom music similar to Robedoor, the group can sometimes default to a unidirectional, swelling structure. A host of compositions begin with a single layer at a quiet dynamic, slowly accumulating density and volume before climaxing in their final few minutes and dying back down to quiet (“No Protection” and “Black Wasps” in particular suffer from a forced linearity). In counterpoint, Robedoor find the greatest successes when they escape these peaks-and-troughs trappings and explore stranger, more nuanced combinations of sounds and structures. “Archaeopteryx Sacrifice,” one of the finest tracks here, thrives off of a surreal mix of reedy harmonica drones, dull, heartbeat-like thumping and buoyant low-end noise blasts. When a handful of the material on Drunk on Poison comes at the listener in an oppressive cloud of ultra-compressed noise, the nuanced, alien layers of “Archaeopteryx Sacrifice” ring especially potently.

In keeping with the allure of this box-set’s individualistic outliers, some of the earliest experiments presented here offer glimpses of the beguiling roads not taken on later Robedoor releases. All from 2005, “Gold Scroll,” “Buffalo Skulls” (both from Devourer) and “Torpor as Lord” (Sloths in Thrones) toss up three distinct versions of a Robedoor that could’ve been. Respectively, they deliver an almost grooving lo-fi synth tune, a blistering barrage of harsh noise, and a masterclass in static sound design that hinges on a mélange of blown-out string scrapes, insect-like buzzing and hollow, monastic chanting. Each one sounds unlike much else in the set, a number of pleasant detours skewered throughout the long road.

As wonderful as the sludgy, thoughtful and slow-paced cuts here are, the explosion of “Buffalo Skulls” offers one example of a differing approach that shines on Drunk on Poison: When Alex and Britt strive for the edges of noise and intensity, they excel. The (as far as I can gather) previously unreleased “Pyre Peace” features a collection of heavy drum hits underlying the walls of feedback and static, providing arrhythmic boom-chicks for Robedoor’s ultimate dance macabre. The 15-minute “Acid Collapse” pulls off one of the most deserving and rewarding climaxes here, building across its sluggish pace into a hulking, lumbering beast. Its final minutes come the closest to reaching the rapturous ennui that Robedoor appear to be searching for at the end of each of their journeys.

This quest, a hunt for enlightenment at the end of the road, points toward one of Robedoor’s definitive traits: an obvious affection and respect for classic blues music. Rather than showcasing a strict musical connection (more obviously present in the 2010s trio work), the influence lingers in the peripheries of these early experimental works. Occasionally, you’ll hear the semblance of a V-IV progression or the scorched remnants of a modal melody (the final minutes of “Blackened Branches,” the almost straight-ahead desert-doom of “Plague of Settlers”), but the connection feels more emotional. Though separated by a host of historical sociopolitical factors, Robedoor’s drones share a kinship with the simultaneously cosmic and corporeal focus of the blues, much more so than many poist-1950s renditions that perhaps “sound” similar to the Delta greats.

These eternal spiritual travelogues find a new home in Robedoor’s laments, as in the expressive, psychedelic guitar wails that vocalize across the moment-driven “Lifelong Illusion.” Each bent note cries out in response to Britt’s elongated vocals, giving the track a feeling of two lonely souls finding solace in their shared solitude. Later on the same disc, “Violent Memory” turns toward darker and warmer low-end drones, playing out as a grim funeral march through the wasteland landscapes around the duo’s southern California home. If nothing else, the ability of Robedoor’s abstract, almost entirely instrumental music to speak to these ideas of place, musical history and spiritual preoccupations is testament enough to the evocative nature of Robedoor’s soundscapes.

Although this box set comprises only a fraction of the material Robedoor produced during this period, and saying nothing of the succeeding twelve years (and counting) of albums and other fantastic projects and musical pursuits, Drunk on Poison: 2005–2008 provides a thoughtfully curated access point into Robedoor’s monolith of early material. Much of this material was released in ultra-limited physical runs and was previously scant (or nonexistent) in a digital form. While access to the full Robedoor experience is contingent on the ever-volatile Discogs exchange rate, the folks at Deathbomb have ensured that at least some of this stellar music will survive past the inevitable Alexandrian burning of the digital archive; a series of cryptic runes that, in their inexactitude, point precisely to “the way it was.”