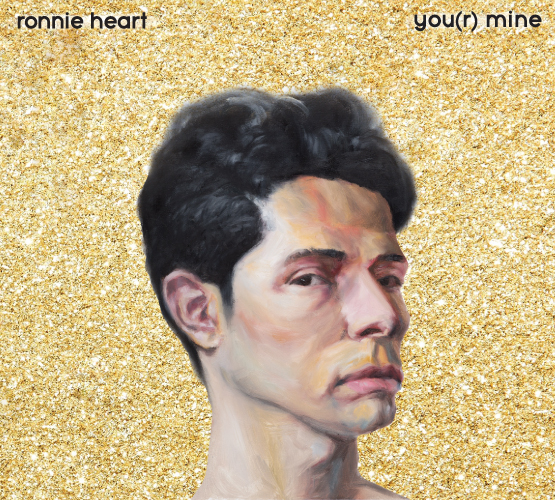 A Latino making funk music sounds a bit unusual and unusual, is exactly what Ronnie Gierhart, aka Ronnie Heart, embodies. Gierhart appears to be an outsider in a world of outsiders—namely, the world of modern funk. His funk leans more toward ’80s cheesiness and less toward sophisticated sounds that seem to belong in outer space. The music on you(r) mine is very much down to earth, and its sole purpose is to make you dance freely wherever and whenever you hear it.

The lack of concept behind this album is another factor that sets Heart apart from anyone else making this type of music.  The album cover comes off a little low-budget in font and design, and if you could see the rest of Heart’s upper body, he’d probably be donning a bolo tie. From his album title to design, there seems to be no real focus on aesthetic.The bit of press I can find on Heart leads me to believe that live performances are where his art really shines, and along that hem, we have an album here that’s possibly meant to promote live shows rather than the other way around.

Heart is certainly an experienced musician, and his track record is the evidence. He’s played guitar for Neon Indian and VEGA, but eventually left Neon Indian sometime around 2011 to make music under his own name. Five years later we have you(r) mine, a debut EP consisting of five songs.

The EP begins with “Tasty Destination,” an electro-disco anthem that brings back electro sounds of the mid-2000s with force. Heart’s vocals are so reminiscent of that time (think Ghostland Observatory) that’s it hard to not feel like the music is a bit untimely. It could be because that era hasn’t had enough time to settle and really appear credible, but either way, this song can make you cringe or relish in the nostalgia of a not-too-distant past. “Smoovie” comes closest to sounding a bit more like standard modern funk. The deep bass synths that bounce along during the verses provide a simple structure and a mellow atmosphere. The chorus is where things become a bit jumbled and the song loses its smooth sensibilities. “Fortune Teller” is a very Prince-esque jam that compares a girl you might be into on the dance floor to a fortuneteller—you know, because she holds your future, at least for that evening, in the palm of her hands. Things get a little strange from here with “Real Bad (Spider Monkeys)” and “Groovitate” closing out the EP.

“(Spider Monkeys)” is a noisy song, with frequent sax solos, that may or may not be about the actual jungle animal. The messy mixing of this song could work well with a pack of spider monkeys looking to let loose in South America. If there’s a correlation between spider monkeys, Heart’s South American heritage and love for funk music, then only he can tell you. Upcoming shows and this album, in digital and physical formats, can be found at ronnieheart.com. If actual modern/future funk is too spacey for you and Prince too sexy for you, then maybe Ronnie Heart will meet you right in the middle to your satisfaction. –Justin Gallegos