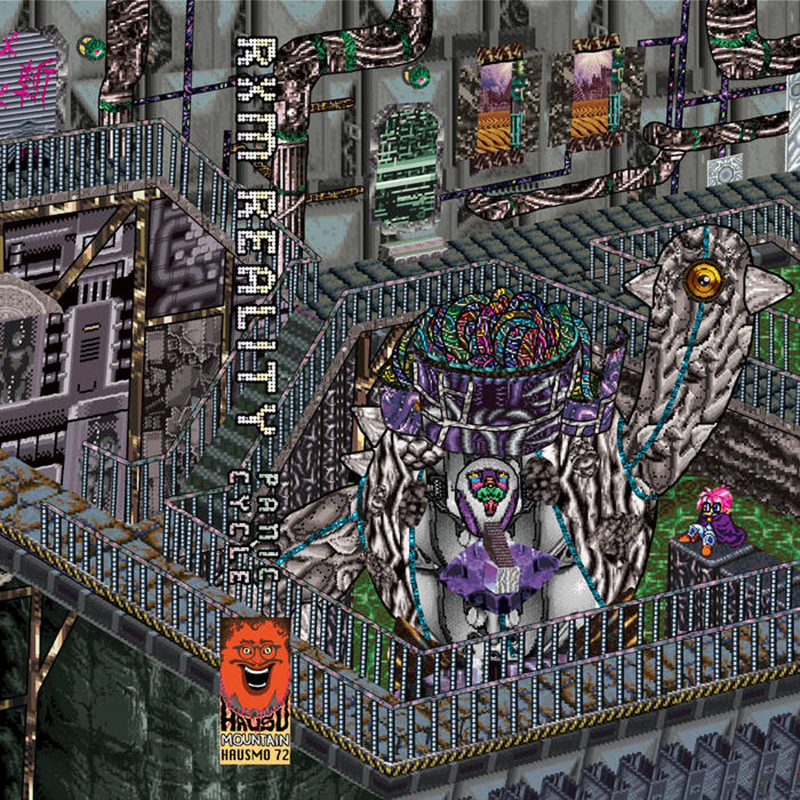 Is there something cyclical about panic? Are all feelings of overwhelming anxiety essentially the same, or do they vary between persons and situations? Somewhat ironically, producer Mike Meegan’s new album under the name RXM Reality complicates its own title. There’s nothing cyclical about the music at all, and often there seems to be a decisively non-repetitive nature to the composition structures. Things move freely between themselves, rubbing conflicting sounds up against each other in a jittering, hesitant fashion. Meegan makes panic-stricken music that, through a wealth of aggression and quick manipulation, aims to fight against some debilitating force of evil, even if that force is itself.

Panic Cycle occupies a special place in experimental electronic that, while overtly pan-stylistic, doesn’t deny its roots in dance music. No track is wholly beat-oriented, but there are plenty of sections that are delightfully body-moving. The title track, though full of oppressive slabs of noise and layers of echoing synths, has an infectious kick loop that’s more enjoyable and approachable than elsewhere on the record. Further, the last few minutes of opener “Long Hallways” has one of the most rewarding sequences on Panic Cycle. The rapid synth patterns and bass harmonic progression push the track to an ecstatic emotional peak that, against the cold and mechanical sections that proceed it, is a welcome addition.

These sections of increased sentimentality, though rare and fleeting, are some of the most memorable on the album. “Head Sculpture” immediately starts with a bright, stuttering synthesizer lead that hits an intangible, emotional sweet spot, but in its final minute, abruptly shifts to a grating, noisy mess of aggression. Any sense of happiness—or even relative peace—is quickly undermined by the overall sense of dread and anxiety that permeate Panic Cycle. This terror reaches its peak on the closer, “Under.” Forgoing all the techno and IDM influences that inform the preceding seven tracks, Meegan delivers five minutes of harsh, freewheeling noise. High-pitched beeping alternates with descending lines of static, ending the record on a massively expressive note.

While there’s always a risk of over-reading the linguistic and sonic connections in evocatively titled electronic music, Panic Cycle’s track titles seem to intentionally mirror its sounds. “I Haven’t Been Invited In” has a particular hesitance about it that keeps the shifting sounds and rhythms from ever coalescing into something identifiable, embodying the paranoid and frenetic nature of the social anxiety the title references. Is there a connection between the driving drum loops and muddy basslines of “My Problem” and the lurking, menacing low-end frequencies of “Your Problem”? There’s no easy way to define meaning here, but immersion in the abstract world and concept of Panic Cycle lends the music a oddly sorrowful, regretful edge.

What ends up selling Panic Cycle is its ability to justify its frequent style changes. Barring some abrupt transitions (mostly during the album’s first half), the compositions are extremely fine-tuned and flow perfectly from one section to the next. Built in interludes, extended introductions and Meegan’s commitment to carry elements across disparate parts helps provide gateways through the chaos. The rigid structures that the music Panic Cycle draws from (the tight phrases of dance music, the endless repetition of ambient and drone) are discarded in favor of abstract, through-composed sequencing. While this makes it hard to pin down exactly what the music might be conveying, perhaps the encompassing confusion, unease and frustration the music provides is exactly what Meegan had in mind. –Connor Lockie