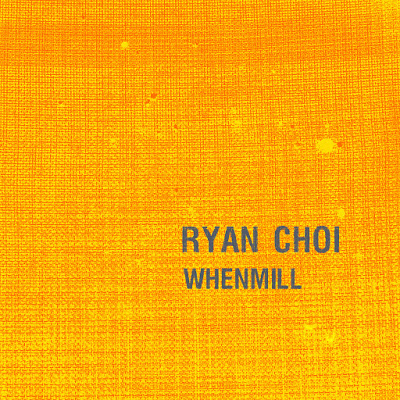 Forever the go-to for earnest white kids committing acts of cultural appropriation and ham-fisted covers both at college parties and YouTube channels, the ukulele has gotten a bad rap. Understandably, with this sort of cultural baggage, the promise of an album composed of solo-baritone ukulele compositions was one that I did not have the highest expectations for. I’ll now follow the typical writing trope and say, “Boy, was I wrong.” As trite as that may be, Ryan Choi’s latest output (along with his Three Dancers EP of prepared ukulele, percussion and electronics) of stately, elegant and at times maddeningly complex compositions proves that we should never blame the tool, but always the builder.

Recorded over the past five years, Whenmill utilizes the baritone ukulele to create dizzying compositions of restrained tension and release paired with improvised runs that use the instrument’s ruddy and suitably limited sound profile to explore classical guitar motifs, skeletal recollections of American folk and flourishes of Spanish classical guitar. These four compositions twist and turn into unpredictable bursts of unrestrained manual dexterity on “South Aleksandr” or brood and roil, peaking dozens of times while in the service of the overall compositional superstructure on “Inn Blue.”

Ryan Choi is a 31-year-old Honolulu resident trained on double bass and baritone ukulele. Choi often augments his tracks with electronic programming and percussion on other releases; however, stripped to the sound of fingers on strings (and some requisite deep breathing after a dramatic swell of chord changes), Whenmill sounds about as close to brain-to-output as we can get. While Choi’s mind works a few mph faster than most with repeated listens—after we get a sense of Choi’s circuitous routes from phrase to phrase—we begin to hear, with mutual excitement, the deviations that pay off, the tiny flourishes that seem just past the limit of perceptible synapse firing.

Outside of the world of modern classical, it is interesting to see where this will land. Certainly, this is not an easy listen. While the ratio of work to payoff is quite high, the blindingly complex and highly dynamic nature of the work—sudden tonal shifts, cluster notes that leap and pop like embers—keep casual listening at bay. At home with really nice speakers or headphones, Whenmill is incredibly engaging; tracking other concentration-competing activities, Whemill can be infuriating. Fans of guitarists who marshalled grit and stamina with studied approaches to overall composition will gravitate toward this when played in the right context. Choi is different, perhaps in affect and overall influence, than popular folk heroes Jack Rose, Robbie Basho, Marissa Anderson and James Blackshaw—although it is a rather large cloth that all are cut from. Rather, I hear elements of William Anderson’s restraint-and-burst, as well as dips into Tashi Dorji–style atonality when notes ring out a bit longer than usual after a particularly vicious attack on the fretboard. I think a good home and audience for what Choi is doing would be on the incredibly forward-thinking experimental label Astral Spirits, who wholly embrace the chance connections and implicit trust of improvised music.

Whenmill is a universal palate cleanser for every out-of-tune “Riptide” or “Can’t Help Falling in Love With You” cover. Please, America, listen to this and smash the ukulele you bought in 2013 accordingly. Thank you. –Ryan Hall