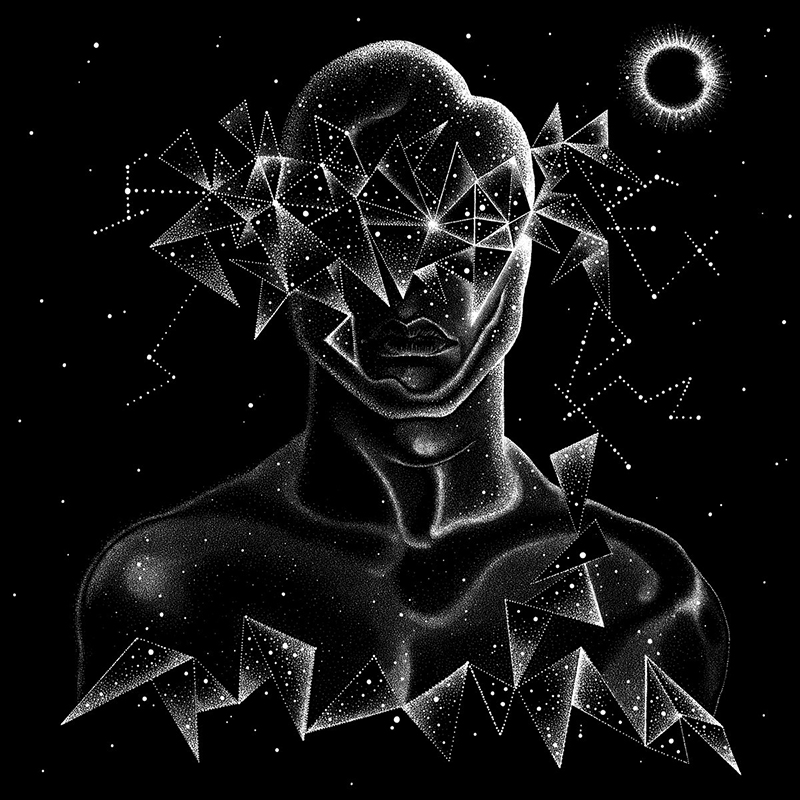 Review: Shabazz Palaces – Quazarz: Born on a Gangster Star/Quazarz vs. The Jealous Machines

Shabazz Palaces
Quazarz: Born on a Gangster Star/Quazarz vs. The Jealous Machines

On their two new albums (released on the same day), Shabazz Palaces frontman Ishmael Butler, aka the Palaceer Lazaro, takes on a new persona, that of Quazarz. Quazarz (not coincidentally the same name given to massive black holes) is an alien come to Earth, and Butler uses this character to analyze contemporary America from a third-party standpoint. Quazarz’s verdict? We’re all fucked. Along with Butler’s instrumental partner Tendai Maraire and producer Erik Blood, Shabazz Palaces take their sound further into eccentricity, coupling it with potent social commentary and a unique concept.

The first of the two albumns, Quazarz: Born on a Gangster Star, is confounding and diverse. Instead of the group’s normal, subterranean hip-hop, most of the focus here is on the instrumentals, which often cross genre lines. “Dèesse Du Sang” is a sluggish, vocoder-driven track that uses just one drum loop to help glue disparaging parts together, while “That’s How City Life Goes” moves from queasy space lullaby to shuffling drums and warped vocals. “Moon Whip Quäz” forgoes all subtlety and instead offers up a dance-tinged celebration of Quazarz’s arrival on Earth. Built off a looping funk riff, the track doesn’t progress so much as it swarms around and explores the limits of one groove.

There are a handful of stellar lyrical moments on Gangster Star, “Shine a Light,” and “Fine Ass Hairdresser” among them, but sound is the primary concern. The seamless production offers some gorgeous and twisted ideas, but the problem is cohesion. The shifts within tracks aren’t always graceful, and sometimes the unconventional structures feel underdeveloped. Gangster Star isn’t a flop, but it feels too random and cluttered to further the Quazarz concept or create a holistic statement.

However, this record is both aided and bettered by the follow-up, Quazarz vs. The Jealous Machines. The group returns to form here, with mind-bending beats laying a foundation for Butler’s hyper-abstract rapping. The range of thoughts and ideas is impressive, with Butler going after the failing rap industry (“30 Clip Extension”), violence (“Welcome to Quazarz”), our overdependence on technology (“The SS Quintessence”) and sensual seduction—“Effeminence” and “Julian’s Dream (ode to a bad)”—to name a few.

Thankfully, his jabs at petty rappers with ghostwriters aren’t empty threats. Over 25 years after Digable Planets’ debut, Butler still sounds youthful and slick, but he’s grown more thoughtful and clever. “Feeling for my phone I was, my growing phantom limb / Orchids in my room, I’m staring at the sun,” he raps on “Gorgeous Sleeper Cell,” deftly navigating the human/nature/technology relationship in two short lines. His confession that “My attention bears the fruits of lust / Into chance I pour my trust / Delicious phases, gorgeous touch / So what, no one dream is enough” feels both sexy and dismal, making his search for companionship feel haunted.

Keeping with past Shabazz Palaces efforts, these albums sound fantastic. The group hones in on heavy lows and drum loops but floods the space in between. The recurring synthesizer leads have an analog crispness to them that futurists (both Afro and non) before Shabazz Palaces have used to transplant their music through time and space. There’s constant reference to both the kraut-laden ambience of druggy spaceships and to the free-funk grooves that see space as a means of escape. Heady concept aside, these two records make for a lush and interesting listen. Shabazz Palaces haven’t outdone themselves as much as they reassert their place as one of the weirdest, most ambitious hip-hop groups around. –Connor Lockie