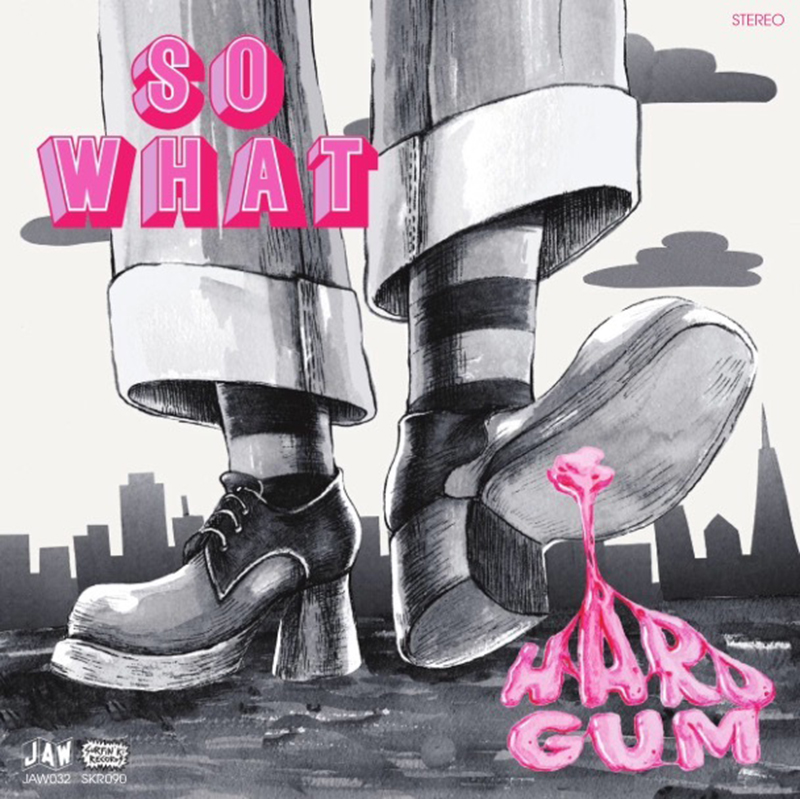 Review: So What – Hard Gum

So What
Hard Gum

So What are the Yanks’ answer to the upcoming trend of revitalized glam or bovver rock — or, as they call it, hard gum. If one is familiar with this revival of working-class glam, then the contemporary Italian bands Giuda or Faz Waltz should ring a bell. They have been leading the march all across Europe for a sound that reminds of the Hammersmith Gorillas or Slade. Recently, this style has been finding fans in the United States. So What, who are Oakland–based, come across as an offshoot of The Equals meets something in the middle of junkshop glam (The Jook) and bubblegum ( 1910 Fruitgum Company). They largely stand on their own on the West coast and are coming up through the ranks as a glam band that boasts an untapped style like that of The Equals. So What’s sound is what, historically, a few might find familiar, as glam never really made it big in the States, with the exception of a few cities like New York or Los Angeles. However, given the untapped nature of glam and its subsequent revival, the majority of so-called hip types will probably find that So What comes with a relatively new sound.

To get caught up to speed, So What have previously released two stellar singles (What You Do To Me and Why Can’t I See You Tonight). The title tracks found on each single can be found on Hard Gum. If you want to skip the 7” plastic in favor for a solid 12” LP, then this is the right buy for you—although missing out on Why Can’t I see You Tonight’s B-side cover of The Equals’ “I Can See You Don’t Know” would be a bit of a shame.

The opening track, “What You Do To Me,” is a real stomper. It’s a song to clap your hands and move to. “Why Can’t I See You Tonight” has a Giuda-esque style to it — kind of in the vein of “Get It Over,” but significantly more mellow. Other tracks worth checking out are “YoYo” and “Don’t Come Back.” Like the other tracks on this album, they are simple and easy to get behind. Overall, the tracks on Hard Gum very much live up to the hard gum mantra as being a harder take on bubblegum rock n’ roll. These are numbers to dance to, but they don’t require any serious thought to appreciate.

Hard Gum is worth checking out. So What fall into a category of top bands that are making some interesting headway. This is real, subcultural-minded stuff that is a made by folks whose passion is more than obvious. Hard Gum ought to be considered a new wave of music that is not overly rehashed or recycled, like some boring trend found commonly in other genres. Rather, it’s fun and stands out as something cool and interesting. Listeners would be hard-pressed to find another like it in these parts. Again, it’s simple, but simplicity is sometimes all you need to just get the blood pumping. Hard Gum can be found via Just Add Water Records, so pick it up and dare to dig something cool. –Nick Kuzmack