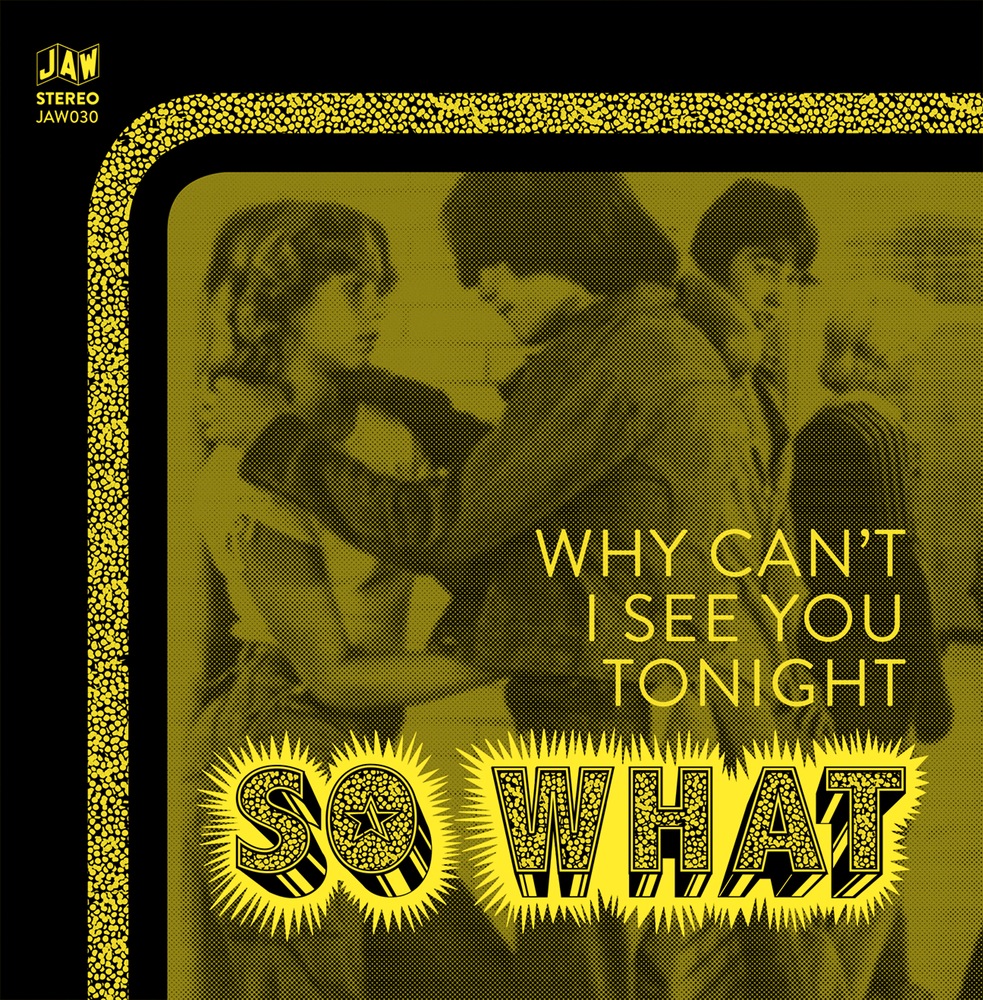 So What
Why Can’t I See You Tonight 7”

It’s been a while since the 2014 debut release of So What’s What Do You Do To Me  single. Now, we’re graced with the “Why Can’t I See You Tonight”  7”. This is perfect for fans of the growing revival of glam rock. These cats are based out of Oakland, California and have a sound that beckons forth the likes The Equals, Giuda or Faz Waltz.  So What style their music off of 1970s Bovver rock, but term their take on it as Hard Gum.  It’s kind of a mix of Oi and Junk Shop Glam that is perfect for soccer hooligans and bootboys alike.  Most important of all, though, it’s fresh and unique.

This mix of the assertive nature of Oi and the glam nature of their rock n’ roll is best heard on the A-side’s “Why Can’t I See You Tonight.” This track opens with a fuzz filled riff that nods toward Gary Glitter or Slade but without the flashy flair. Instead it’s characterized by a cool assertive progression that continuously builds itself up.

The B-side is a superb cover of The Equals’ “I Can’t See But You Don’t Know,” which was recorded by Jesse Hector of the legendary Hammersmith Gorillas.   It’s a perfect number that captures So What’s ability to blast out some solid and defiant Bovver rock. Their version does The Equals proud. It’s hard, heavy, in-your-face and comes complete with an edge.

So What are a part of an ever-growing movement that brings a certain sense of refreshed style and simplicity to rock n’ roll. Importantly, this is Hard Gum, not rooted in the generic punky styles of music that are constantly repeated over and over again. Meaning, this isn’t rehashed Johnny Thunders or The Clash, rather, Hard Gum definitely has it’s roots within the one hit wonders of the 1970’s glam movement. So What and their contemporaries brandish something of their own through a fresh look into a past that is still yet to be fully appreciated. It’s hard to say where these contemporary groups are going to end up, but it’s clear that they stand out with something infectious. The trick will be to see whether or not it catches on. Even if it doesn’t fully, So What and their kin will no doubt have their own host of fans to draw from.

Based on this single, it will be interesting to see what comes next from So What. No doubt it’ll have a sound that is reminiscent of The Equals, a huge influence on the group.  To be fair, it’s not a sound that is readily explored, and So What currently has all the room in that market to experiment.  Whatever it may be, if it continues in the direction that the Why Can’t I See You Tonight and What Do You Do To Me singles, it’ll be good, if not at least entertaining.  However, it is clear, though,that glam rock is back and it looks like it’s going to stay— at least for the foreseeable future. —Nick Kuzmack