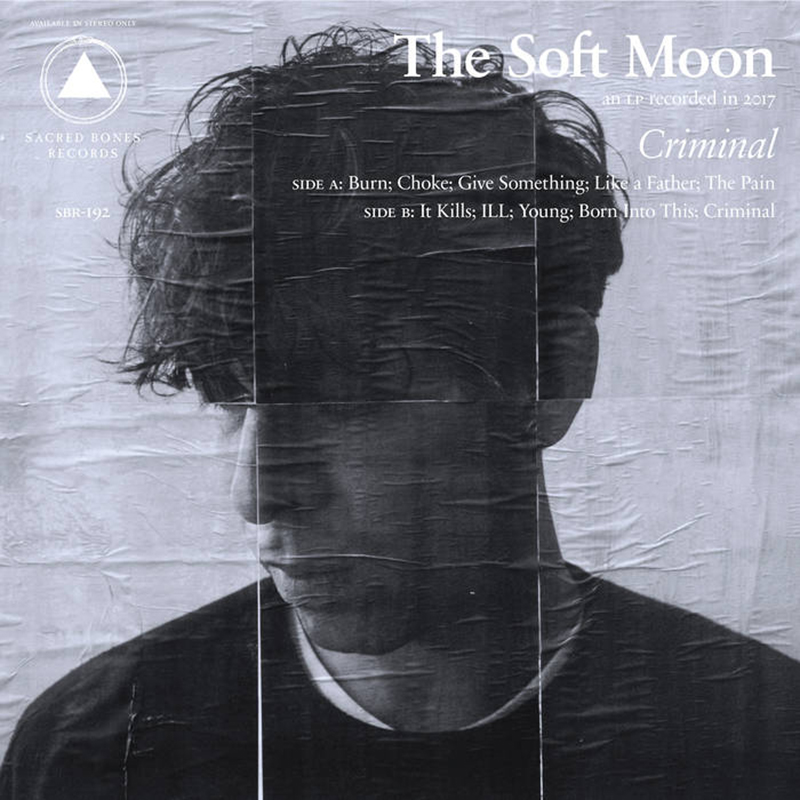 Sacred Bones Records
Street: 02.02
The Soft Moon = All Your Sisters + The KVB

There have been many iterations of post-punk over the years, from the new millennium’s HTRK and Interpol to our present-day gob of artists, like Soft Kill, Cold Cave and Chelsea Wolfe, to name a few. But it’s The Soft Moon, the solo project of Luis Vasquez, that has long been my favorite contemporary post-punk act. Some don’t agree with me, expressing that his work sounds like something that’s been done before, but I see his particular and steadfast sound as a product of his emotions, something sincere and authentic. He’s long stated that the project is a vessel for feelings of inner conflict. His work, while aesthetically rich, houses so much more, as does post-punk as a whole. Post-punk music often stems from real feelings of pain, perturbation, anxiety and unrest. The Soft Moon, always deliciously textural and well-produced, seems to me like a conduit of these feelings so authentically constructed by Vasquez. Perhaps that’s why it sometimes may feel shallow or transparent; Vasquez fits into the genre so well that it seems effortless.

Yet there is effort—and growth. Sacred Bones describes Criminal as Vasquez’s most personal work yet. It certainly stands out as the most aggressive of his albums and the least murky, as the fuzzy layers that made his past songs feel gloomy and experimental become charged with the darkest, angriest energy yet. Each album has had an ebb and flow of high-strung aggression and slow, ominous, sedated anxiety, but Criminal errs more toward the aggressive end and may be the most dark-spirited album he’s released. While there is still a weird, smoldering underside to the more cutting songs, such as “Giving Something,” most go somewhere much deeper and darker.

Criminal is also noticeably more industrial, especially on songs like “Choke” and the single, “Burn.” A stand-out of the record, “Burn” hooks me in much the same way and with the same pacing as tracks from Deeper like “Black” and “Far.” “Burn” is a terrible spiral, dizzy, nauseating and steely with the same industrial elements that prompted Trent Reznor to ask Vasquez to make a remix of one of his songs (from his project How to Destroy Angels) in 2012. The official video for “Burn” is a fuzzy, flash-lit reel of disembodied hands hurriedly cutting cloth to make a Molotov cocktail, with repeating cuts to a shadowy, devilish-looking figure outlined in flames, throwing a bomb and turning, crouched, to face the viewer. This unsettling figure helps to pinpoint the source of the album’s biting urgency.

Criminal, like every album before it, is a tapestry of Vasquez’s pain, where he demonstrates the way it paces, the way it paints. This tumultuous image calls to mind The Picture of Dorian Gray, or of any piece of folklore where a man lost his life or his mind to a deal with the devil, for bowing to his vices. Vasquez often sounds like a man possessed, his lyrics always minimal and desperate. In “It Kills,” his refrain is hungry and pained: “I crave / I need / It kills / I can’t break my heart / I cry so long / It kills / I can’t break my heart.” In “Burn”: “I am the stranger living in my skin / And it burns.” Vasqeuz’s blunt expressions of pain and dark introspection are compelling because, though he may be tortured, he is not fatalistic. He is working through and living with pain, and in Criminal, he again grabs hold of his turmoil and shows us how it burns. –Erin Moore