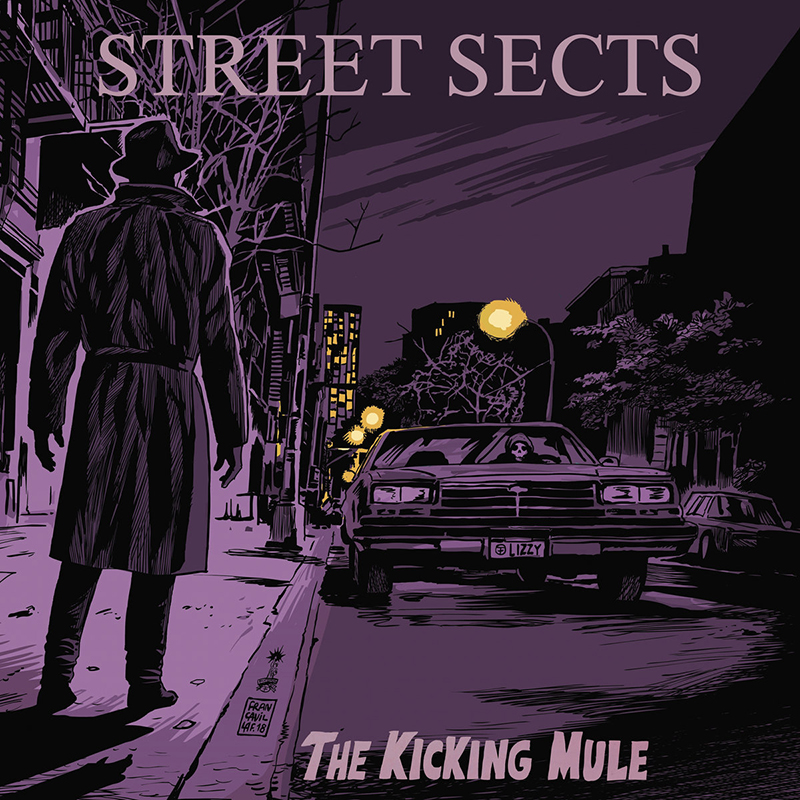 In the opening moments of the Lost Sounds’ song “I Get Nervous,” Jay Reatard screams the titular line, and the song immediately erupts into a vertigo-causing synth line backed by raucous guitars. To my ears, Austin-based experimental duo Street Sects sound like if that singular moment was marinated in a vat of industrial and noise music, thrown deep into a neo-noir comic book and stretched into its own genre. At least, that is the impression I had of them after listening to their debut album, End Position.

Their new album, The Kicking Mule, picks up where the band left off, but since we last heard a full-length from them, they’ve tinkered with their sound, creating a record that takes their foot off the gas ever so slightly, allowing for first time listeners gradually to fall into the terrifying rabbit hole that Street Sects have constructed with their sound.

This album employs more influences from conventional rock genres—the most forward of these influences come from the post-punk world—discernable guitar, bass and drum lines push the momentum forward. I could hear touches of The Chameleons, Suicide and Six Finger Satellite. These post-punky influences help The Kicking Mule feel like a more melodramatic album than its predecessor—that’s not a bad thing, mind you. This album just feels more showy than their last. Also, just as an aside, it makes The Kicking Mule’s purple cover feel more suitable for the band’s current sound than End Positions dull, macabre blues and yellows.

Don’t get too worried about change though, the teeth-kicking industrial electro-punk that made the group’s first album stand out are still apparent—but the anxiety inducing, unpredictable nature of that first album has been turned down to make way for more melody, returning to Street Sects influences. There are more clean vocals on this release than anything they’ve released previously, which makes Leo Ashline’s dark, nihilistic lyrics regarding mental health and addiction easier to pull out. This album is still abrasive and tension filled—songs like  “269 Soulmates” and “Still Between Lovers” live up to the angry tone set by the group’s first album.

There is simply a little more room to breathe on this album, offering listeners just the slightest feeling of comfort and control. While End Position felt like a descent into a noir-soaked, schizophrenic nightmare, The Kicking Mule doesn’t feel any less demented or horrifying, but the additional room to breathe makes the album feel more alive and conscious. This feeling is partially due to the fact that the album is beautifully sequenced, moving from one song to another seamlessly with samples and distortion. The album absolutely feels like it is whole, heightened by the fullness of its structure. While End Position was also a full listen, it was harder to listen to in one sitting—especially on early listens—because of how disorienting the album was.

Fans of the first Street Sects album might be slightly disappointed by the group’s slight shift away from a sound that felt entirely their own, but even as much as I love End Position, I will admit that, at times, the album could feel like not even Street Sects knew where the next turn was. The Kicking Mule feels like an album by a band with a confident grip on their craft.  –Evan Welsh