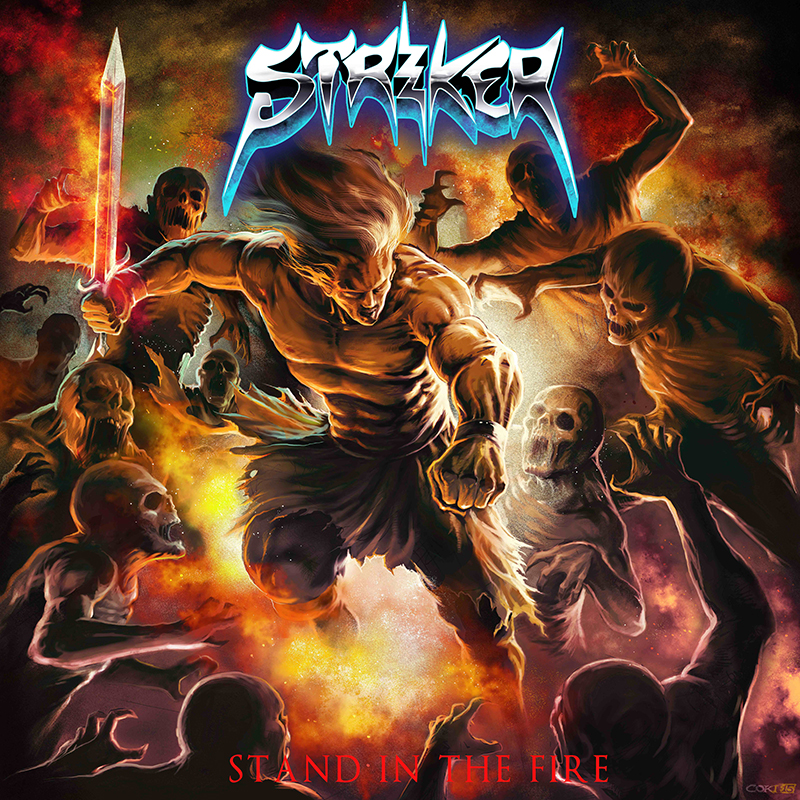 Review: Striker – Stand In The Fire

Striker
Stand in the Fire

Striker have definitely hit their stride on their fourth full-length album, Stand in the Fire. The band struck gold, combining the essence of the classic heavy metal sound of their second album, Armed to the Teeth, with the aggressive, fiery thrash guitars found on their third record, City of Gold.

Stand in the Fire’s second and third tracks are excellent examples of the classic heavy metal sound Striker recreate. They break into big ‘80s choruses reminiscent of Tokyo Blade with simple, strummed-open guitar chords, a massive snare drum—although not entirely replicating the snare from Judas Priest’s Turbo or Saxon’s Destiny—and vocal hooks that instantly seep into my brain. One feat Striker have over Tokyo Blade is a killer saxophone cameo on the second track, “Out for Blood,” intermingling with an awesome fuzzy guitar solo. The last half of the album moves away from the classic ‘80s metal choruses and finishes the album in a more speed metal style.

Stand in the Fire exchanges some of the speed from City of Gold for more varied guitar melodies, while preserving the groove and immense amounts of energy. The guitar solos in the opening track, “Phoenix Lights,” illustrate Timothy Brown and Trent Halliwell’s ability to combine technical skills, such as sweeping, with catchy, memorable runs up the fret board. Striker did maintain some of the aggression found on City of Gold, however. The title track boasts the same machine gun–like riffs, pounding double bass and killer guitar solos, as found in the band’s last album. But it seems as though they discovered a perfect, whole-package formula, including the amazing overlaying vocal melodies that the band’s last album was missing.

Dan Cleary’s vocal melodies are considerably more elaborate on this album, and it seems that slower, more melodic guitar riffs lay the perfect foundation for Cleary to really display his skills as a vocalist. He tastefully adds light, reverbing finesse to the ends of vocal lines and to expand his harmonies in the choruses. Striker preserve their lyrical themes of heavy metal, beer-drinking and unity, reviving their common trope of group chants such as, “I’ll drink to that!” on the tenth track, “Better Times.” They also throw in a track or two about a love surprisingly unrelated to beer.

The sound on Stand in the Fire is perfect for a traditional heavy metal album. The guitar tone is hearty and crisp as the riffs flow, and the solos are as smooth as butter. I appreciate the fact that Cleary avoided slathering auto-tune all over his vocals, if he even used it at all. The bass of the kick drum stays at a reasonable level and leaves room for the bass guitar to be heard. The toms are deep and punchy, and the snare sounds huge. They almost captured a totally organic drum sound, but each kick on the bass drum is unnaturally even.

This is an album I can listen to twice in a row and still be able to find exciting, new, tiny details. Each song differs in tempo and melody, contributing to the easy digesting of the record. This is the perfect album to start off 2016. (Metro Bar 05.15)