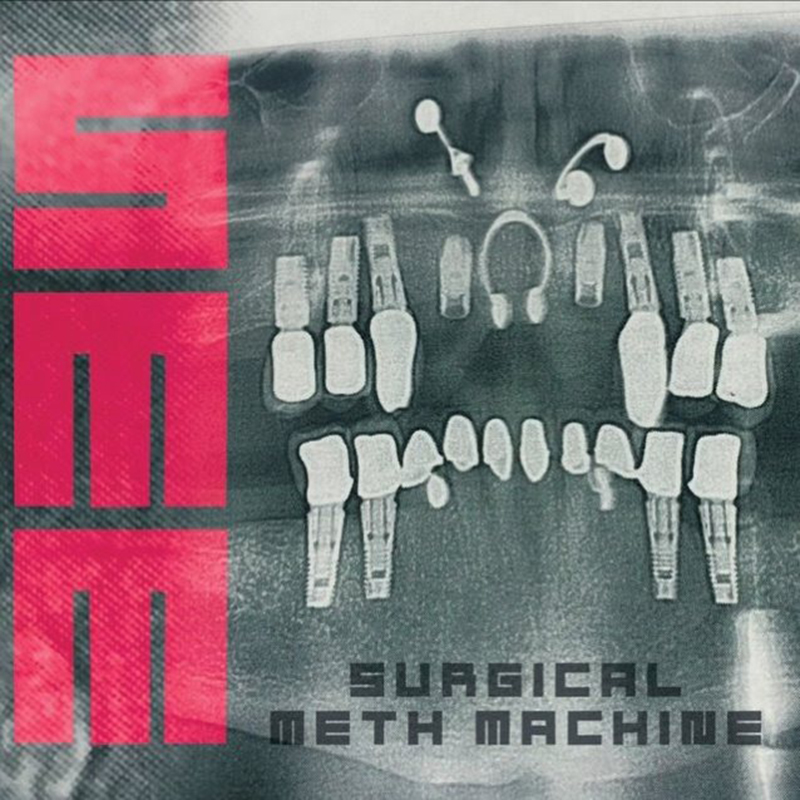 Somehow, at 57 years of age, after revolutionizing (arguably single-handedly) an entire musical genre, making some of the most iconic records in music history, being a guest musician on even more iconic albums (Skinny Puppy, anyone? Those guitars that make “Tin Omen” so fucking rocking are thanks to this man), and relevantly performing “What About Us?” with his band Ministry in a major motion picture release (they’re onstage at the “flesh fair” in A.I.), Al Jourgensen is still at it. And that’s not even taking into account that man’s well-documented, drug-fueled past—his autobiography has more substance abuse and utter/total/complete disregard for one’s own body than the entire cast of Jackass combined. Yet, here he is, and Surgical Meth Machine not only lives up to its name (it messes with your head, makes your heart rate jump and is paranoid in a contagiously hallucinogenic way), but kicks ass while doing so.

This project (at least this debut album) is sarcastic and kind of goofy, as opposed to the politically charged, hopeless anger we’re used to from Ministry albums. It’s more akin to some of Jourgensen’s other projects. It’s cool as hell, though: still mechanical, abrasive, a little faster, yet (somehow) even more warped and unconventional. We’re shown this in the opener, “I’m Sensitive,” where we’re told over sample-drenched, methed-out metal that his solution to negative Facebook comments is to just stop caring (or “giv[ing] a fuck,” as he puts it). “Tragic Alert” is where things start to pick up with chant-along segments and punk/metal guitar riffs and drum beats. I think it’s futile to look too deeply into how much of a statement is being made with these songs, but “Rich People Problems” and “I Don’t Wanna” definitely seem to be snarky commentaries on being a jaded rock star and how celebrities really do bitch about ridiculous shit. The aptly titled “Unlistenable” bashes various bands (Megadeth, Nickelback, Morrissey and even Ministry), and the line between this tweaked-out madness and what we know as reality is blurred even further. At the end of the song, an idiotic voice asks Jourgensen about Devo, and just when you think he’s about to shit on them too, he says “Devo?! They fucking rule!” and we’re given a harsh, awesome cover of the song “Gates of Steel.” The last song, “I’m Invisible,” finishes on a much mellower note—kind of like a shot of whiskey to dull the pain of a comedown. The album experience leaves you satisfied, albeit in a state of confusion.

Surgical Meth Machine isn’t for those who want what they’re used to, even from Jourgensen. This is electronic metal, but it hops around from style to style and tempo to tempo, often in the short span of a song or in a single moment. I tried not to let the fact that I’ve idolized Jourgensen since I was 11 get in the way of how I reviewed this (I’ll risk being hated by him to prove it: I’m sorry Al, that last Ministry album was a steaming pile), but I enjoyed the living hell out of this, and Mr. Jourgensen can still play guitar faster than you, after living a life we couldn’t even dream of enduring. I’ve never done meth, but if I did, I’d definitely put this on while I tin-foiled my windows, and I’ll put it on right now (for the 18th time) anyway. –Alex Coulombe