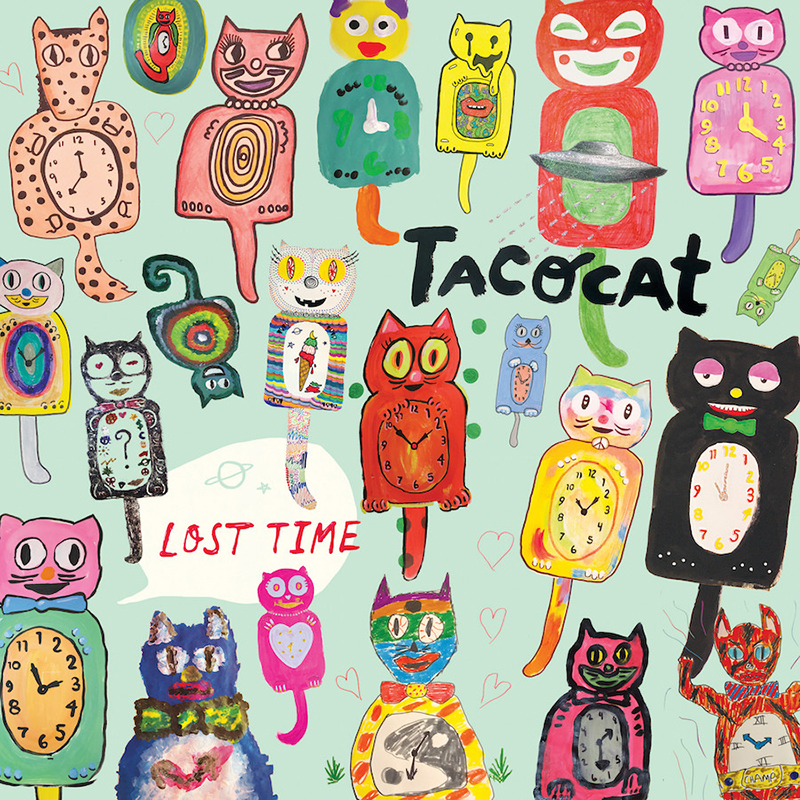 Lost Time has about the same run time as Tacocat’s preceding album, NVM, but seems to go by a lot faster with songs that feel meatier than NVM’s short-of-breath jingles. Each song on Lost Time still expresses some sort of tie-in to feminist/Tumblr/Internet culture, and the band’s subsequent tongue-in-cheek, off-the-cuff humor (see song titles “Dana Katherine Scully,” “Horse Grrls” and “Men Explain Things to Me”). The main difference between their last release and Lost Time is that instead of each song being carried by those surfy melodies that Tacocat have mastered, the melodies seem to be motivated by some stronger energy and musical technicalities that push forth a more in-your-face group of songs. I can’t put my finger on it, but this full-length sounds louder and a little more centered around low, grungy guitar, especially on tracks like “Talk” and “Plan A, Plan B,” a punkish ode to having a sex life. Nothing is more surf-rock than their track “I Love Seattle,” which makes a drum-blasted, shimmying, “oo”-strewn party of predictions about the big tsunami that’s apparently due to crash over Seattle sometime soon.

“Night Swimming,” “FDP” and “Horse Grrls” all utilize shouty, abandonless lyrics that snag your attention like a thorny thicket. “FDP” especially is irresistible with its constant refrain of “FDP, don’t fuck with me!” Along the vein of their other period-themed song, NVM’s “Crimson Wave,” “FDP” means “First Day Period,” which makes sense of the rest of the song. With lyrics like “Not supposed to complain / Not supposed to call it by name / Have to cancel my life / Pain sears into the night,” it’s pretty obvious. For their delightfully brash and casual period talk and that catchy refrain, this is my favorite song on the album. Periods are real shitty, and a real big part of a lot of people’s lives; she isn’t exaggerating when she sings that she’s gotta cancel her life. Periods, along with a lot of other girl experiences, really suck but are shared by a ton of people. It would be way cool if songs about the typical period experience became just as normal as the “I wanna watch TV and drink beer / Being a teen is hard” songs that pepper the music of young kids across generations because having a period is just as angsty and song-worthy as any other teen/20-something struggle.

Tacocat seem to have an understanding that there are a lot of experiences out there that are all pretty normal and therefore relatable. Even their song “Horse Grrls”—a simple, plucky song that stops and goes with short snaps of drum taps and spurts of rollicking guitar—kind of made me blush for thinking those elementary school horse-obsessed girls were weird when I was a kid. Even in a pop-glazed song like “I Hate the Weekend,” they’re talking about how seriously shitty being a service-worker is, and in other songs, how shitty mansplaining is, how shitty being dumped is, how shitty birth control is. Probably the only song that doesn’t jam and foot-tap through life’s difficulties of just being a person is the one about “Dana Katherine Scully.”

Tacocat are doing this rad thing where they bring different life experiences to the forefront through their danceable, ensnaring pop-punk songs that aren’t emotionally exhaustive to listen to, but extremely approachable. There’s nothing better than putting straightforward, catchy lyrics about life’s weirdness and difficulties into music that keeps building into a bigger, more ambitious sound—something this album clearly shows. –Erin Moore