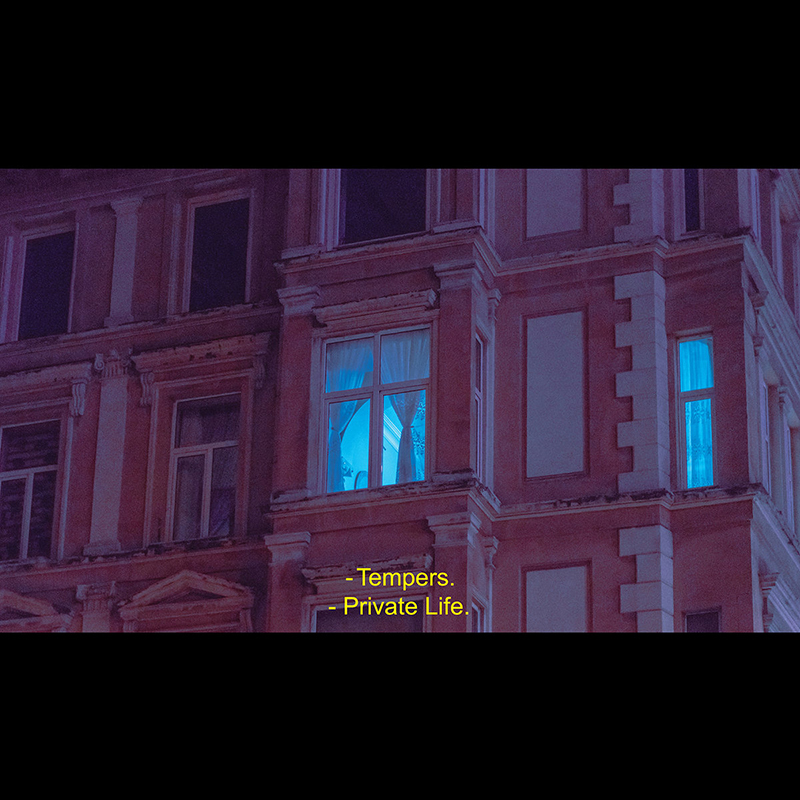 Tempers, based in New York City, formed in 2013. They are a two-piece group consisting of Jasmine Golestaneh and Eddie Cooper. Both their personas and the categorization of their sound poses as goth, dark, electronic and danceable. Golestaneh’s vocals have carried a moody and morbid cadence and tone since their 2015 debut album Services. “Strange Harvest,” the first track on Services, sets the tone for their dark and modern twist on European dance beats. The sound is similar to the doomy and frantic tracks on Psycho Tropical Berlin by La Femme. In contrast to La Femme, Tempers tends to consistently lean more post-punk and goth rather than jump around from haunting ’60s lounge pop to distorted rock the way that La Femme tends to.

Tempers kick off their brand new 10-track album on Dais Records, Private Life, with reverb-coated swells of guitar nailed down by a post punk dance beat on the opening track “Capital Pains.” Tempers eases into this collection of songs with a familiar sound that calls back to their previous albums. The chorus establishes the seemingly heartbreak-induced anthem with Golestaneh crying out “I don’t want it anyway / I don’t even want it anyway now.” The tail end of this chorus is dragged out by the distortion, reverb and echo on her vocals as if she is pulling you in deeper into a cave. The second chorus foils the first, stating: “You don’t want me anyway / You don’t even want me anyway, no.” The track eventually offers closure with the lyrics “There’s a space in the night, where I tear a hole / Hands turn around me, and I go.”

Coming in with more of a goth tone, “Leonard Cohen Afterworld” focus more on creating a foundation through the synth and keyboard embellishments as opposed to the song being driven by guitar, as was the case on the album’s first track. “Peace of Mind” is introduced by a vocal narrative of lost love. Taking a break from the dance party, this song introduces a funkier bass line that thumps slowly as it sways listeners back and forth through the gloomy and almost apathetic vocals—comparable to Greg Gonzalez’s in almost any Cigarettes After Sex song. This comparison is not a drag. It is the emotions induced from the almost performative apathy on the surface of the vocals that leads you to the mourning and sadness that burns underneath. This is my favorite song as it seems to have the most depth … or maybe I’m just projecting!

Taking you back to the ass shaking, the mood picks up with the next track “Filters” and then “Daydreams.” Both bring back the electronic elements and build ups that billow throughout the tracks. “Push/Pull” stuck out to me toward the last half of the album, with the all-telling line “Why do I love someone / Why do I love someone who left.” With this turn of the knife Golestaneh follows with “How do I hurt someone who doesn’t love himself.” What a drag.

The album closes with the appropriately titled track “Exit.” The composition starts with an ominous choir, hinting at (religious?) undertones. For three minutes, the song builds up the intensity of the choir while including leaks of synth and a consistent muted guitar line before dropping off into silence at the 2:46 mark. Listening to Private Life was a pleasant journey through a story of loneliness and despair. I look forward to what comes next from Tempers. –Bianca Velasquez