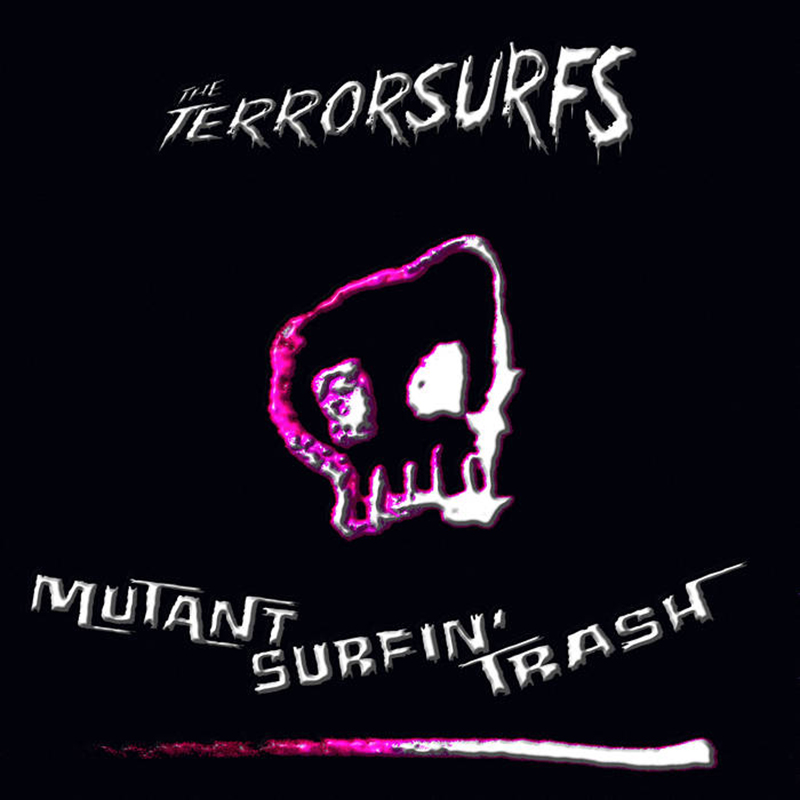 The tenacious surfing garage rockers The Terrorsurfs are back with their new album Mutant Surfin’ Trash. Like their other releases, fans can easily expect some consistency in The Terrorsurfs’ style. It’s the grittiness of The Cramps twisting through the vivid wild sounds of The Trashmen. Think of it as a soundtrack for a Quentin Tarantino film, like a contemporary Kill Bill Vol 1 or Pulp Fiction, but with the desperation of Robert Rodriguez’s Once Upon a Time in Mexico.

After listening to The Terrorsurfs over the last couple of years, I find they never cease to amaze. Surf rock n’ roll clearly lives on. Each progressive release captures a new essence of an ever-expanding, infectious genre. In this new record, there is surf-inspired garage rock that exemplifies rebellion through ferocious instrumentals. Like their contemporaries The Phantom Four, The Terror Surfs rip out works of beauty and psychedelic vibrancy while also being provocative and sharp as a jagged and bloodied surf board’s edge.

Racing at a hot 45 rpm, Mutant Surfin’ Trash boasts 12 tracks of all of the trappings of garage rock barbarism and more. The opening track, “Terrorsurfer,” is a real mover and groover. Containing a strong beat and leading savage and powerful riffs, this track is meant to get listeners jumping about. The second track, “Kosmonauty,” invokes nostalgia for The Ventures’ version of “Wipe Out.” “Raildrag” and “Ghost Ship” have a sound that leans more on the groovy side of the surf.

“Bat Shit Crazy” is just that. It’s got a sound that begs for one to throw themselves around in fits of hysteria. It’s high on energy and style that nods to a Cramps-like primitive nature. Not only that, but this track is also short and sweet.

On the B-Side, “Terrorsurf Apocalypse” carries a dramatic weight. It’s foreboding and delicious with rapidfire drum beats and reverberating riffs. Doomsday has never sounded so good.

Overall, Mutant Surfin’ Trash is quite the dynamic album. The Terrorsurfs have what it takes to go fully unbridled, and here they sonically soar with powerhouse riffs. Despite the highly energetic surf stompers that emerge from this record, it retains a feeling of containment or restraint, perhaps due to a maturity in musicianship and recording. However, I should note that even if this album is a little cleaner, there is notable burst of primeval energy along the edges in each track, as if the full terror from these rock n’ rollers is yet to be truly unleashed.

Mutant Surfin’ Trash is a record that ought to be spun over and over again. In the realms of surf-driven garage rock, The Terrorsurfs are among the best to check out. They are not lost in distortion or swampy riffs. Rather, these cats remain electrifying with each song they play. I urge lovers of all that is still decent  to consider The Terror Surfs as an essential addition to a well-traversed, but always good style of rock n’ roll. –Nick Kuzmack