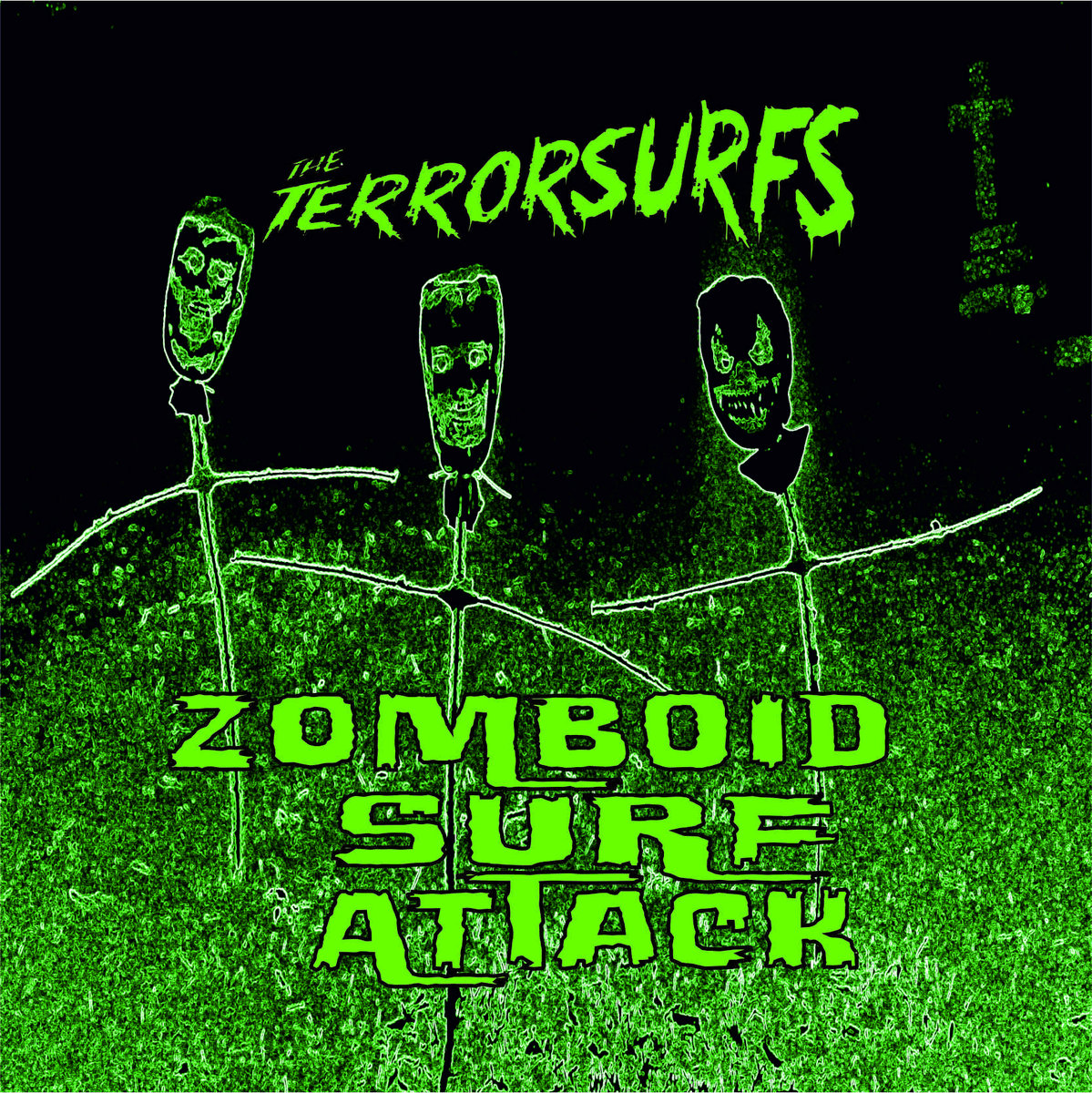 The Terrorsurfs are the bastard offspring of surfs meets mutant rock n’ roll meets Sergio Leone spaghetti westerns, and they are as diabolical as that sounds. Theirs is music of possession, grabbing ahold of the unwary listener’s soul. This record will cast one under its spell.

As expected, The Terrorsurfs are stunning in their subtle instrumental assault on the senses.  This is not much of a surprise, given the sneak peek into their powers of mutant persuasion via their 7” single released last year.  The same kind of ferocity is found on this album, with some interesting additions. First, let’s say that the vibrancy of mutant surf is a constant source of enjoyment, even though it is a sound well explored. Its edgy nature is influenced by the crashing waves and long–standing rebellion only found in the surf. This is a style evolved from the greats like Dick Dale or even The Ventures. It is also something found in noises made by The Phantom Surfers and  the psychobilly outfit Demoni.

The beauty of this kind of music is how it stretches into seemingly distant genres like garage or spaghetti western influenced rock n’ roll.  Not only do the Terrosurfs capture the demonic possession of the ocean waves, but they evoke the vivid imagery of the dry Wild West. Quite a striking contrast, but with tracks like “Dust Off My Boots 1” and “Dust Off My Boots 2,” these cats take mutant rock n’ roll into the realms of orchestral instrumentation.  One could possibly imagine Clint Eastwood’s “Blondie” shooting down Lee Van Cleef’s “Angel Eyes” to these tunes. Particularly with the track “It Came from a Toxic Waste Pipe.”

While the track “Schlock Wave” incorporates a cool swagger, others like “Demon Stink Eye” and “Ape Cape” provide a sense of ravaging urgency. “Loco Dinosaurio” and “The Spy Who Surfed Me” drive home the feelings of a freak out with mutant surf-driven guitar.

The Terrorsurfs are a group that shows promise and an evolving repertoire of rock n’ roll styles. Hardly alone in this genre, The Terrorsurfs do their damnedest to carve out a chunk of it for themselves. This is stuff to groove and jump to. It’s got aspects of calming cool and then wild, unadulterated, surf–riddled garage rock that evokes the lustful appetites of the adolescent mind.

One must beware when subjecting younger more impressionable types to these mayhem-inspiring sounds. The results could result in leather-jacketed, surfboard-riding savages running amok. Then again, that all sounds rather lovely. With this warning in hand, position speaker toward places of youthful gatherings and unleash this psychotically good music. Provided they are not of the square type persuasion, the put-under-your-spell consequences will be dire, but oh so entertaining.

The Terrorsurfs’  Zomboid Surf Attack is out now and demands to be acquired. Get it, drop the needle and dig these tunes. The Terrorsurfs have delivered again, and you, the eager listener, deserve the chance to irreparably damage your hearing. Now dig this devilish dominion as only the terrorizing sounds of this mutant rock n’ roll can deliver. –Nick Kuzmack