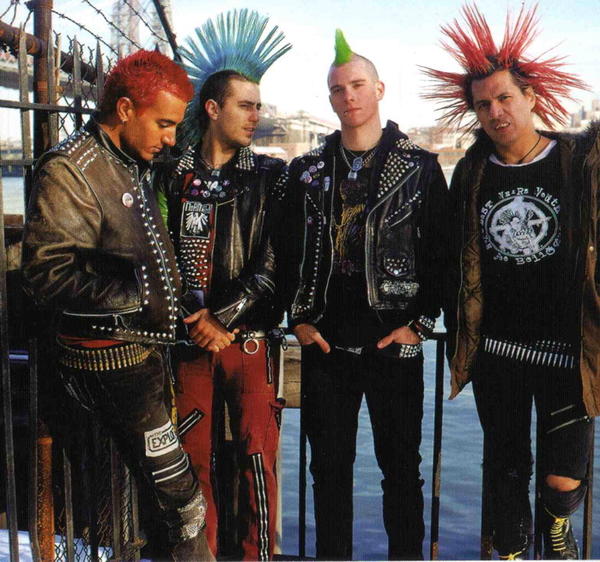 The Casualties (courtesy of myspace.com/thecasualties)

The Casualties
09.19.06
The Avalon
With Skint, Wednesday Night Heroes, The Briefs

I’ve seen The Casualties a lot of times. My guess would be somewhere around half a dozen in the last four years. That’s quite a few times to see a band, and punk fans are notorious for their short attention spans. I mean really, why else would most successful punk bands have songs under three minutes and lyrics that can be memorized after being heard only two or three times?

Usually when I attend a street punk show, I can pretty much predict what will happen. Some kid who still lives with their parents and is wearing $90 bondage pants will ask me for money to get into the show. Then the opening band will be some 15-year-old kids who don’t know how to play their instruments, all of their songs will be about getting wasted (when they’ve probably only drank a few times) and a few songs about how punk isn’t dead. The three bands that follow will all be made up of dudes in stretch jeans rockin’ mohawks or bastard spikes who’s music all sounds ridiculously similar. There will be a handful of slutty looking punk girls there who think they’re tough shit and will be in the pit with the boys. One of these chicks will probably fall down and everyone will get a flash of her vag. Later in the night, a few of these slutty punk rock chicks will end up fighting in the bathroom over something stupid. There will be some underage boys comparing their sweet ghetto tats and making flimsy plans to get wasted after the show. A fight will end up breaking out and the majority of the show will empty out onto the street. Probably only about seven kids will be there to actually fight, while the rest would rather see someone get the shit beaten out of them, because let’s face it, almost any band that’s playing the majority of the kids in SLC have already seen more times than they’d ever need to in a life time. Punk shows: always a great time, even if sometimes the best times have nothing to do with the bands that are playing.

I was pleasantly surprised by Tuesday’s show at the Avalon. The slutty punk girls were still there, there was some yelling in the bathroom, a fight almost broke out and there was some talks about getting wasted, but I’ve kind of come to expect these things when I go to a punk show. It wouldn’t be quite right with out them. Skint started out the night and did so on a great note. I love shows where the local openers don’t suck! Wednesday Night Heroes were next and they also put on an amazing show. The first time I saw these guys, they were playing in The Basement on a tiny stage. The next time they rolled through Salt Lake they played in my friend’s garage. It’s nice to see a talented band like them get the recognition they deserve and especially to watch kids get excited about their music. The Briefs were up next and these guys never fail to impress me. They played a lot of tunes off of their older albums and had more energy than a speed freak. I don’t think I will ever tire of these boys, their white sunglasses and humorous songs.

The Casualties played last and any time these punk veterans take the stage the crowd ignites like a match thrown on a gasoline-soaked forest. It’s pretty amazing. They walked on stage and by the time they were three seconds into their first song, the room had turned into a massive circle pit. It’s fucking awesome the turnout that their shows get and especially how excited kids get when they play. I just wish the turnout was that good for all the other shows that roll through town. The Casualties got a bigger turn out than The Adolescents or The Subhumans! That’s a little crazy if you ask me. Regardless, this was the best Casualties show that I’ve ever seen. They sounded tighter than they ever have before and played a good mix of old and new songs. The highlights of their performance for me were “Punk Rock Love” and “Made in NYC.” Others included Jorge giving a shout out the Latino community and making friends with a fellow immigrant from Mexico that and Nick Anderson of Dubbed getting on stage and yelling that punk was dead and all the fuckers in the crowd were next. A bunch of people booed him and flipped him off. If Jake Casualty hadn’t told the crowd not to try and fight him after he jumped back into the crowd because he was just fucking around, there just may have been a riot that night.