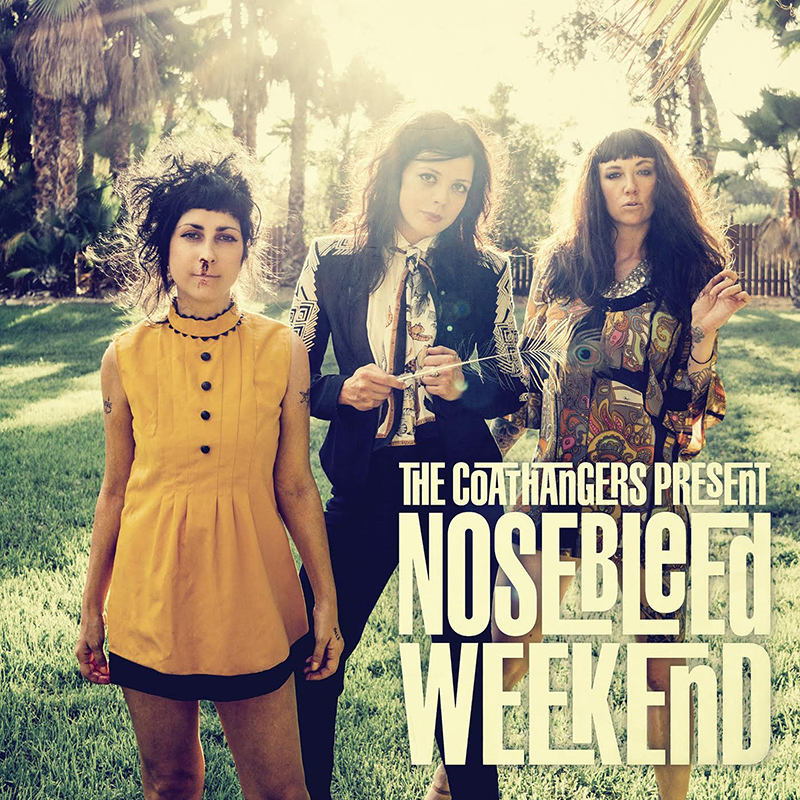 At last, The Coathangers have released the album with which I can faithfully annoy my neighbors at an astonishingly high volume. I initially came across this group via the release of Suck My Shirt and a couple solid live shows. Needless to say, after my thorough exposure, I was sold. After hearing that another album was in the works, I waited patiently for The Coathangers to put out this superb release. Nosebleed Weekend was produced in Valentine Recording Studios in North Hollywood, California. The studio had been closed since 1979, but recently reopened. There, The Coathangers worked with producer Nic Jodin and released their fifth studio album with Suicide Squeeze. To my excitement, Nosebleed Weekend picks up where Suck My Shirt left  off, making for a logical progression between the two albums. It has a rock n’ roll sound that one could pull from the Girls in the Garage comps of the ’60s, but adds a contemporary flair that derives from the no-bullshit attitude of the groups that defined the riot grrrl movement. More importantly, though, The Coathangers maintain their infamous, whiskey-soaked vocals and dirty, garage-meets–post-punk sound while emphasizing Nosebleed Weekend’s move to a more mature groove.

After switching the album on, I am pleased to say there is no filler on Nosebleed Weekend. Each track has its own individual merit and brilliantly plays off of other songs as the record progresses. To kick things off, the first track, “Perfume,” pumps a cool backbeat that is mixed with calming vocals. In contrast, the second track, “Dumb Baby,” is jumpy and fun, much like what one would be familiar with from Suck My Shirt. “Sqeeki Tiki” is easily the oddest number on there—but it’s still pretty good.  It has the snarky qualities that one can expect and love from The Coathangers, but the random squeaky sound in the background throws me off. In a weird way, though, it is kind of charmingly cute, if not slightly aggressive, in a get-your-attention kind of noise. Other top numbers for the listener’s immediate consideration are the lead single, “Make It Right,” the title track, “Had Enough,” and my personal favorite, “Down Down.” I found that this last track has a sound perfect for my long walks and times of needed decompression, which require deep contemplation of the complicated and absurd. Though “Down Down” has this sort of calming effect, there is a brief disruption of the tranquility with a break into rough riffs. But, to be fair, I’m used to the breakdowns that The Coathangers play in their music. It’s one of their notable qualities that allows someone like me to space out and then suddenly be brought back to reality.

I picked these few tracks out, but let me assure you, once again, that this album is solid from start to finish. It’s something that one can play and only risk offending the uninspired or culturally tonedeaf. All in all, Nosebleed Weekend is the must-have record of 2016. It boasts the sound the fans have come to know and love while offering something refreshing and solid for new and old ears alike. Not adding this to your collection would suggest that you are running dangerously close to the edge of obvious musical deprivation. –Nick Kuzmack