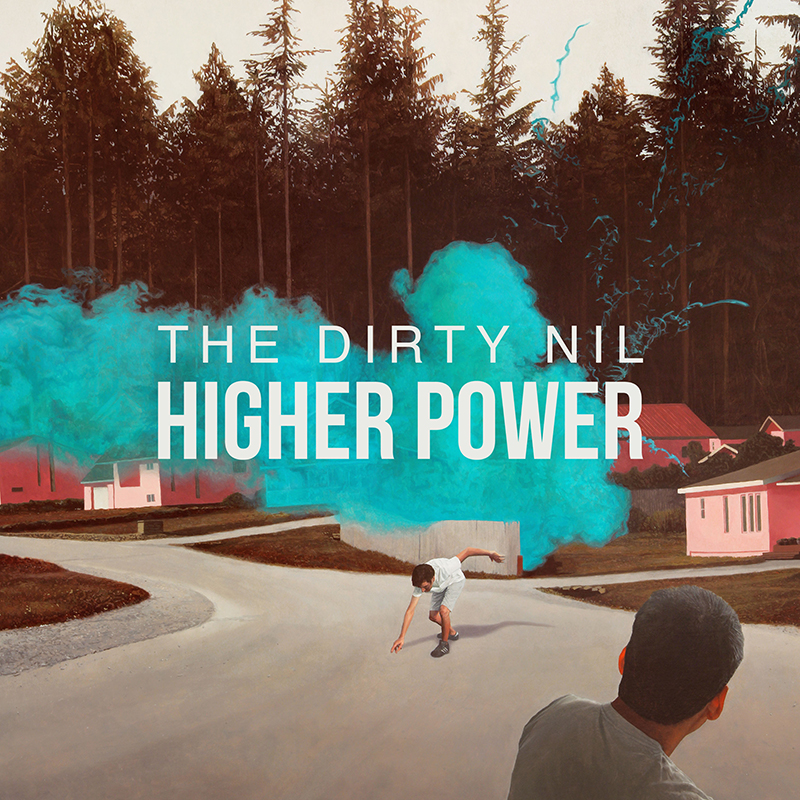 I think I figured out the dominant form of punk rock in the 2010’s – there seems to be a surge of bands that have combined the garage rock aesthetic of unpolished sounds riddled with distortion and amplifier feedback with the new age, indie weirdness that hipsters gush over. Enter The Dirty Nil, a three piece from Ontario, Canada who are the embodiment of this garage-tinged weirdness. Their debut album Higher Power contains an uncanny combination of disgruntled noise and hummable melodies – the guitar will be pounding with the immense weight of the onslaught of power chords, and will be switched out with equally sizable harmonies. The same can be said for the vocals – Luke Bentham has mastered the ability of maintaining a talented singing voice yet manages to not blow it out when he has to switch to raucous shouting of the archetypal punk vocalist.

As I have mentioned, the opposing sounds on this album make it a standout with every song different than the next. The first track, “No Weaknesses” opens, fittingly enough, with 13 seconds of static feedback before the eminent power chords kick in, followed by some pretty articulate drumming from Kyle Fisher, and Bentham’s style of vocals that go back and forth between shouting and singing halfway through each line in the sing’s verses. “Zombie Eyed” gives way more to the melody of Bentham’s vocals while Dave Nardi backs the verse with his bass with the guitar more/less taking a back seat until the chorus hits, and still isn’t void of amplifier feedback. “Wrestle Yü To Husker Dü” is a slower grungier track that teeters into a heartbreak-addled lyrical theme with an easy-to-follow chorus–”I don’t care about your man!” “Lowlives” stands on its own as one of the heaviest songs on this album–it evokes a metal sound with Nardi’s bass lines sounding awfully close to that of Lemmy’s– you mix it in with the heavy metal guitar crunch and it’s hard not to think that the music was penned while Motörhead was playing nearby. “Fugue State” is another standout as it is the fastest and also the shortest song clocking in at only 45 seconds, it pays homage to the hardcore elders of the early ’80s, who were notorious for playing songs under one minute that were no slower than 200 BPM.

Higher Power is a showcase for the ’90s garage rock revival that’s been sweeping throughout the punk genre these past few years–honing their influences of grunge, indie, alt. rock and metal. It’s an album that proved many of my first interpretations to be false–it took many twists and turns in its runtime, which gave it its personality and kept me listening intently for the unexpected. For a debut album, these guys have proven their deservedly recognizable talent and the production is as such that it is able to show off their musical animation and not just have it be pounding noise. If you’re a fan of distortion fueled alternative rock with crisp melodies that slice right through the proverbial wall of sound, tied in with heavy and, at times, fast paced  tempos, and vocals that walk a thin line of insanity and stability, then this album will satisfy.