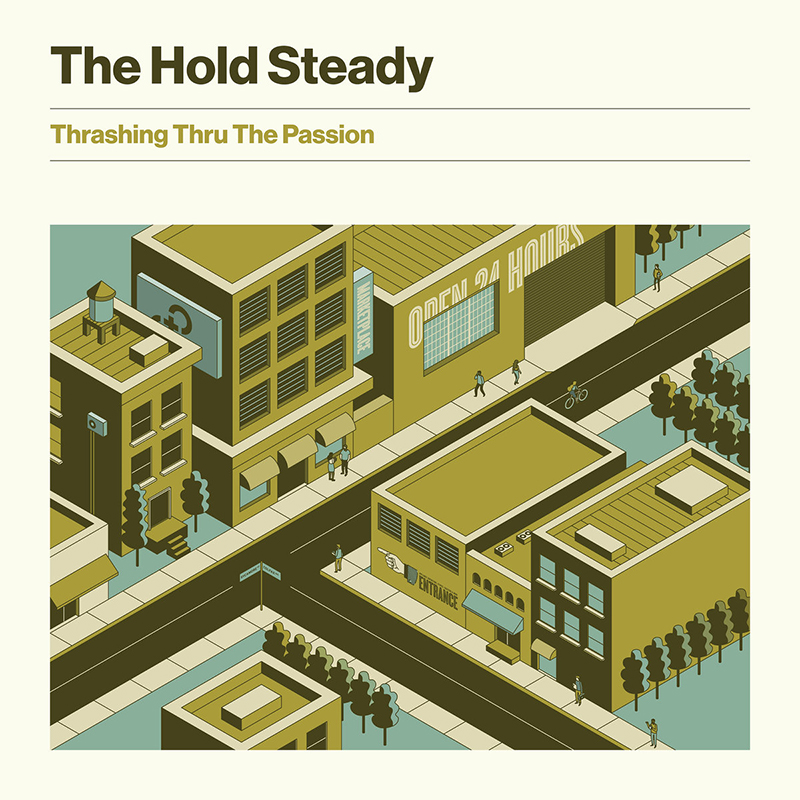 The Hold Steady | Thrashing Thru The Passion | Frenchkiss

Review: The Hold Steady – Thrashing Thru the Passion

The Hold Steady
Thrashing Thru the Passion

It has been five years since The Hold Steady put out their last record, Teeth Dreams, and subsequently retired from regular touring. In the time since, the members of the band have busied themselves by recording solo records and joining different touring bands. As their earlier records celebrated milestone anniversaries, the band responded with multi-night concert residencies in big cities across the country. These “Massive Nights” concert clusters have become a creative boon for the band, allowing them to collaborate musically in front of fans without the mind-numbing nightly slog of setting up and tearing down equipment that comes with a traditional tour. What no one predicted, though, was that this nontraditional approach to touring would also lead to a nontraditional way of creating an album.

Here is how it came together: half of the songs on Thrashing Thru the Passion were recorded in early 2019 at a studio in upstate New York. These are completely new songs that are exclusive to this release. The other half of the record consists of previously released material – songs that were put out digitally, one or two at a time, to drum up support before one of the multi-night concert residencies over the past few years. This is the first time any of the songs will be available in any format other than digital. It is a different approach to making and releasing a record. With how the band operates and with the entire music industry operating seemingly without a plan, different might just be the new normal.

Honestly, Thrashing Thru the Passion is a little bit shaky. It feels hastily thrown together, but that doesn’t mean it isn’t good. It still feels and sounds like a Hold Steady record should. There are songs that deal lyrically with the familiar themes of ordinary people in over their heads with love, life, drugs, careers, and finding themselves in unfamiliar towns. Much like Teeth Dreams, this is not an album where the songs intersect lyrically into any sort of an overarching narrative. The days of Separation Sunday and Boys and Girls in America are very much in the past. Still, part of me always hopes that band has one more good story-themed album left in them.

Former pianist Franz Nicolay is completely back in the fold, bouncing piano chords off of two different lead guitarists and the best rhythm section in rock music. This is where the album really shines musically. Craig Finn’s almost spoken-word lyric delivery is completely in the pocket in a way that only The Hold Steady can pull off, a fact that makes his non-THS solo work so hard to listen to. The first half of Thrashing Thru the Passion feels cohesive and powerful. The second half feels like it was made from scraps that maybe should not have been included here. They are (mostly) good jams, but they do not feel like part of the record. They feel like bonus tracks because, in many cases, that is exactly what they are. Though I would rather that the band had locked themselves in the studio until another half of the record had been properly written, I refuse to look a gift horse in the mouth. It may feel like an EP saddled with an equally long list of outtakes, but it still makes me feel something. And making the listener feel is what The Hold Steady have always been about.  –James Bennett