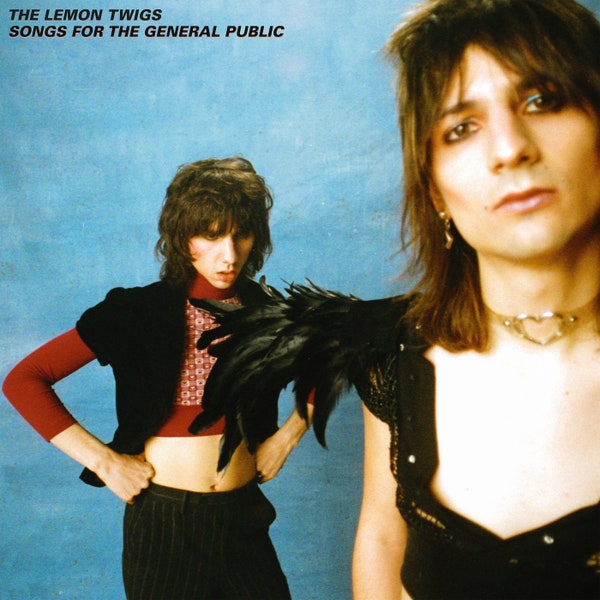 The Lemon Twigs | Songs for the General Public | 4AD

Review: The Lemon Twigs – Songs for the General Public

The Lemon Twigs
Songs For The General Public

The Lemon Twigs’ debut, Do Hollywood, was simply a throw-everything-against-the-wall-and-see-what-sticks type of album. It was an entertaining record, and most things stuck. On their sophomore attempt, the D’Addario brothers pushed all their chips to the center of the table by releasing a magnum opus rock opera about a monkey going to college with humans. That record was a thrillingly hilarious mind fuck. Now with their third release, Songs For The General Public, The Lemon Twigs continue to push ’70s pop-rock influences as far to the edges as they can.

Brian and Michael D’Addario’s influences are easy to pick out. A little bit Alice Cooper, a little Xanadu-era ELO, a healthy dose of Big Star and a hell of a lot of Todd Rundgren. They don’t hide it one bit. The best way to describe the D’Addario brothers and their band The Lemon Twigs is to imagine if Gilligan had a brother, and they were both stranded on an island with rock instruments. Throw in the fact that both brothers are superior at “out on the street/heading to the party” songwriting, and you have another record that goes down like ice cream in summertime.

Songs For The General Public was written, recorded and produced by the D’Addarios, mostly from their home studio in Long Island. the Lemon Twigs’ sound is a wall of everything that comes at you with zero subtle instruments or vocal stylings. The lyrics are electric rock anthems with twists: “I thought of us as angels / I thought of us as devils too” (“Hell On Wheels”); “You were my confidant / Now once in a while you haunt my dreams into nightmares” (“Hog”).

The stand-out track on the record is “Moon” with a little “I need to get out of here” Springsteen longing mixed with a little Long Island teenage angst. “Here is where you’re going to die / Oh, this town wasn’t made for you guys / And I won’t make my mother cry anymore.” This lyric comes in the middle of a strangling chorus of: “They say the moon look too long / Like a toenail tonight / So you hope it don’t disappear / Cause there’s something walking around in the pale moonlight / Make you feel like you gonna get out of here.”

I really do love this band. I love their tongue-in-cheek seriousness and their cheeky, nostalgic originality. I love the fact that they play to their style and influences with an intense fearlessness. It’s hard not to jump on the The Lemon Twigs bandwagon—it’s a great party.  I have no idea what kind of yellow brick road the D’Addarios are prepared to go down next. I’m kinda hoping for a double live album in full Kiss makeup. –Russ Holsten