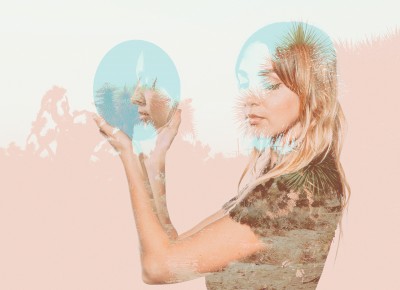 From the very first second Laura Burhenn’s rich, warm voice appears—literally as the first note of “All My Heart,” the transformative opening track off The Mynabirds’ multifariously divine third album, Lovers Know—it is exactly like hearing from a beloved, long-lost friend. When she confesses “Cos when I love, I love with all my heart,” and later that “I’d give everything I have for a minute more of this,” it isn’t just the devastation that her lyrics conjure up, it is the grand conviction in her voice. In other words, you fully believe what she is singing. In its simplest form, it is the language that—for better or worse—unites us all: love. In the few years between The Mynabirds’ debut (2010’s still divine-sounding What We Lose In The Fire We Gain In The Flood) and its convoking follow-up, Generals, she has honed that instrument to a lovely sheen. There’s so much happening sonically here, that she appears to have rematerialized on another musical sphere, yet the qualities of her artistry—her songwriting, execution and that voice—remain firmly intact.

I must confess to lately feeling a tad selfish for possessing the album for some time now and really taking my own sweet time in reviewing it. Of course, it wasn’t strictly a case of getting the album and not doing anything with it; on the contrary, I have both devoured and savored it, marveling at its rich tapestries of sound and style and frequently singing along—loudly—to it. Even now—nearly two months later—it is still revealing an intricate and intoxicating wonder. The aforementioned “All My Heart” also reveals one of the album’s greatest strengths: the great backing vocals—especially the male ones. Burhenn has certainly incorporated these before in her work, like when working with the great Richard Swift (producer extraordinaire of those first two albums) and her former duet partner John Davis, from their disbanded Georgie James partnership. But here they are more prominent and memorable, akin to seeing Burhenn when she presents The Mynabirds live as an entire band versus a solo entity; they enhance and complement her intriguing vocals and mostly come courtesy of producer Bradley Hanan Carter. Central to this of course are some great pop songs, with their memorably built-in choruses and custom sing-along qualities. Musically, the darker and intoxicating “Believer” sounds like a lost Peter Gabriel track, but sung by Sinéad O’Connor: infused with emotion and drama. There’s a lot happening in lead single “Semantics,” which premiered as an album teaser on NPR’s All Songs Considered a few months ago, and it remains indelibly solid. “You know I always feel half crazy / And I’m still here,” Burhenn fervidly informs her beloved before a dizzyingly catchy bridge lifts it yet again. This is how a pop song should sound. The spectral vocals of “Say Something”—from which the album’s title is derived—at first sounds like a ballad, but its impassioned lyrics (marvel at the imagery evoked by “I put our records on and played every song,” then, sadly, “but now the needle skips my favorite words”) its great drum track and its intoned male vocal chant take it in another direction.

The sheer grandeur of “Orion” is epic from start to finish and is a highlight on Lovers Know. As the drums pound to introduce them, stunted, pulsing keys at times sound combined with distorted vocals to take on an entire life of their own and help punctuate its lyric’s resplendence. Fans of Burhenn’s balladry will be thrilled with the intimate beauty of “Velveteen,” especially its delicately layered vocal performance, like when she begs “can you put me back, put me back, put me back, right back?” Then, rhetorically, “Am I real yet, real yet, am I real yet?” for an equally shivering and confessional effect. “Velveteen” is the first of three solid ballads.

Most interesting is when Burhenn experiments, like on the enthralling “Shake Your Head Yes,” which recalls an In The Garden–era Eurythmics and where she sounds like she’s having serious fun with her vocals. The Casio keys and programmed drums combine with its lyrics that at times bump into themselves—as though she’s talking to herself—not to mention an insanely catchy repeated “dum, dum, dum,” throughout which brilliantly recalls the beat. There’s even a great vocal pause at the very end, as if it is an unrehearsed take. Equally magnetic is the sing-along anthem that is “Wildfire,” with its hip-hoppy beat homage and daringly wild vocals—not to mention another killer chorus—all of which evoke experimental Kate Bush.

The next ballad, “Omaha,” is a gorgeous paean to her adopted home base and reflects her desire to return after her world travels as a touring musician, especially lyrically from her visit to South Africa, referencing lions and the “ruby-throated riches of the world.” What could potentially be schmaltzy in lesser hands, instead plays equally as hymn and sincere compliment. The last minute of gentle keys and vocalization are particularly pretty.

And then comes my favorite track, “One Foot.” For me personally—especially on a Mynabirds album—there always seems to be that “one” song that I obsess over and never tire of. On Fire it was of course “Numbers Don’t Lie” (which incidentally is still my most-played iTunes library track ever!), on Generals it seemed to be a tie between the title track and “Body Of Work,” with “Buffalo Flower” nipping closely at their heels. Now witness the magnificent “One Foot,” and I dare you to deny yourself that grandiose chorus. A defiant statement to a lover, boasting to follow wherever that love leads them, this song has it all and more. Note the especially effective backing vocals, which sound compressed and filtered and how they elevate Burhenn’s divine performance. While “One Foot” remains Lovers Know’s greatest apex, what surprises most is the ballad that follows it: the stunning “Hanged Man.”

A beautiful balance between balladry and sing-along beckons, with Burhenn’s lyrics full of richly realized equine imagery (“I’ll paint the ponies / if you ride”) while the haunting male vocals dolorously blend alongside her. It truly is a marvel to experience. The fine album closer “Last Time” is something of a reprieve then, sounding almost like tuning into a broadcast from outer space.  Burhenn sounds as though she’s coolly detached, especially with her Bowie-esque vocals, engulfed in small smatterings of handclaps and samples here and there, it’s akin to listening to a radio that’s not quite fully tuned in, but rather intriguingly beckoning.

With its kaleidoscopic sound and intricate flourishes and abundant with sing-along moments, Lovers Know is ultimately a road record. Burhenn’s instincts in entrusting new producer Carter (incidentally of LA indie band Black English) with her new sound pays off in unexpectedly rewarding ways. Without question this is a must-repeat listening experience, and headphones simply enhance more of its brilliance and hidden depths. Lovers Know is released on Saddle Creek on Aug. 7, and is available across multiple digital and physical formats, including limited edition blue etched vinyl. And just announced, Laura Burhenn and company return to Salt Lake’s intimate Kilby Court on Monday, Sept. 14!