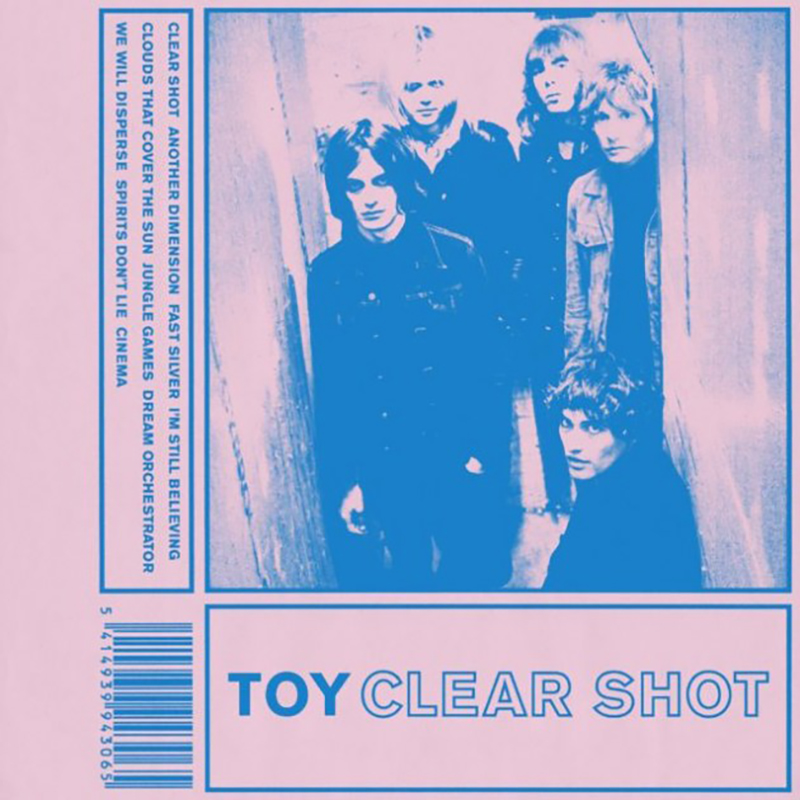 TOY’s third record, Clear Shot, turns out to be the band’s strongest and most consistent album yet. Having made us wait three years since their sophomore release, Join the Dots, the psychedelic English group leads us into the new composition with “A Clear Shot.”  At first, it’s ominous and up in the air, with wind and phasers shifting in stereo. But after a melancholy three minutes, the synthesizers come in with a drum kit holding up a heavy backbeat. It’s that in-your-face jam of Thee Oh Sees and that euphoric atmosphere of The Horrors. The drums keep up, and we know we’re in the depths of a brand-new TOY album. We’re hit over the back of the head with a psychedelic glaze, leaving a bruise that’s familiar and awfully colorful.

“I’m Still Believing,” the single off of the record, brings on that tongue-in-cheek romance first spawned in the early releases like “Lose My Way” off the first self-titled record. It’s always the lyrics like “She goes, I stay / And everything’s OK” that have us bashfully dancing and tossing our hearts up into the air. But as far as the rest of the record goes, it’s not as simple. “Cinema” turns out to be as melancholy as it is devastating. It’s a track that leads you in thinking it’s not up to much—the guitar dabbles in the air, and the vocals come out almost in a small murmur. But then, like the descent of a Valkyrie, clouds of a static atmosphere come in with waves of thick synthesizer.

On Clear Shot, there is a variety that  TOY has not before reached. Bringing in a whiff of Electric Light Orchestra, “Dream Orchestrator” comes in with not only the usual electric keyboards, but also a piano. At an enthusiastic tempo, the keys bounce off of the strings, bringing us to a setting where Foster’s Home for Imaginary Friends might be able to find a new, estranged domain. Staying imaginative, TOY bring us “Jungle Games” and “We Will Disperse,” two tracks consisting of all the newfangled sounds we love from the group but with moods that are a bit more contemplative than those of TOY’s earlier work. The band takes a bit more time to get their ideas across, and there are more guitar strums than from what we have heard before. The band is choosing not to ride off of their own coattails too much, but aren’t over-extending themselves either.

By the end of this record, listeners will feel that it immediately stands with TOY’s earlier releases, but also holds a place of its own. TOY have figured out how to handle their own sound—not abusing it, but still allowing it to flourish in its own right—and how to make three really good consistent records, which few bands are ever able to do. A fourth release might require that these guys take a larger step than they have up until this point, but for now, this release is in line with the band’s impressively fun music. –Austin Doty