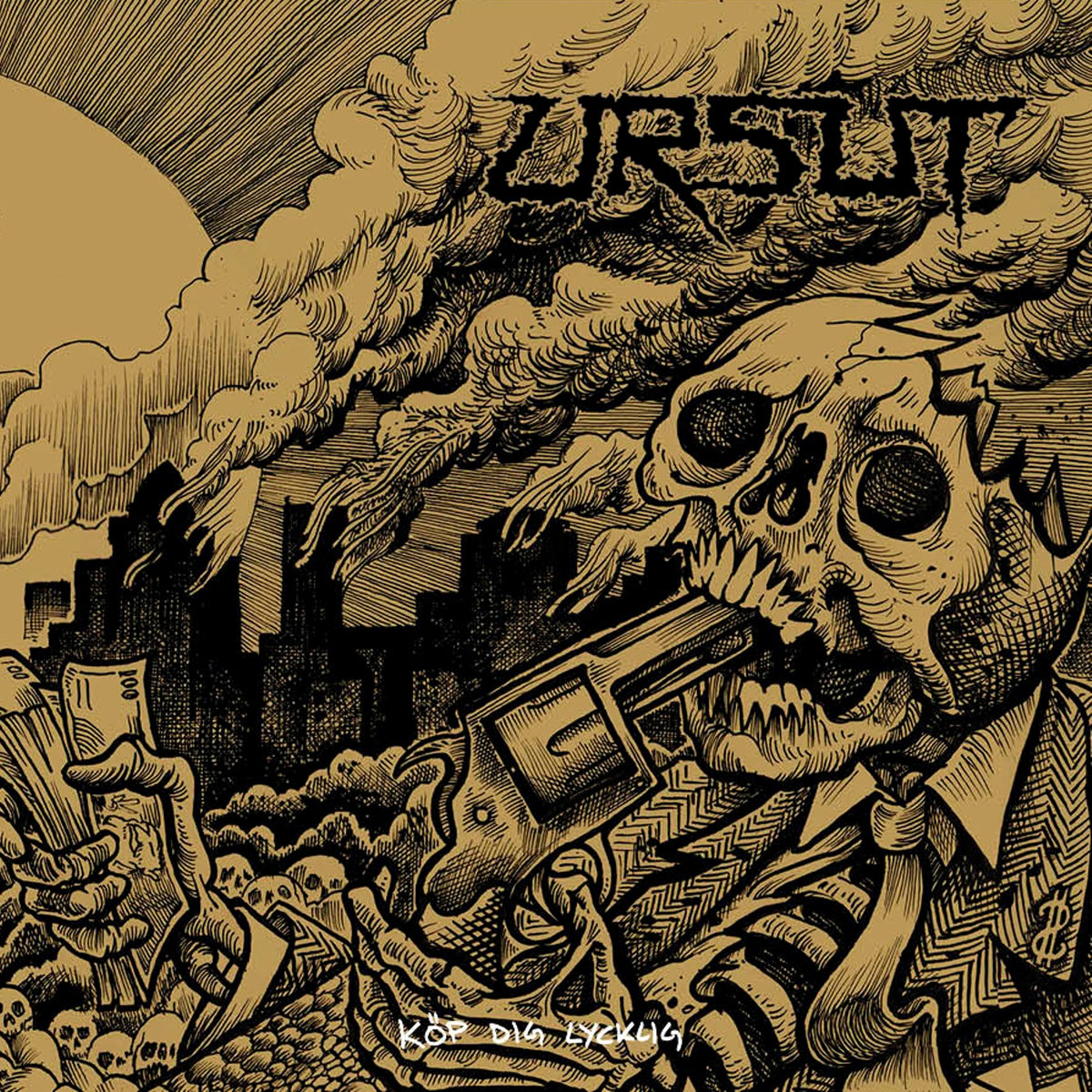 I have one complaint about Ursut: I wish I could fucking understand them! I mean, my God! This album is killer: 10 songs of crusty, metallic, d-beat glory that wallop you in the face and leave you asking for more! But, the entire album is sung completely in Swedish. While the band hails from the city of Malmö, it makes sense that they would sing in their mother’s tongue, but it is unfortunate for us non-Swedish-speaking individuals. Fortunately, we live in a world with the internet and Google Translate, making their lyrics easier to decipher, though it’s not 100-percent accurate. However, you don’t need a translator to tell you that this album is cryptic beyond all Hell.

In typical, crust punk fashion, Köp Dig Lycklig (Buy Yourself Happiness) contains multiple vocals, metallic guitars and minimalized drumming, which makes its lyrical delivery of capitalism, neo-liberalism, power structures and social stigma all the more pulverizing. The album opens with “Den Yttersta Dagen” (“The Last Day”), containing about 50 seconds of some eerie, industrial, mechanized noises, followed by the chiming of a church bell before it pounds into the opening guitar melodies with enough black metal ambience to send chills down my spine before switching gears to fast-paced thrashing.

The album’s themes of society’s overconsumption and conformity are spread throughout, but they really go for the throat in “Du Är Din Egen Elit” (“You Are Your Own Elite”) and “Vi Bara Lyder” (“We Just Obey”)—the two weave the cause-and-effect relationship of capitalism and conformity through consumerism with riffs and blast beats that pulsate like a triple bypass. The closer on this album, “Vem Är Monstret?” (“Who’s the Real Monster?”), takes Friedrich Nietzsche’s quote on how we can very easily become the monsters that we are fighting. The monsters in question that Ursut are fighting are the aforementioned themes, but they make the conscious effort of not letting the fight consume them: “For when you gaze long into the abyss, the abyss gazes also into you.”

To anyone who has found crust punk stale in recent years or to those who debunk it as just a cacophony of noise and indecipherable lyrics, I urge you to listen to Ursut—these guys have a lot to offer. Ursut, as well as most crust punk, may look incredulous on its surface, but if you dissect it through its rough exterior of distorted vocals, there are intelligible, well thought-out collections of words that act as the muscle for their bare-bones musical structure. –Eric U. Norris