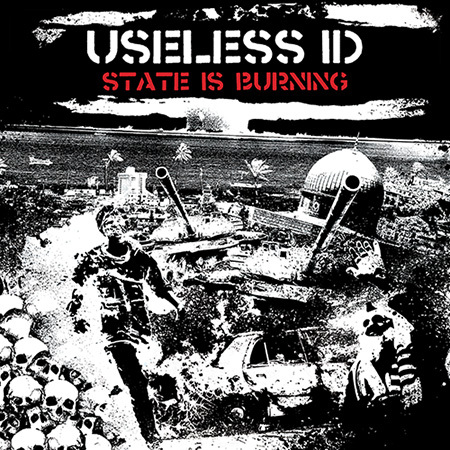 Useless ID have been working their asses off their whole careers, but it’s evident that they’ve been working double time on this record. State is Burning calls back to the band’s earliest influences with songs that say “fuck off to greedy, hateful, harmful and criminal politicians and the close minded, racist, orthodox state of mind.” With Useless ID’s return to their youthful hardcore punk sound and with Bill Stevenson at the producers’ helm, who has proven time and again that he can make any band sound fresh without straying too far from their sound, there is little to worry about.

The first track, “Land of Idiocracy,” doesn’t waste any time in throwing me into the fire. Right after a head-splitting yell from Yotam Ben Horin’s sandpaper-coated diaphragm, it plunges into a verse that says “fuck you” to something different with every line: “Fuck the country that just feeds irrational inquiring needs / Fuck the warnings in the mornings—I won’t bend.” It’s 59 seconds of pure chaos that pulled me in, strapped me down and kept my ears fixated on what was to come.

Useless ID have managed to find an even stability of frantic hardcore energy and prolific melodies, with neither one overshadowing the other. Horin, along with the backup vocals of guitarists Guy Carmel and Ishay Berger, holds brash vocals that match the frenetic drumming while still maintaining a melodic edge. Over half the songs on this album—like “Stopwatch,” “Genetic” and “Night Shift”—all adhere to this heavyset-melody formula without even reaching the two-minute mark, while “45 Seconds” and “Without a Choice” go fast, heavy and catchy all at the same time in under one minute. Apart from that are some songs with more gravitas, running at slower tempos and taking their time to leave their mark, such as “Borrowed Time.” “Detune” draws you in with its somber, acoustic first half before catapulting into the familiar, 380 bpm speed zone. The band members then pour their hearts out on “We Don’t Want the Airwaves,” a direct homage to the Ramones and tribute to the fallen drummer of Teenage Bottlerocket, Brandon Carlisle. The lyrics convey the boys finding solace in the Ramones’ music, a chorus comprised entirely of Ramones song titles, and the closing lines, “Hey Brandon, are you hanging with the Ramones?”

After skyrocketing out of Israel 20 years ago, Useless ID made names for themselves in their native land’s punk rock scene. These guys are some of the most dedicated punk rock bands that are active today—members have come and gone, each one having poured literally their entire lives into this band. Through their at times rough but never boring lifespan as a band—after sticking it out through lineup changes, intense touring schedules, basements and arenas, tour buses and hitchhiking, famine and feast, seven albums and three record labels—they present to us now their second release on Fat Wreck Chords. State is Burning is their most pulverizing record to date. –Eric U. Norris