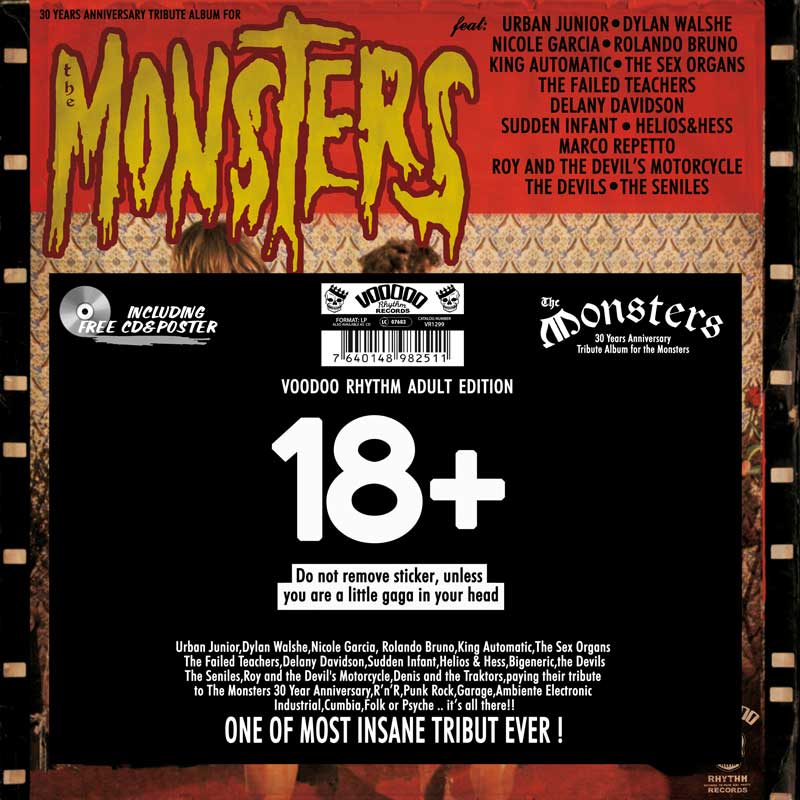 The Monsters: Burn In Hell is a compilation featuring some of the best bands in the business to celebrate 30 years of The Monsters. Coming out to celebrate an infamous band like The Monsters is no small feat nor easy task. It is an undertaking that requires drawing on the brutally raw nature of bands like The Devils or The Sex Organs.

To play for The Monsters, each group performs a song that they would consider their favorite by the legendary group. In doing so, each band draws on their respective talents for this compilation. It is also of note that each band has a personal connection to The Monsters and are held in high regard and treated like family.  It is therefore not surprising that these groups carry on a sound that emphasizes the beauty that defines Reverend Beat Man’s label Voodoo Rhythm Records.  To be fair, there are probably many who may read this in Utah and the surrounding region who have yet to bear witness to this labels’ unique sounds, much less anything by The Monsters. So lets say that what is on this compilation is unlike anything that has yet to assault your ears—with maybe an exception for anything from the Memphis, Tennessee—based label Goner Records.

The Monsters should have your full attention. They are a group that redefines that separation between the truly rebellious nature of subculture and that of one stuck trying to be something that they are clearly not. Again, this compilation is a celebration of everything that demands a lifestyle of unique ability and a “gimme danger” attitude.

As with any recording that boasts the impressive ability of groups giving it their all, there are those that stand out.  The opening track, “Dead End Street,” performed by Urban Junior, captures a certain sound characterized by electronic desolation, and my god, it is delicious. Nicole Garcia’s take on “Baby Ok” is hauntingly beautiful and could be something out of the 1940s—like The Paris Sisters— but with a dark and sinister element.  King Automatic’s “Pony Tail And A Black-Cadillac” has the dark garage rock blues down, and is perhaps the closest-sounding track to The Monsters’ ravaging sound.  Newcomers The Devils’ “More You Talk” is a furious barrage on the senses.  The Sex Organs’ “Black” is simple and abrasive and comes to a close second to the sound of The Monsters. It should be noted that The Sex Organs have Jack Torera of The Jackets, so there is some similarity between the two, but the former is much more raw sounding.

This compilation is not for the faint-hearted.  Rather, it’s for the true believers of the sinful and highly agitated rock n’ roller. In other words, this music is the real deal, and not in any way dumbed down.  If you move forward and have not checked out Voodoo Rhythm Records or The Monsters before, this is a good introduction. By all means, pick this up—it’s pure and sick, just like music with a sound that barks and bites is meant to be. Now go pick this up, get a taste and dig these grooves. –Nick Kuzmack