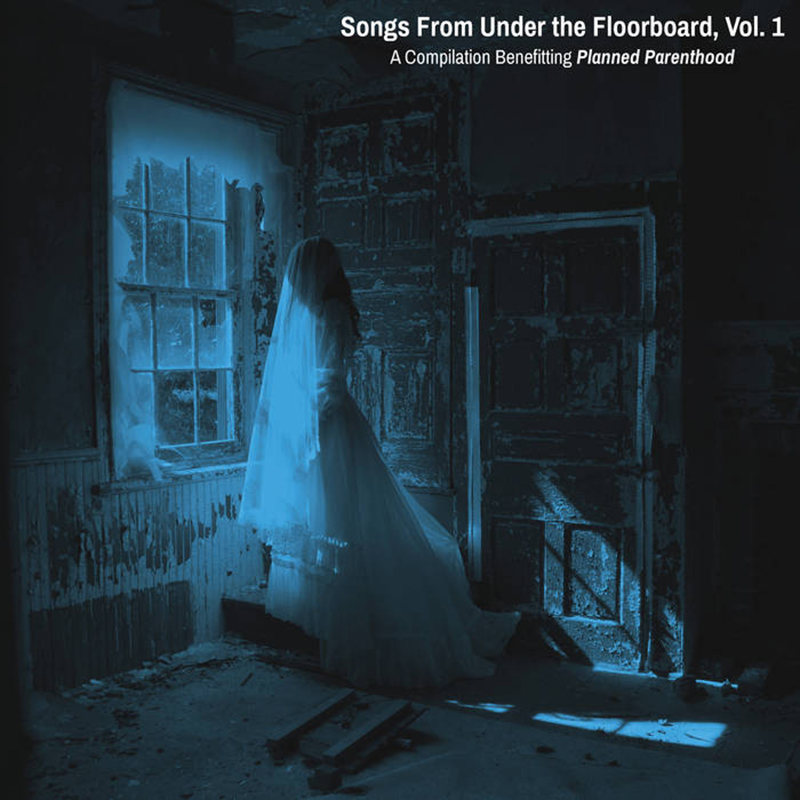 Various Artists | Songs From Under the Floorboards | Accident Prone Records

Review: Various Artists – Songs From Under the Floorboard

Various Artists
Songs From Under the Floorboard

Accident Prone Records
Street: 04.04
Songs From Under the Floorboard = All your favorite goth and post-punk bands

Post-punk and darkwave have long held a grip on music lovers’ hearts because at some point in time, anyone can find validation for their shitty, fucked-up day/month/adolescence if they just find the right song, and nothing works better for pain than dark music. Sometimes that song is spooky and intense, like something by Sisters of Mercy or Clan of Xymox, perfect for dancing away the pain in a goth club, or maybe something spidery and dry like Wire. So, we keep coming back for more, and luckily, musicians continue to be inspired to keep figuring out ways to make post-punk and goth their own. This is what inspired the Portland radio show Songs From Under the Floorboard, conceived of and DJ’d by Dave Cantrell, a show all about post-punk, new and old—but it’s the new that makes up this compilation of the same name.

The compilation moves in many different directions and shows off the unshakeable allure of traditional post-punk and dark-wave motifs—like the slow building, Cure-like guitars on “Youth” by Richmond, Virginia’s Shadow Age—and some of the other moods and aesthetics that can be achieved in post-punk music. Every artist aligns with different figures from the past while bringing something new to the genre with their relative youth and, in some cases, their relationships with today’s world. One of my favorite songs on the compilation is “Modern Age,” by Annex, who are from McCallen, Texas. Annex recall rougher bands like Killing Joke and the song’s lyrics, sung by vocalist Nikole Valdez, are barks of goth existentialism, the kind that shrug off “power over mankind” as quickly as the song’s own rhythm flashes along, like an urgent warning. The band has stated that listening to and playing post-punk have been creative escapes from their South Texas community, which is often home to racial tensions.

Portland, Oregon’s Vice Device and Michigan’s Forever Grey follow along the same aesthetic lines as other contemporary acts like Ritual Howls or Tropic of Cancer with their drawn-out, sometimes industrial or atmospheric songs. There’s also no lack of deep-toned vocalists and the brooding soundscapes they always pair off with—Berlin’s Golden Apes and Salt Lake City’s own Sculpture Club bring the traditional goth mood to the album. Los Angeles–based Ghost Noise does the gothic romance element best, though, with a stormy duet about torn lovers that was pleasant for its drama. Bernay’s Propaganda, who are from Macedonia, move almost into the psych realm, but “Nisto Nema da ne Razdeli”—featuring former Minutemen and Stooges bassist Mike Watt—is as dark and mysterious as any of the other songs on the compilation. Also present on the compilation is one very vampiric track by Valencia, Spain’s perralobo, and a very X-Ray Spex contribution from Otzi of Oakland, California.

This is the first edition of Songs From Under the Floorboard, but it’s hopefully the beginning of an annual tradition. Profits will benefit LGBTQ and femme-oriented service organizations, such as Planned Parenthood, where the full amount of digital sales from this first volume will be directed. Songs From Under the Floorboard will be released April 4 via Accident Prone Records, so go get some new favorite goth bands and help them help a good cause along the way. –Erin Moore