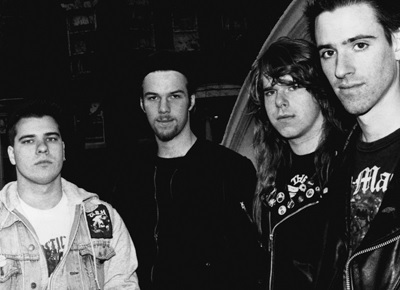 I love New York hardcore, but I hate the XXL basketball jerseys, track suits and gold chains. I love thick-neck hardcore with gnarly breakdowns, but I’m so bored of bands where the singer slowly yells “muuuthafuuucka!” in his best hard-ass voice right before the mosh part during songs about the mean streets, the crew and shit. That’s like, so Biohazard, dude …

[Wrecking Crew]I think the Cro-Mags and Warzone have about five decent songs between the both of them, but trying to act like tough skinheads from New York while simultaneously pushing the Krishna/Christian lifestyle is confusing and annoying (not to mention their overuse of wailing cheesy metal solos).

Why even bother listening to the eight millionth NYHC band that perfectly fits the stereotype of the NYHC band when Wrecking Crew did everything they did but twice as good, even though they weren’t even from the Lower East Side?

While the Cro-Mags and Warzone marched full-on into bad metal territory, Wrecking Crew stuck to fast, tough hardcore with totally moshable breakdowns. While a lot of NYHC bands had lyrics of questionable intelligence, Wrecking Crew’s were pointed and angry, but well-penned, too.

Hardcore that’s thuggish but not moronic sounds like an oxymoron, but Wrecking Crew made it possible. The 1987-1991 semi-discography has their demo, EPs and live songs. Sadly, it does not include their excellent “Balance of Power” LP because Roadrunner Records owns that, but it’s still worth having. Or if you’d rather, I can show up at your house with a pile of Hare Krishna leaflets and a baseball bat, muuuthafuuucka! (Bridge 9 Records / 35 Congress St. / Salem, MA / 01970 / www.bridge9.com)