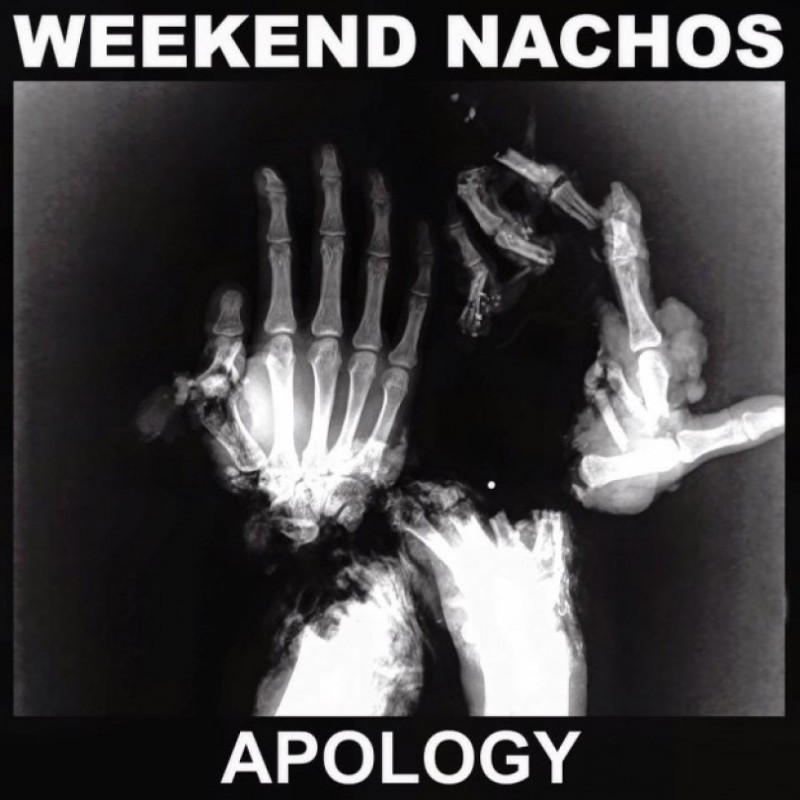 The original jock powerviolence band is responding to fans mourning the New Years’ Day announcement of Weekend Nachos’ dissolution with their final album, Apology. Hailing from DeKalb, Illinois, Weekend Nachos channel the grit of hometown powerviolence great Charles Bronson in their new album. The lineup on the final album of the grindcore/powerviolence mash-up unit features original members John Hoffman of Spine and Harms Way on vocals and Andy Nelson on guitar, as well as Drew Brown on bass and Brian Laude on the drums. To compose Apology, Weekend Nachos pulled in several guest musicians, including some from genres outside hardcore.

Weekend Nachos take a heavier approach to powerviolence than the average band—and it works. Having formulated a unique sound, the band felt a lot of pressure to produce the excellent final album. “I was nervous the whole time we were writing it, because it was like, ‘This is it … This is our swansong. I hope we aren’t scraping the bottom of the barrel here,’” Hoffman said of Apology in the album press release. “Truth is, we did scrape the bottom of the barrel, and it was the very last of the great material we’re capable of.”

The album opens with “2015,” a track that begins with quick, pulsing drums smothered in noisy feedback. In addition to Hoffman’s bellows, Matt Barnum and Matt Izzi of Homewrecker join in on the track to echo Hoffman and contribute repulsive screams. The nearly six-minute song slows to emphasize a heavy bass as it marches into obliteration.

Dylan Walker of Full of Hell throws his vocals into the ring with piercing wails on “Dust.” In this song, as well as throughout this album, Weekend Nachos continue with their pattern of commenting on scene politics with lyrics like, “Meanest and toughest guys around / Kicking me on the ground.” The band also seems to address their opinion on larger politics and how they play into the scene with the songs “Fake Political Song,” “All,” “Dog Shit Slave” and “World Genocide.” Weekend Nachos step off their soap box to say a word of farewell to their fans in the song “Eulogy.” Hoffman roars loyally over militant drums, “My dear friends, our time is done / Time to move on, did we have our fun.”

Apology closes with the harrowing title track. The song features an instrument rarely heard in powerviolence, or even hardcore: the piano. The pianist on “Apology” is Mike Kinsella of emo band American Football and solo project Owen. “Apology” is the longest song on the album, haunting listeners for nearly 10 minutes. The ghost of Weekend Nachos is woven into the chord progressions played in a minor key as Kinsella pays tribute with his fluttering fingers. At about six minutes, the volume rises drastically and Weekend Nachos go out with a bang, or rather, with Nelson and Brown serving the band’s traditional punishing chords.

Weekend Nachos are currently on their final tour. The band’s closest stop is on May 26 at Rainfest in Tacoma, Washington. In the album notes, the unit writes, “Don’t cry for us, we’re already dead.”

After over 10 years as a band, Weekend Nachos have produced the perfect final installment to a robust discography. With its raw vocals and flawlessly dissonant composition, Apology is sizing up to be the hardest powerviolence album of 2016. —Emily Anderson